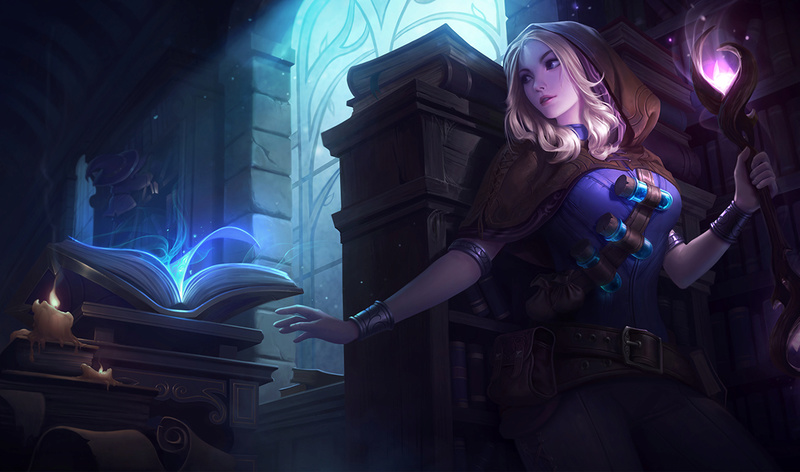 Type of Character: Human
Name: Lori Iolar
Alias: Bride of Ammos, Lor, Blondie, Poppet (by her parents)
Age: 25 years
Gender: Female
Sexuality: Heterosexual
Personality: Lori Kat is the young adult who embarrasses herself much too often. Although generally bashful and introverted, this human is naturally an affectionate person who enjoys spreading love and making everyone feel special. This usually ends up embarrassing her or her "victim" since it can come across that she is flirting. It can also scare people away, since it can appear suspicious that she tries to be happy all the time. It can be assumed that Lori has an ulterior motive, and she knows this. It is just an unfortunate fact of life. You cannot trust everyone, and not everyone will adore you.

Lori is very emotionally sensitive. It is easy to make her cry or turn her good day into a bad one. She tries to be as unselfish as possible, so when she discovers that there is a part of her that someone isn't satisfied with, she takes it hard. It is actually pointless, and she over exaggerates often. She has good friends, and she hasn't learned to acknowledge that it doesn't matter what other people think, as long as she has a shoulder to lean on and as long as she is an encourager herself.

Although most of Lori's anxieties and fears can be over exaggerated, a lot of the things she worries about can stick to her for days. She also never forgets a mistake she made and frets that she may repeat them out of foolishness. She also never lets go of someone else's shortcoming and is capable of holding a grudge, even though it's not visible. This is especially so when someone did something against her.

Due to her anxiety, Lori Kat is usually hesitant about asking questions or making requests, sometimes even speaking to someone in general. She is afraid of appearing clingy, annoying, and just doesn't want to disturb an innocent fella. When Lori has an anxious fit, she has a variety of antidotes: painting, baking, and interaction. A chat with a friend is almost always enough to bring a smile back to her face.

Although it is said that Lori is shy, she isn't soft spoken. She often speaks with positivity. She is only shy regarding to her reluctance to approach someone, even if it is to forge a friendship. What if they think that she's weird?

Personality Flaws:
~Lori is very affectionate, which can be a good thing, but can lead to embarrassing moments with herself or others. People may also think she is manipulative due to her jolly exterior.
~Lori has quite a case of anxiety, which can hold her back from things that can make her happy or help others.
~Once a mistake is made, Lori has a hard time forgiving and forgetting, which can make her hold a grudge.
Fears:
~Being selfish without realizing it
~Parasites
~Illness
~Being lonely
Strengths:
~Lori Kat is amazing at painting. This includes water color, oil, and acrylic. She is especially proud of her impressive skills with oil paints, as not many can understand or have the patience to wait for the paint to dry.
~Lori is good at working in shows like plays. Even though she never performs, she is often used as a stagehand.
~Lori is positive and enthusiastic, which has a chance to motivate discouraged people around her, although it depends on the person.
Weaknesses:
~Lori cannot fight well. She is capable, but due to only recently learning how she is not much of a formidable opponent in combat.
~Lori has sloppy handwriting. Sometimes even she has trouble reading it.
~This human is rather weak willed, especially when a situation seems hopeless.


General Appearance
Height: 4'7 ft.
Hair: Lori has reluctantly trimmed her hair, since its long length had previously gotten in the way of everything. It now falls a little past her shoulders. It's golden blonde, with very few red hairs that are only noticeable in the sunlight, where Lori's hair appears a bit strawberry blonde due to the light hitting on the auburn strands. In the dark, however, it looks more like a silvery blonde.
Eyes: Blue
Appearance: Lori has a small and slim shape, now clothed in attire fit for an adventurer such as she. She wears a blue shirt with darker pants, held up by two criss-crossing belts, one of which holds a satchel. There's a strap around one shoulder that goes diagonally across her body, holding vials and two coin purses. She wears a brown hood over her face, the cloth having a bit of purple on the edges.

Two silver bands adorn each of Lori's arms, one at her elbow and the other at her wrist.

Lori has a small build, and her pregnancy only changed that slightly. She has more curves due to birthing and nursing three daughters, but when she starts adventuring again she will become her stick-figure self once again.

Skills and Abilities
Skills
~Lori, as said before, is skilled at painting, although this holds no aid in combat.
~Lori is often used to clean blades and armor when she is helping her father, who is a blacksmith. This isn't really used in combat either, but it can help someone else, I guess.
Equipment:
~Lori's father gave her a small short sword to defend herself with in case of emergencies. It's not quite a dagger, but not the size of a magnificent sword either. The blade is now sharp and can scratch armor, but it takes a few blows before she can slice through. . . Around six or eight strikes. It can cause bleeding if Lori feels the need to use it on another person, but it is ineffective against dragons.
Combat Style: Lori would often try to get out of a situation without resorting to violence, as she is a pacifist. If she feels threatened she would try to attack her opponent with her small sword.

Background
History: Lori was born to two travelling merchants and an older sister: a blacksmith, a weaver, and a strategist. Lori was raised on the perilous roads, and has picked up painting as a hobby. In his youth, Yorik called himself a warrior and adventurer, and although he had gained scars, he never travelled far from home. He only did this for around a month before he met Kagura, who was a travelling merchant. With her became his new home, and they had Ora. Four years later they produced Lori.

Lori is now happily married to Sul Iolar, and she is pregnant with his children.
RP Sample: Optional.