Looking for the next Rule (Open to IceWings and SeaWings)

Looking for the next Rule (Open to IceWings and SeaWings)

(This topic is to decide who the leader of tye Gifted Crystals are, let it be one or two for either clans.)

It was midday, the land between the ice and sea tribes was brimming with life as the temperature was never too hot or too cool but rather the perfect set for warm and col blooded creatures. Gemna had ordered some of his students of magic to find help and build an area of meeting, since the Ice territory would too cold or the Sea too warm, so Gemna had made plans ahead of time. Barely anyone knew who he was, the rumors of a mad dragon living in a glacier had spread by some... Ex-students banned from the teachings, which made them loath Gemna. He cared less though.

Nearly a year ago he had made plans for a new leader for the Ice Dragons anyway, knowing that leaders come and go almost instantly, however when the merge began he had to accelerate the said plans. As soon as the area was finished in a deep woods he looked it over. It was large, like an open collusium, it could seat a hundred or so, that was good, and little tables between each seat would food and drink for the dragons.

About a week ago Gemna sent letters of invitation to everyone in the tribes, each one of exact words:

"To those of great concern,
I, Gemna of the IceWings will uphold a meeting, and I do beckon you to come for whoever shows will help decide the future ruler(s) of the Gifted Crystals. No doubt, we cycled through so many rulings and any of them yet to stay longer than a year or so. It has come to my attention that we must have a leader, already the Earth and Night and Fire tribes had joined forces, and rumor of Sky and Light tribes have done likewise and each are growing rapidly. Please, do come to the Breeze Isle, directly in the center of tye Dark Woods,

He arrived to the area and landed in the center, taking in a breath of coolness. It was time for the deciding of a new leader, he was already a scroll keeper and "court mage" so he had different duties to attend, but he wanted a dragon best for both people of each tribe. 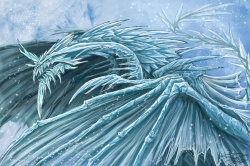