Alone (Open to All)

Alone (Open to All)

Typhoon looked over at his sister as they walked along. Cyclone was never this quiet, and it was starting to get him worried. "Are you ok, sis? You're usually the one talking." The dragoness simply lifted her head, looking at her brother. Cyclone really didn't want to talk, but she couldn't avoid her brother even if she wanted to.'I.... I miss them.' Typhoon simply nodded. "Same here. How about we find somewhere to get some shut eye?" It wasn't anywhere close to being night, but the twins hadn't slept well in a month, and it was really starting to show. Cyclone just nodded at she pointed towards a rock that was big enough for them. She soon breathed fire all over it to make the piece of stone nice and warm. The pair then curled up, using their wings and tail fins to cover their shared body, and soon, both were asleep.
_______________________ 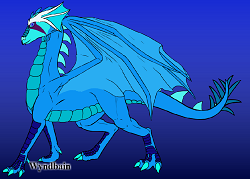 She smiled at the two. "its okay!". then she heard the blue dragons question. "um..well", even though that it was pretty clear that the armor that she was wearing came from the humans, so she just said her name. "My name is Albino. I know its a weird name for a dragon because the humans named me like that."

She followed the twins, still holding her paw. she wondered how long it will be, since her paw started to hurt a little more. She was about to ask couldnt they just fly there, but she remembered that the humans did teach here how to fly since she was a captivy since she was hatched. These wings were useless to her, so she continued to follow along. as they were walking, she looked around, then, without hesitation, she saw the same squirrel at the tree, looking at her. She gotten annoyed a little, but she ignored it anyway and follow along.

Typhoon looked back at Albino. He was worried about her paw, not really knowing how to help. He then went Cyclone stop them in their shared tracks. Typhoon quickly looked ahead, seeing the small pond. Cyclone then looked back with a smile on her face. "We're here!"
_______________________

"Finally!" she smiled with delight as she trotted to the pond. When she was at the pond, she carefully layed down and put her paw in the water. She felt clam and sighed for it. "Thanks for walking me here, ill be sure to own you two something" she then looked at the blue one, smiling. "you wanna come in?"

Cyclone and Typhoon both smiled at the comment as the walked into the pond. "Hey, don't mention it."Cyclone may not have liked swimming, but, ironically, she love the water. The pair soon laid in the pond, with Cyclone resting her head on the edge of the water, and Typhoon looking around.
_______________________

She smiled as she looked at them. it seemed as they were gonna be life long friends, and she wanted to. The thought about her paw and humans soon faded away, but not forever. she then looked at the blue one, "you okay?" she asked, a little worried.

Snowscale wasn't sure what to do. Land and risk being noticed? Or slip away? He growled softly to himself at his indecision, then finally made up his mind and landed in a tree to evade detection, hoping fervently that his ice-blue scales didn't give him away.
Hopefully I pull this off and they think I'm just a small nervous hatchling... he thought.

Typhoon continued to look around, but noticed some tree branches moving, and a pale blue color slipped through some of the leaves. He went stiff at the sight, something that Cyclone took notice of, her read eyes looking at her brother as lifted her head. "Bro? What's wrong?" Typhoon didn't move a muscle, but he gave an answer. "There's something or someone else here."
_______________________

Don't move don't move don't move.... was his only thought the instant one of the two heads turned towards the tree. He had no wish to harm anyone, but if need be he was prepared to defend myself.
Snowscale shut his eyes and hoped that if he did enter combat that he would not hurt anyone too badly.

Albino quickly gotten up and backed away a little while her wings opened.

Hopefully this isn't a monster, or humans, she thought.

She then looked at the two twins," um guys...ill b-be back. stay here". She slowly backed away from the water. If it was a monster, then it would probably rip them to shreds. If it was humans, then they would capture her, since they were still looking for her.

She hoped for the best as she sliently ran away.

When she was alone, or she thought, she sighed with relief. Then...she heard footsteps, like quiet footsteps. She backed away again, preparing for the attack.

"huh? I could of swore that I heard someth-" she gotten hurt by a blowdart. Before she could roar for help, she already fallen asleep. It was the same humans that keep here in captivity, and that was all she could remember before she fallen asleep.

The humans loaded her on a very large wagon, and took off with her. since she was heavy to the horses, they took of slower than they thought

Cyclone simply gave Albino an odd look while her brother continued to watch the spot where... whatever it was was at. He thought about what it could be, but he had an idea, if his sister would agree. The pair's tail began to twitch and jerk. I want to try getting that thing to move, but we may need to go underwater.

It won't be swimming, just ducking our heads down.

Uh oh. was Snowscale's first thought.
Slowly he lifted his wings and shot out of the tree, landing neatly in front of the twin headed dragon.
"If I tell you my name will you tell me yours?"

Both twins eyed the dragon, shocked by the bold move the dragon used, but soon got surprised looks as both began to realize they'd met the dragon before. Cyclone quickly spoke up after she realized who it was. "Hang on! You're the dragon who let us stay in your cave for a night."

Typhoon let a slight smile come to his maw as he remembered the dragon's name."Yeah. Snowscale, right?" He then turned his head back to tell Albino, but soon found that she wasn't there, quickly asking his sister if she knew where the white dragoness was. "He spooked her, and she ran. Now that I think about it, we may want to find her before something else does. Especially with he bad paw."
_______________________

The men where not even halfway to there kingdom, but they were patient.....except for one.

"Boss...arent we gonna celebrate?" the male human asked the lead hunter with a concerned look. The lead hunter turned his head to the other human.

"Remember last time we tryed to catch the white one? Well...a Thunderbird came and killed Paul with its lightning. Do you want that to happen to you?"

"Well then....if i were you, then i would shut up before any of her little "friends" come and rescue her."