Latest topics
» Something to Care About
by Abbadon Today at 11:22 am

Alias: (Your dragon have an alias that they sometimes go by? An alias is something that also either named after what they are good at, or an adjective or descriptive phrase expressing a quality characteristic of the person or thing mentioned. Also known as an epithet)

Age: (How old is your dragon.)

Personality: (What is your dragon's personality? Please make it detailed.)

Fears: (What does your character fear? All dragons have at least one fear, and nobody should put None or N/A. It can be a phobia or whatever.

Strengths: (What is your dragon good at? Both physical and mental strengths must be included)

Weaknesses: (What is your dragon's weaknesses? All dragons should have one, if not more.)

Height: (How tall your dragon is)

Scales: (What color and how is it designed)

Appearance: (Your character's general appearance. Weapons and other accessories must be included)

Tribe: (Which one of the 7 dragon tribes does your dragon belong to)

Inheritance: (Are you a pure breed of your tribe, or crossed? If so, what's the cross?)

Rank: (What rank is your dragon)

Family: (Does your dragon have a family? Who are they?)

Mate: (Your dragon's mate. You may put N/A if you do not have one)

Hatchlings: (Does your dragon have any children? Put N/A if you do not)

Special Abilities: (Any unique abilities that your dragon has that no other dragon has? Make balanced powers)

Combat Style: (How does your dragon fight? Does he/she have a specific style of fighting?)

History: (What is your dragon's backstory?)

RP Sample: (Provide a RP sample of how you would roleplay. Optional)

((you guys will have to forgive me cuz I only have a phone to work on and my notepad won't wave the entire passage and btw are white dragons even allowed? She's a 100% Water so just curious)) 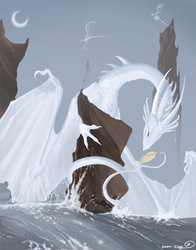 Re: Neva the Sentry WIP

Since this isn't ready for review yet you should put WIP in the title until you're finished. And welcome to the site! ^.^ If you have any questions, let us know.