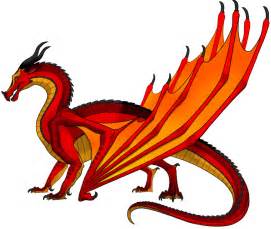 Type of Character: Dragon
Personal Info
Name: Adeen
Alias: Healer Adeen
Age: 31 years
Gender: Female
Sexuality: Straight
Personality: A strong willed and kind hearted Healer, Adeen is many things other then being smart. She is protective of her tribe and sees many of them as her brothers and sisters. She is shy however. She is also trustworthy, but not with your deepest secrets. She also has terrible anxiety, hating the dark. Sometimes she gets trapped with fear, unable to do anything.
Fears: The Dark
Strengths: Healing: She can heal anything from a cut to a broken bone
Stamina: She has great stamina
Weaknesses: Leadership: Adeen rather follow then lead, as she hates being the leader.
Stealth: Adeen is very Noisy

Tribe Information and Status
Tribe: Rogue
Inheritance: Half ~ Half Firewing, Half Skywing
Rank: N/A
Family: She doesn't have a known family
Mate: N/A, Doesn't want one yet
Hatchlings: N/A

Skills and Abilities
Special Abilities: She was born with too much fire. Her skin is burning hot and no one can touch it. This ability is uncontrollable, she cannot control how long it goes for. It actually stays on forever and is hot enough for dragons to be burnt while they are standing close to her.
Combat Style: Adeen prefers to blast an opponent with her fire-breath, however it is too weak to do much damage. She likes hand to hand as she can burn her opponent.

Background
History: When she was layed, No one knew that she would have too much fire. When she hatched her parents looked at her in disgust. Then, that night they left her in that cave, Abandoning her. She didn't know what to do, so she stayed in the cave, Eating whatever came close. From then on she learnt all she could about healing. She then found a dragonet who was cold and tried to pick him up, but ended up killing him because of her heat.
(Rp sample can be found on Berde) 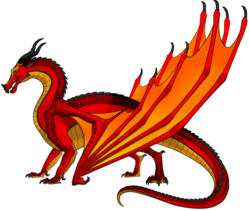 Hi there. I see you have fire breath. You should mention your fire breath is only half as powerful as a pure bred FireWing. And your special ability, is it constant, or can she control it and make her skin hot when she wants to? If it is the latter, you should add how long she can do it for and how hot just skin actually gets.

Also, as a Rogue, you don't have a rank.