"Heh, it's been forever, everything looks so much different," thought Soul, hiding in an ally in the suspended city.  It was dawn, and some dragons were up early minding their own business in the streets.  Soul, however, mischievous and elusive, sometimes makes a sport of evading the guards.  Though he never really has gotten caught, let alone spotted.  But, this time, he thought he'd be especially obvious, that way, perhaps he could sweet-talk himself out of being banned.  Perhaps if he made an appearance...

He thought this just as he was finished reflecting upon his new athleticism from eating a healthy diet of fish and traveling a lot.  He had been much more upbeat, and was daring for an adventure.  Much pain and struggle we're behind him now, but he was getting hungry.  He notices, however as he's contemplating, a fair merchant selling fish out of the corner of his eye, "Perfect!  That'll catch the guards attention...". Though for some odd reason he never thought to just ask them nicely, he had to be over the top mischievous.

Anyhow, he then snuck up behind the merchant and bit a large portion of fish from the stand and darted into the open.  "Help!" Cried the innocent merchant, Soul chuckled swallowing his fish as he looked behind him, and dashed elusively into another ally.

He peered from out of the ally and saw her talking to a guardian, "based on your description ma'am, we think we know who your thief is, we'll summon someone to take care of that for you..."

Soul was elated, they recognized him.

Sephtis had received his first actual mission. It wasn't an actual kill mission, but it was his first mission none the less. He was told to capture the target uninjured. It was a local thief that had just recently been caught. The thief had last been seen by a fish merchant's stand in the nearby square. He retracted his claws and leapt onto a roof. He crawled almost silently across the roof tops gliding across them when needed. Suddenly he spotted the thief. Sephtis leapt down aiming for the thief with his right paw headed for the other dragons head and his left ready to pin down the thief's neck. The adrenaline rush from the leap was amazing! He could get used to this. 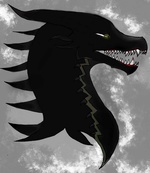 Soul heard crashing sounds from above on a rooftop, he darted away just before the unknown dragon crashed down upon him... For a brief moment he paused to see behind him to see if he was going to be chased then dashed off, the expression on his face didn't make Soul very happy. He was a bit startled, not expecting that to happen, at least not from above. He was also quite anxious to get away, the chaser seemed quite aggressive and angry. After exposing himself and bumping into a few passersby in the open, he jeered left into a more open alley, one not so enclave, yet it was. He found himself in front of a wall, then looked up to see the bright yellow clouds and sky blue sky. He readied his wings.
_______________________
ﬥ

He had missed! As he hit the ground he rolled forward hitting the wall and continuing his forward momentum to rush out of the alley. He was upset about missing the first jump, but he brushed it off and kept moving. He leapt and glided over the startled crowds. He just barely saw his targets tail slip into an alleyway on the side. He knew where these alleys led. He had grown up here. This particular one led to a dead end. Surely he wouldn't fail this time. He yelled out, "GUARDS, READY YOURSELVES." He was NOT going to fail this time. He dashed forward with his front paws ready to grab and hold onto any part of the thief in an effort to stop his escape. He at the same time was ready to leap into the air for an aerial chase. He hoped that the guards were also at the ready to assist him if needed, but he would NOT fail. He just wouldn't...

Soul stuttered his footsteps back exhilaratedly, slightly hesitating before he'd pounce at a vertical angle, swiftly rotating his body, grappling the rooftop at his right with his feet, as he leaped from it flying at a 45 degree angle the opposite direction, and then dove to the ground , immediately activating his ultraviolet echolocation as he skid accross the ground.

As he saw vivid indigos and violets, he bolted towards a nearby building, scanning as many allies as he could. But one he saw, since he could see through solid objects, had a somewhat deep opening on the side of its building, Soul thought he would go for that one...
_______________________
ﬥ

Sephtis saw the dragon leap to the rooftops, but he didn't follow. He walked over to the guards that were alerted, and told them to fan out through the city. He was determined to finish the mission even if it was through someone else's work. He was still angry over missing his chance twice, but he couldn't let that get in his way. He would let the guards on the outside of the city know to report any sign of flying dragons. With the guards in the city patrolling alleyways the thief would have if nothing else a much harder time hiding and escaping. He leapt up onto the rooftop and picked up the scent of the thief. He would follow this and set up more of the guards in the area where the scent ended. He decided that if he caught the thief again he would use his venomous tail, but he would only inject enough venom to induce sleep. He was determined to be successful in his first mission.

Soul dashed skidding in the open, entering the ally and hid in the opening on the side of the building. He paused for a breath.

"He was not friendly looking," thought Soul to himself, panting a bit. He waited patiently, but no one came after him, so he crept out the side of the ally, tucking his head underneath a shadow, though his body glowed luminescent white, and indigo. He analyzed every corner, and grinned cheerfully... He thought he had gotten away for good.
_______________________
ﬥ

Sephtis was still skulking around the alleyways nearby when he saw a glimmer of pure white out of the corner of his eye. He turned in the direction of the glimmer, but the light was gone. He decided to send a guard over to check, just to make sure. He waved a guard over with his wing and whispered, "Check that alleyway and make sure there's no one there." He was calmer now, but he still needed to catch the thief. He was going to patrol this area. No one had seen the thief leave this area, so he was pretty sure that he could find whoever it was. He had his poisonous tail at the ready to administer a dose of venom that would knock out a full grown EarthWing.

As Soul saw the guard he had a grin on his face, he knew he had a hiding spot this time. He immediately stepped back deeper within the ally, and tucked his body within the opening.

The guard felt quite odd taking orders from someone younger than himself, but he knew who this dragon was. Sephtis was one of the military's best recruits. He didn't know exactly what Sephtis did, but he knew he was to take orders from his division. As he was walking down the alleyway, he spotted a white light coming from behind a corner. Usually fire light glowed orange or red, what could this light be? He decided that he would go back and report this to Sephtis, but he wasn't worried about it.

(OOC: I am assuming direct control.

Sephtis waited for a while. As he was pacing the street, the guard came back from the alleyway. The guard whispered to him, "I saw a strange white glow coming from around the corner in the alley, but nothing else." Sephtis perked up. He immediately rushed over to the alleyway...

Soul activated his echolocation once more to see if the guards had noticed him, and they were in fact coming towards his direction. He considered his glow, and decided to make the least amount of trouble for himself by cooperating, he walked out of the opening and slowly walked towards the guards, nonchalantly and all smug in his face. He grinned because he had such a good time with his chaser.

He surrendered, outstretching his four wings, and his claws on two of them faced upwards. With his body propped upright, until finally his echolocation faded from use. He at least had a good idea of where they were. He confidently would approach them in peace, for what he'd say will be his negotiation.
_______________________
ﬥ

Sephtis spotted his target, and he realized that the other dragon was surrendering. He motioned for four guards nearby to get up above the target just in case the target tried to run or fly. Inside he was seething, "How could he surrender!? I was supposed to catch him!" He spoke calmly to the target, "You are under arrest for thievery. You try anything and I'll authorize the use of force."
He motioned for a final guard to get wing bindings along with bindings that would restrict but not completely disable movement.

"Relax," he said calmly with a smug grin, "I just wanted your attention," stepping foreword once. "I can catch more fish and make it up to the merchant, if you want..."

His flight or fight response was getting him anxious since he was surrounded, however. He knew if he was to be arrested, he'd surely try to escape by any means necessary, even if that meant chaos of brawl or exchange of fire.
_______________________
Soul of Sorrow and Ice
Atmosphere Drago