Name: Miirik
Alias: Seeker
Age: 17
Gender: Agender
Sexuality: Pansexual
Personality: They attempt to keep to themselves, but latch on to friends fast. They have little interest in combat, trying to keep away from it, unless it's absolutely necessary. They've never had a particular interest in magic, but can appreciate magically enhanced items. Especially shiny ones. They're quite interested in a lot of shiny things, actually. Certain shiny things- They don't hoard gold and coins uselessly, no, they're attracted to iridescent and glittering things.
Fears: Death. Losing their home. Attracting the attention of any significant dragons that could harm them.
Strengths: They really enjoy (and are rather good at) flying.
Weaknesses: They're quite flighty and avoidant. They'll try to keep away from combat, even if that could mean an innocent would get hurt. They could make a few friends, but other than that, they don't care about much of the world.

General Appearance
Height: About sixteen feet.
Scales: Black with dark blue and purple patches.
Eyes: Similar to a snake's in appearance, dark blue with a black slit down the middle.
Appearance: Slender and long, with hard scales of varying dark colors. A dark purple double helix pattern traces down their back in lighter scales. They wear a dark brown length of cloth around their neck, which likely was stolen.

Tribe Information and Status
Tribe: Loner. At one point a member of the Nightwings, but they have since left.
Inheritance: Purebreed Nightwing.
Rank: A loner.
Family: They had a family at one point, but have left them,.
Mate: N/A
Hatchlings: N/A

Skills and Abilities
Special Abilities: Those of a purebred Nightwing. (Nothing extra.)
Combat Style: Keeping to the air as much as possible, getting the job done quickly.

Background
History: A former member of the Nightwing tribe, Miirik left the tribe as soon as they could. They took little with them, some scraps and a few stolen hoard items, and took off in the night. They left the Nightwings not out of aggression, but simply out of want. They prefer to live away from others, spending their time basking in the light and hunting. They currently live on the border of the FireWing and EarthWing lands. 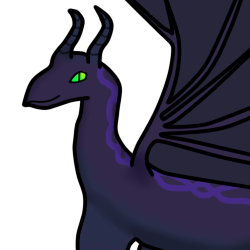 7ft is pretty small for a 17 year old NightWing. You could either make them taller to fit their age, or if you want them to be that small, make them younger.

Thanks. When I was reading some of the guides to creating a dragon, I thought it said that Nightwings were usually smaller. How large do you suggest?

Well, he's 17 years old, so maybe around 16ft? And would you like your username changed to your character's name?

Alright, thank you. And yes, I would! I wasn't really aware the username was often used as a character name. Thank you!

Okay. And I see you don't have any special abilites, so you should list in strengths that you just have the normal natural abilities of a purebred NightWing.