Personal Info
Name: Negaina
Alias: Traitor, Reaper
Age: 30
Gender: Female
Sexuality: Demisexual
Personality: Negaina is a very strict Dragon, often criticizing the bad behavior and habits of the other dragons, causing most of them to apologize, fearing that they might invoke her wrath. She is also very impatient, disliking dragons who don't answer her questions quickly enough. This, coupled with her own tragic childhood, caused many dragons to avoid her due to her social awkwardness. However, she has a great sense of justice and pride.
According to Titan, Negaina is strong, cool and a little scary but relied on by everyone, even so, she can be really girly and liked sweet things and cute animals.

Negaina describes herself as some dragon who was always crying since she wasn't able to protect those dear to her. Negaina has stated that she feels uncomfortable and insecure when she's not wearing her necklace.

Despite her reserved personality, Negaina has been known to have very little modesty and an unusual view on the concept in general.

It was shown that Negaina can't hold her liquor. While drunk, she acts very aggressive towards others, as shown by her behavior towards other dragons. She also seems to have a problem recognizing dragons when drunk.

Interests:
Patroling: She is a proud guard of the Nightwings.
Training: Honing her skills is key to her.
Eavesdropping: Negaina is always up for blackmail against others.
Dislikes:
Being Sick: She doesn't like lying down and resting. This makes her feel weak and pathetic.
Children: Negaina finds them to be weak and needy.
Lightwings: Even though she is a little bit of Lightwing, she has a bit of a grudge do to her father.
Injustice: She doesn't like unfairness.
Fears:
Lightwings: Lightwing and Nightwing don't really mix well.
Others finding out about her past: Her past is something she would rather keep to herself.
Being called Villian/Killer/Murder: She doesn't kill without a reason.

General Appearance
Height: 25% Firewing, 70% Nightwing, 5% Lightwing
Scales: Her scales are black/red (in some places) and diamond shaped, covering most of her body.
Eyes: Ruby Red
Appearance: Negaina's body is of a powerful build: Her bulking shoulders connect to her muscular arms. Each one of her arms connects to her wings. Since she has six wings she has six arms, three on each side. Her wings are black and red. On the edge of her wins is a design on oval shape wings, most dragons don't notice them. On the tip-top of each wing is a red hooked claw which also has red spikes on it. Around the claw is winged shaped red and black armor, which also has red fur like trinkets, also found on the bottom of her wings.

Her face is that of a nightmare: Her eyes are blood red. Her horns are red with the red fur trinkets attached to them. In the middle of her face, is a white disked shaped object, nobody knows what it does. Down her back is more red scales. Her tail is red and scythe-shaped. Her claws are black and like daggers. Lastly, her weapons are black/gray scythes that are connected by chains. She also has two legs.
(XD I'm typing this at one a.m. so pardon my grammar)

Skills and Abilities
Strengths:
Swiftness: Her size might be a tad bit big, but don't underestimate her for a second. After traveling the lands and not really flying, her max running speed is around 80 mph, she can keep this up for about 30 minutes. She can also dodge attacks/slow enemies.
Accuracy: Yes she does misses sometimes, don't risk your luck. This is a strength because of her weapons, being able to almost never miss is a key factor for her.
Stealth: Being a true Nightwing, her stealth is keen. When on patrol, she usually is hidden, ready to attack any unwanted guests. Being able to hide in plain sight (even for a 40 ft dragon) is pretty boss, to be honest.

Special Abilities:
Scythes of a Reaper: Her scythes are chained to her back, she has 10 scythes. She can control these weapons through magic. She can ignite them and or hide them. She'll throw the Scythes at the enemies' feet and or body. She'll use the chains of the Scythes to trip up/pin the enemies.
Weaknesses:
Lightwings: Light rebels darkness, darkness rebels light. (makes sense)
Big Dragons: 80 to the max feet can easy kill/crush this dragon.
Combat Style: Doesn't have one.

Background
History: Revealed in RP.
RP Sample: I will rp in 3rd person. But, if you really want me to but a sample that me know! 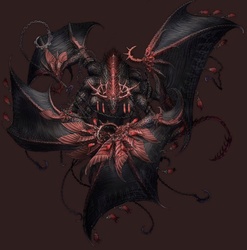 How tall is she? In that section you listed her inheritance, might want to change that!

She has 10 scythes that she can control with magic. Can she use all 10 at once? What's their range? Since she does use magic to control the scythes, she should have some weakness related to that.