Another day in the life (Private, Draken, Arkhor)

Another day in the life (Private, Draken, Arkhor)

"Scouting complete. This island poses little threat in terms of wildlife, save for if his majesty hungered for mushrooms. The climate bodes for sun today. In the surrounding areas, there are virtually no traveling threats. The nearest human settlement is over an hours flight away. I suppose this will do fine."

The sun had not yet risen on an island towards the edge of Seawing territory, yet there was one dragon already active there. Almia had received notice of a meeting to take place here, and had taken it upon herself to do he research. 5 days later, everything about the island had met with her approval. She had flown the surrounding areas, researched flora and fauna, looked in to the history of the island, and the only questionable thing for her was why this island instead of the palace? There was a secure place that was comfortable for meetings. Here was out in the open. What sort of person was the king of the Seawings meeting here?

Nonetheless, as an order it stood absolute, and she was determined to make sure everything went smoothly, so that nothing would come of Draken during this visit. She didn't know how many guards or other dragons would accompany him, if any at all, so it was all up to her. She allowed herself a sigh, and glanced towards the now rising sun. Best to get here early, so I might as well stick around. She thought to herself.

The brilliant colors of the sunset were truly a wonder to behold, its bright light washing over the land, revealing a scene of beauty. The island was a natural crescent shape, and the ring of beach boasted a striking pink hue to its sand. Further in was a dense forest of tropical trees, appearing almost nostalgic in the morning sun. The sound of waves was omnipresent on the island due to its size, and the waves themselves were topped with red and yellows, crashing in with splendor. It was a breathtaking sight. Almia supposed it might be the beauty of the island that made it the meeting place. She sighed and settled down on the beach. It would likely be a while before the meeting started. Until then, she supposed, she could enjoy the view for a while.
_______________________
Tezz : https://www.rpgdragons.org/t4295-tezz-the-fretful
Almia : https://www.rpgdragons.org/t4336-almia-the-fog-bank 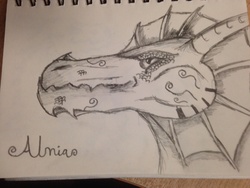 Draken knew that he had a meeting with one of his royal advisors today, more specific, it was Almia. Though out of all his royal advisors, Almia was the one who looked a bit unique out of the others, more importantly, she seemed to have more useful ideas and agree with him a bit more, as well as Draken knowing her more then the other advisors, which is REALLY saying something.

Draken got prepared as usual, but this time, he took cautionary measures before hand. He tended to overreact if something doesn't go his way when talking to only one dragon or dragoness, so he gave himself a little session, to calm him down for the rest of the day so he wouldn't go nightmare mode during the meeting, now all he hoped for was something bad to happen during the meeting.

Draken left his castle, both nervous in case an attacker would appear, but also confident about the meeting, he wanted to show that he could definitely act mature. He enjoyed swimming out of the ocean, leaving the underwater castle and heading to the specific island he had told her to meet him at and soon arrived, getting out of the water and checking the area to see if Almia was there.

To his surprise, he saw Almia on the beach that he had got onto, took a deep breath, making sure that he was in a calming mood before going up and speaking to her. Once arriving next to her, he spoke. "Well, I guess I was a bit late, I'd like to thank you for being here on time and also its great to see that you remembered the island I told you to meet at."
_______________________
Alts: Sparks, Flames, Alanare, Snowflake, Shunji, Siaga, Lunar, Paradox, Virsha

// NB - I will be playing the rogue but I will clearly indicate when. Hes going to be a seawing yet a banished one driven by hate for the leadership.  //

Today was just a normal day for Ark as he boringly laid on one of his islands which he had created, using the ocean to 'see' images of people of interest.  Mostly just watching never interfering he noticed his son Draken had gone to a remote island by himself, it was rather strange for his behaviour yet he en looked watching growing interested in what he was up too.

'Waiting... all this time for a chance to gain revenge, finally its within my claws.. the so called king.. stupid enough to go alone? A mistake which he will pay with his life' chuckling to himself as he watched from afar hidden in the waves, raising his brow towards the dragoness on the shore. In his eyes she didn't look like much to worry about, 'Surely a surprise attack will work, I will need to be fast...' he thought slowly creeping towards the shallows.
_______________________

Her eyes began to feel heavy as she watched the scenery for a while, her detailed mission of the past 5 days beginning to show its toll. She woke with a start at the sight of an incoming figure however, attempting to straighten herself out to look presentable at his approach. "Your Majesty, always an honor to see you." She gave a polite bow as she greeted him, though she found her legs asleep and wobbling as a result. Still, she admirably kept her composure nonetheless. "Oh nonsense, you are not late at all! It was I who was early, I wanted to scope out the area a little before the meeting started was all." It was an understatement to be sure, but the most effective work is that done behind the scenes, without notice.

"Now, on to more pressing matters. You wished to meet with me? I'm sure it's likely quite important, all things considered. " she inquired politely. While she did not want to rush these sort of things, getting to the subject matter was the entire point of this meeting. She had ideas but nothing concrete as to what this meeting was for. There could be any number of things that a royal adviser might be asked to hear, or people to meet. However, why was it only her here? As to why it was away from the palace, she had a slightly better idea. Walls tended to have ears, and there were some tasks that were better left unheard of. She was no stranger to these sorts of things, being quite suited to them from back in her emissary days. Being able to turn to mist had quite the benefits in terms of gathering information. Still, something in this meeting felt... off. Perhaps it was spending the past 5 days on this island, but something felt almost different now. Fatigue didn't let her place a claw on it however.
_______________________
Tezz : https://www.rpgdragons.org/t4295-tezz-the-fretful
Almia : https://www.rpgdragons.org/t4336-almia-the-fog-bank