Personal Info
Name: Infernoclaw
Alias: None so far
Age: I’d say she is about of teen age (which I believe is about 7 years according to the Wings of Fire universe, or we could say she is approximately 17 according to human age, if we are going by that.)
Gender: Female
Sexuality: Bisexual (though she doesn’t quite think about breeding all too often)
Personality: Infernoclaw is the embodiment of determination. She has a fire in her eyes that shows how badly she wants to be a great warrior in the FireWing tribe. This leads her to come off as brash and grumpy, disregarding the feelings of others that she thinks might get in her way. Having no true friends, she swears her loyalty to Queen Kenina over anyone else, even though she’s never received an official audience with her. She also tends to feel infinitely more comfortable around other FireWings than dragons from any other tribe.
Interests: Exercising to build up her strength, sparring to hone her skills, sleeping so that she may dream of obtaining glory.
Dislikes: Dragons who whine, IceWings, others who doubt her fighting prowess, reading, indirect solutions (aka “beating around the bush”)
Fears: Above anything, Infernoclaw fears disapproval. She fears the thought of being considered useless or a waste of time. Lack of friends doesn’t help much with that fear, but her prickly attitude usually makes her stay that way.

General Appearance
Height: 50 feet
Scales: Red scales. Beige underbelly. Dark orange stripe running vertically down her back, from her snout to the tip of her tail. Brown horns.
Eyes: Amber
Appearance: She has three golden rings around her left horn, and an armband encrusted with rubies on her front right leg.

Skills and Abilities
Strengths: She’s very well versed in one-on-one combat. Years of training have raised her to be swift and firm when it comes to killing her enemy. Her reflexes are quite fast.
Special Abilities: No special abilities.
Weaknesses: While in an early fight she is strong and calculating, she tends to get frustrated quite easily. The angrier she gets (and the longer it takes her to kill her target) the more mistakes she starts making. She also doesn’t read very well and doesn't like puzzles of any kind.
Combat Style: She has no named combat style, but brute force is usually what she winds up turning to.

Dad, tell me the story about mom again, Infernoclaw thought to herself as she stared at her father, slumbering next to her in their cave with his large wing drooped around the small dragonet. That was usually all she had to ask him, and he’d go on for hours about her mother’s great adventures. The battles she’d won, and the battles she’d gracefully lost. When they used to spar together, and when they had fallen in love.

Though her father had a tendency to ramble on, Inferno immensely enjoyed hearing about her mother. They’d never known each other personally, but by the sounds of it Inferno liked to believe that they would have gotten along quite well. That, if nothing else, her mother would be proud to hear that the dragonet aspired to be just like her. Every bit as fierce, every bit as deadly, and every bit as reputable.

Yet, she couldn’t bring herself to do it. The words formed a ball in her throat, and she turned her head away in frustration. She felt weak. Spineless. If she were more like how she imagined her mother, then perhaps she would have had the courage to ask.

Inferno slipped out from under her father’s wing, careful not to disturb his slumber. She walked toward the cave wall opposite him and eyed the set of armor that was given to FireWing soldiers. It was set neatly off to the side, and hadn’t been moved since Inferno was still an egg.

She ran a claw over the armor, taking note of the intricate design. A frown was set upon her face.

This was the armor that her mother had worn, according to her father’s stories. It was what she wore when they’d met, and it was the armor that she died in. A large hole in the headpiece spoke of a gruesome fate that befell Passionfire during her last battle. This and various other battle damage rendered the whole set useless, and thus, it became more of a keepsake than anything you’d want to wear into battle.

One day, Inferno thought, one day, I’ll become a Sentinel. Queen Kenina will recognize that my mother’s fighting spirit carries on through me, and she’ll send me off to do great things. I’ll prove it, or die trying.

Inferno’s heart skipped a beat as her father’s voice startled her. She turned around quickly and faced him as his head was raised and he was staring at her. He looked dumbfounded for a moment, his eyes looking over her form as if making sure she wasn’t harmed. A warm smile tugged on the older dragon’s lips.

“You looking at your mother’s armor again?”

Inferno paused briefly before nodding her head. “Yeah...I just wanted to see it is all.”

“That’s well and good, but you need to get some rest. Even little soldiers have to sleep.”

Inferno visibly pouted. She looked down in disappointment, her eyes shifting from left to right before refocusing on her father. Taking a deep breath, she spoke.

“Dad, can you tell me the story about mom again?”

Dirgeflame yawned before straightening his two front legs into a sitting position. “Come now, fighter, didn’t I already tell you the story five times over the past week?”

“Can I hear it again?” Inferno sat down, wrapping her tail around her front talons.

“Alright, alright,” Dirge said with a light chuckle. “But you have to promise you’ll go to sleep afterwards, deal?”

“Deal.” Inferno’s face visibly brightened. Her muscles tensed as she restrained herself from bounding over to her father. If she were to do great things, she would need to stop acting like a dragonet, and start acting like a full-grown dragon.

“Alright,” Inferno’s father stood then settled himself closely in front of his daughter. “Our story begins with Passionfire, the most fierce—and might I add beautiful—dragon in all of Pyrrhia…” 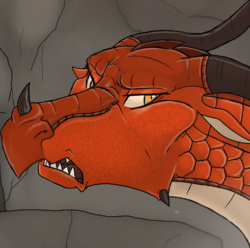 Looks good except for one thing. Her personality is 4 sentences while we require 5. Please fix this and bump.
_______________________
Aero Dynamic|Dynamic Oreo|Wolf|Evaleen|Kaora|Rye|Atmosphere|Kayin|Khusavir|Thermo

Aero Dynamic wrote:Looks good except for one thing. Her personality is 4 sentences while we require 5. Please fix this and bump.

I must've counted about 4 or 5 times before I realized it was only 4 sentences xD my bad. This has been corrected.