(OOC: Future dated to at most 5 years older than she currently is. Prasi is currently 15 years old, so in this thread she's 20 (also please understand that Prasi is seeing things, this creature is not really there) all earlier threads will be finished before she poofs for good.)

She had nothing with her as the dark dragon female strode confidently through the night darkened forest. She was at home in both forests and shadows, for Prasi was of both worlds. She was a better hunter than even her mother Rii, gaining that natural talent from her mother and her stealth skills from her fathers nightwing blood. Strapped to her body were bags that held every piece of prey she had caught during her night time hunt earlier that evening. Three deer, one bison, two moa birds, and a cave lion were among the creatures she had caught so far. Right now Prasi was stalking a strange creature.

It had appeared when the trees began to sway and crack in the harsh wind. Prasi wasn't sure why it was so windy when the skies were clear and full of stars, but despite there being alack of storms around the wind was tearing through the landscape. Leaves flew everywhere, and the sound masked Prasi's heavy foot steps as she bound through the forest. It was while she was racing the wind, having leaves blow everywhere around her face disorienting her that Prasi spotted the strange beast. With flickering reflective scales the long creature without wings blended easily into the environment. At first glance Prasi had thought it was a dragon that had no wings, but now she wondered if it was a snake or even maybe a spirit like her aunt Mairii. It's awesome camouflage made it hard for Prasi to figure out what the thing was. She could only barely see the outlines of it as it moved through the undergrowth silently, and so Prasi chased this thing far into the forest until she became lost. 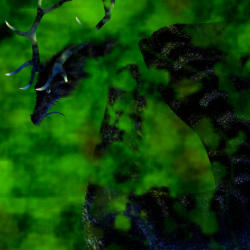