Personal Info
Name: Delphyna
Alias: Coldest Wave
Age: 18
Gender: Female
Sexuality: Heterosexual
Personality: Delphyna is one of the coldest dragons in SeaWings, and she often operates pretty much on a loner basis. However, even though she's the type to leave without sparing a single glance at another dragon if they tried to talk to her, she will fight a dragon if they annoy her (which isn't really a hard thing to do). She is exactly the type of dragon that most would prefer not to be around, and she likes it that way. Most of her personality stems from bitterness from being born and not even wanted. She doesn't feel like she belongs anywhere, and so she loves to isolate herself. However, if someone tried being nice to her, she will be cordial, and ridiculously formal. She is comfortable with almost no one (or maybe, she just hasn't met someone worth letting her guard down with). She is also generally very patient and cruel, and would do anything to get her way. She's almost selfish, and usually thinks of herself way before others. Although it seems like a horrible trait, it's a great one to her, as she regards it as self-preservation. She's also one of the longest trainees as she doesn't know what she wants. Although she has her strengths, she chooses not to commit herself to a single rank, partly because she doesn't like commitment or being part of something, and partly because she doesn't feel much of a connection to her tribe, which gives her little to no urgency to commit to a rank.
Interests:
1. Fire Dragons -- She loves how fiery they are and how they carry themselves. If given the choice, delphyna would definitely join them.
2. Swimming -- As much as she doesn't like being in SeaWings, she loves the feeling of swimming, of being free. It probably has something to do with her name too, being named after one of the most graceful animals in the world.
3. Fighting -- Although she wouldn't pick a fight with someone else, she would also never pass up a chance for a fight, if someone approached her with one. She likes the thrill, the blood shed, and the feeling of violence.
Dislikes:
1. Emotions -- It hinders progress, life, and fights. She dislikes it for the simple fact that she sees it as something that is more harm than good, and thus, also refrains from feeling anything. She is amazing at feeling numb.
2. Physical Contact -- Something about touching makes her feel trapped, and if another dragon can touch her, they are too close for comfort.
3. Noise -- Which to her, depending on her mood, can vary. She can feel annoyed with a small voice asking a question, or sometimes she'll only get annoyed when others start talking really loudly, or over each other.
Fears: She's afraid of seaweed, which makes it really hard for her to go deep into the sea. She thinks seaweed will trap her, which leads us to her next fear - being trapped. This generally has to do with freedom and control, both things she needs.

General Appearance
Height: 30 Feet
Scales: Her scales are generally a purplish-blue, only her wings being the most blue part of her whole body. Her scales are shiny and glistens in any light, generally giving off an intimidating vibe. Although her scales make her look sharp and untouchable, she's almost soft when other dragons touch her (although no one would know that as she generally fights anyone who touches her).
Eyes: Black
Appearance: Delphyna is an average size, and yet, she comes off as very intimidating as her wings are usually spread out in attempts to deter others from coming near her. She has strong legs to paddle through water, and smooth scales that help her swim faster through the water. She's generally always moving around, as she doesn't like to stay in one spot, in fear of other dragons coming up to her. She generally does not don any accessories, since they are not only unnecessary, but also constricting and annoying.

Tribe Information and Status
Tribe: SeaWing
Inheritance: Purebred
Rank: Trainee
Family: Both of her parents died when she was an egg, so she has never met them.
Mate: N/A
Hatchlings: N/A

Skills and Abilities
Strengths: She's a very determined person, and this pushes her physical limits to a new high. Even though her power isn't very high, she can dodge quickly in water, and is able to fight for a long time. Due to her aloof nature, one of her mental strengths is her ability to detach herself from feelings, and so she can hurt without feeling remorse, which makes her very cold-blooded in her attacks.
Special Abilities: If she cares enough to channel her energy and power, she can use a jet of water to seal up a wound. (However, she has never used this power, for obvious reasons.) This ability is highly subjective, and are usually affected by several factors. It can seal the wound up in about 8 seconds, and it can be done mid-fight. However, her limits are that she cannot seal up anything longer than 3 feet. She can heal up to 3 big 2-3feet wounds (or 5 small <1feet ones) before she's completely exhausted (completely unable to fight).
Weaknesses: Her weakness is aerial attacks, and basically anything with high speed. Being great in water also means she's not amazing in air, and her speed also decreases on land or in air, as compared to water.
Combat Style: Delphyna likes to catch her opponents off guard, either literally or by faking her attacks. She likes to rile her opponents up and tire them out by making them attack a lot, since her strength is her stamina. Usually, she doesn't fight others voluntarily, so this combat style works out -- she usually fights those who are itching to kill or draw blood.

Background
History: When Delphyna was born, she was told that her parents were dead. However, the reason wasn't revealed to her, and she was raised by her caretakers, who were also the caretakers of many other abandoned dragons. As a result, she never really got any attention, which led to her self-isolation and dislike for affection and touch. Ever since she was allowed to, she has always swam and went through the seas on her own, and fought off anyone that dared go near her. Over the years, her independence built her intimidation, and till this day, no one has been able to break through the icy shell of hers. Although she has a soft spot for other abandoned or orphaned dragons, she places herself over the needs or wants of others, and prioritises her own needs. She is horribly selfish and self-centered, and believes that if she had survived with no one by her side since young (her caretakers do not count to her), then she can survive well herself for the rest of her life.
RP Sample: Sometimes when Delphyna glided through the waters as if she was one with the current, she wondered how it would feel to be able to fly like this too. The water was cool against her scales and she loved it, as she dived as deep as her body would allow her to go. Here, no one would be around to disturb her, just the way she liked it. Perhaps, if she was lucky, some prey may be in the area too. Her eyes darted around as she quickly noted the areas with a lot of seaweed, and settled on some rocks. In this darkness, hardly anyone can see anything around. She folded her wings against herself carefully, before a small brush against her side caught her attention. Whipping her head around, her scales and eyes flashed dangerously. The small dragon by her side seemed harmless, but she wasn't taking any chances. Glaring hard at the little dragon (probably a hatchling, in that size), she bit out her words. "What do you want? This is dangerous waters, you know. For dangerous dragons." 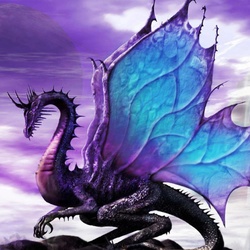 Hello there! I'm Aero Dynamic, a forum moderator here, and I will be grading your app today!

Could you explain her ability a bit more? Even if she never used it or will use it what all can it heal? How quickly? How often can she use it?

Before I approve this, I need you to specify how long or quickly it takes for your character to seal up a wound. I don't recommend any beyond five seconds for balance's sake.

i don't think anyone has seen this so bump again!