Insert Image Here
(To be inserted)
Personal Info
Name: (Your dragon's name)
Aurora Stallion
Alias: (Your dragon have an alias that they sometimes go by? An alias is something that also either named after what they are good at, or an adjective or descriptive phrase expressing a quality characteristic of the person or thing mentioned. Also known as an epithet)
Auro
Age: (How old is your dragon.)
About 322
Gender: (Male or Female)
Female
Sexuality: (Heterosexual, homosexual, pansexual, ect.)
Straight
Personality: (What is your dragon's personality? Please make it detailed, and longer than 5 sentences. If it's not detailed, it will NOT be accepted)
Auro is more or less relaxed. Though she lives close to humans, she somehow manages a carefree attitude. Could it be that she doesn't fear for her mortality? Most likely. She'd let go of her constantly worried demeanor after her mate had died, leaving her kinless. Since then, she feels she hasn't much to live for except to feel the wind on her wings. I guess one could say another attribute be that she's.. positively hopeless.
Interests: (What does your dragon like or like to do? 3 minimum)
Fly. Fly Fly fly. If Auro isn't in the air she's in her mountain side den staring across the horizon, the sky always amazed her. She also enjoys exploring. She dreams of flying across all the world, alas it doesn't seem realistic. Lastly, a guilty pleasure of hers is lucid dreaming her mate. If she can't have him in the real world, she'll make do with just her dreams. Strangely enough she also likes foods (mostly fruit) she hasn't had before.
Dislikes: (What does your dragon dislike or dislike to do? 3 minimum)
Aurora detests being trapped. Whether within her mind or physically by whatever means. She's also not fond of those who are similar to her. She likes to think she's unique and those who oppose that are a threat to her. Lastly, she detest those who think too highly of themselves. She finds it childish and annoying.
Fears: (What does your character fear? All dragons have at least one fear, and nobody should put None or N/A. It can be a phobia or whatever.
Being easily replaceable. She fears that she isn't enough for those she cares about, the few that there are, and that if they find someone similar and better, she'll fade out of the hearts of those she cares about.

General Appearance
Height: (How tall your dragon is)
Length wise, Aurora is about 23 feet long.
Scales: (What color and how is it designed)
Aurora is mainly a deep red. Her hind legs, tail tip, the tips of her wing appendages are black, and ombre into the red. Her body is sleek, meant to cut through the air soundlessly, stealthily, and quickly.
Eyes: (Eye color)
Her eyes are a fiery orange. All four of them.
Appearance: (Your character's general appearance. Weapons and other accessories must be included)
She has simple horns on her head. Two that come up at a 270 degree angle for a few inches, then fall back into a gentle arc. She then had four that come off the back of her jaw. They vary in size, smallest being on top, third largest below that, largest, then second smallest.( I think. I'll have to check my reference afterward.) Auro does not have anything to cover her hide. Strangely enough, her soft skin doesn't bare any scars, as easy as it would be to come across one.
Tribe Information and Status
Tribe: (Which one of the 7 dragon tribes does your dragon belong to)
None, Aurora is a rouge.
Inheritance: (Are you a pure breed of your tribe, or crossed? If so, what's the cross?)
Aurora seems to fit into some weird mix breed of a few dragons of this land. Her size is closest to that of the Lightwings, but even by their standards she's small. Her colour resembles that of a Firewing, and she has the venomous spit of an Earthwing.
(EW 25%,FW5%, LW70%)
Rank: (What rank is your dragon)
Rouge
Family: (Does your dragon have a family? Who are they?)
Aurora does not know of any family. For all she knows, she just.. appeared.
Mate: (Your dragon's mate. You may put N/A if you do not have one)
No, she still silently mourns the late Korosu.
Hatchlings: (Does your dragon have any children? Put N/A if you do not)
N/A
Skills and Abilities
Strengths: (What is your dragon good at? Both physical and mental strengths must be included)
Aurora is an excellent flyer. Nearly undetectable, she's probably spent more time in the air than on the ground. Another notable feature would that she knows how to swim, giving her all three terrain types to discover, to a degree. Aurora's biggest strength though, would probably be her determination. She rarely gives up on something she cares about.
Special Abilities: (Any unique abilities that your dragon has that no other dragon has? Make balanced powers)
Strangely enough, though she has no ties with them, Aurora posses the acid breath similar to that of an Earthwing. The acid is comprised of extremely strong stomach bile kept in a pouch in her throat. She has the power to project it as if it were spit. it wouldn't do much if it landed on a dragon in moderate amounts it might sting a bit. However if the shot is to land in the eyes it has to temporarilypotential to blind. She can fling it about 70ft, but to actually get it that far would use it all, there's not a whole not of it, the pocket's small. It builds back up in full after maybe an hour or two. A draw back to the pouch, though, is that if she coughs or sneezes she runs the risk of getting it in her mouth, which leaves an awful taste for a while :/
Weaknesses: (What is your dragon's weaknesses? All dragons should have one, if not more. No dragon should be super powerful like that)
Aurora's greatest adversary would have to be her durability. She knows her limits, but someone who doesn't could very easily tear her apart. If it come to a battle with another dragon, she would have to solely depend on her fleeing tactics.
Combat Style: (How does your dragon fight? Does he/she have a specific style of fighting?)
Auro would best use her agility and elusiveness to win a fight. Crashing down on an opponent from above, or coming quickly from across, racking them with her hind legs talons. Otherwise, she doesn't fight much, it's more or less an assured loss. She'd quicker flee than fight.

Background
History: (What is your dragon's backstory? Optional)
Auro does not know where she comes from, or where she's going.
RP Sample: (Provide a RP sample of how you would roleplay.)
Auro felt the muscles in her arms stretch as wide as they could. She took a glance over at her wing, just marveling at it while it opened as wide as it could. Auro couldn't help but let a screech of happiness flow out of her. She flapped twice, then folded her wings in to twirl her body a full 360 degrees. She opened her wings again, taking in a large breath of fresh, chilled air. In the clouds she grew bored of the gray surrounding her. She let her head lead the rest of her body into a nose dive directly below her, folding in her wings yet again. The sea churned below her, as if beckoning her. Aurora closed her main set of eyes, as the secondary set was already closed. As she felt the chill in the air grow thicker she knew she was coming closer to the waters surface. She took the salted air, and let the ocean swallow her hole. She opened her primary set of eyes again. She had to admit it stung, but it was a small price to pay for the new view. The vast waters were marvelous. She opened her wings yet again, as wide as they could. She pulled her head up, the down again, moving like some sort of otter, assisted by the flapping of her wings in the blue she moved with about half the speed she did in the air. The chill of the waters now seeping into her bones Auro pulled out of the ocean. She had realized at that moment she had made a mistake. She was going to be freezing the whole flight home. 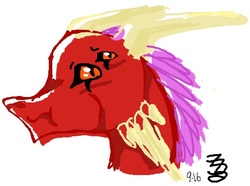 Hi there, I'm Aero Dynamic and I will be grading your app today!

First of all, would you like your username changed to your dragons name or nickname? Also, you can delete the ( ) and the words within them if you'd like.

Could you explain a bit for about your poison? What it does for how long and how often you can use it?

Hello Dynamic.~
I'd love to have my username changed to Auro, if you could.
I don't mind the parentheses all that much.
As for the acid spit, it's essentially extremely strong stomach bile kept in a pouch in her throat. She has the power to project it as if it were spit. She can fling it about 70ft, but to actually get it that far would use it all, there's not a whole not of it, the pocket's small. It builds back up in full after maybe an hour or two. A draw back to the pouch, though, is that if she caughs or sneezes she runs the risk of getting it in her mouth, which leaves an aweful taste for a while :/
Eh.. not sure what a bump is @w@ I'll look around to see if I can figure it out.
_______________________

Bumping is simply saying 'bump' or anything in a new post, sort of like what you did ^^

And if you could just put that information into your app, that would be perfect~
_______________________
Aero Dynamic|Dynamic Oreo|Wolf|Evaleen|Kaora|Rye|Atmosphere|Kayin|Khusavir|Thermo

Oh right, one last thing, what can it do when it hits another dragon and for how long?