It was already midnight and still she was the only one here.

Just outside the borders of each territory, Frost was hovering above the ground, floating in gentle circles and spirals as she continued to wait. She had given them a specified time on when they had to meet and so far they were late.

"How difficult is it to show up on time?" she muttered frustratedly. "By this rate it will be too late to do anything." Suddenly the smell of the ocean mixed with the smell of smoke caught her attention, letting her breathe a sigh of relief. "It's about time you both showed up! If you have forgotten we have very little time to discuss the situation."

Within seconds two dragons appeared above her, one smaller than her landing with a bit of ease and the other larger than both of them, trying to land only to stumble and fall once his feet touched the ground.
_______________________

Late already. He knew that, and he knew she wouldn't let him hear the end of it when he showed up. He could already hear her voice once he was close to their little meeting spot, not something he agreed to, but with this cold-hearted female he barely had a say in the matter.

Once his feet touched the ground he nearly fell over, casting a glare at the larger dragon that had also become part of this strange alliance. "It would be useful to us to know what the discussion is about instead of just throwing it in our faces with no useful information."

Drocko took the time to lean against a few trees that stood close to them, feeling the pain start to return to his leg as he began to open his travel kit. He would rather be sleeping now instead of meeting with two other dragons he hardly knew. 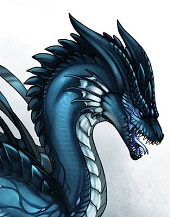 At first, Vokda had been very hesitant to show up for this nightly meeting, having thought it over many times before making a final decision. Unfortunately, the female IceWing was very convincing, causing him to make a decision to show up and hear what she had to say.

Why she asked him in general he would never know.

However, his hesitation made him a bit late although the sight of a SeaWing showing up before him made Vokda relax. At least he wasn't the only one to show up. Hearing the female's upset voice caused the FireWing to grin which immediately disappeared as he tried to land.

With his huge size it made it difficult for him to judge how close to the ground he was, ultimately causing him to stumble and fall, the ground trembling from his fall. It wasn't the greatest impression to make, but that wasn't important right now.