Top posting users this month
Who is online?
In total there are 8 users online :: 2 Registered, 0 Hidden and 6 Guests :: 1 Bot 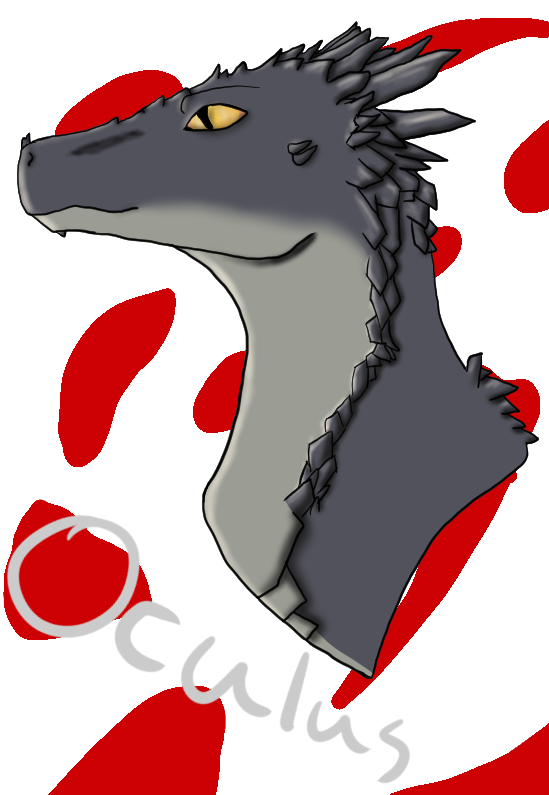 Personal Info
Name: Oculus
Alias: Occy, Ocu, Omega
Age: 27
Gender: Male
Sexuality: Heterosexual
Personality: Oculus carries an air of superiority over others.  He is confident in his abilities to handle any fight, and demands respect.  He will be, however, completely loyal to those in his charge and does his best to protect them.  Oculus likes to beat down arrogant drakes and intimidate them if they threaten or try to act superior over him.  Even though he keeps a high posture, trying to look tough, he has a soft spot for the hatchlings and young, letting them do as they please and even enjoys their company.  Oculus is very calculated, figuring out possibilities of actions that have not been committed, and weighs the gain vs the lose.  He is also honourable, and tends to be gentleman like with dragoness's.  Despite his strength on the battlefield, he is terrible in social settings, and speeches are his bane.
Interests: Oculus enjoys preening his scales, wanting to maintain a clean and sharp appearances.  He also likes to simply observe others from a higher area, laying down.  He also enjoys talking with others, as long as they do nothing to try and be superior.  The defense of his tribe, and challenging battles are also something he enjoys.
Dislikes: He dislikes being dirty, but can stand it if necessary, but will almost certainly clean himself afterwards.  Pompous drakes are a no no to him, and he feels the need to put them in their place.  Attending meetings with useless discussions bore him, and he wishes that he was not forced to attend them at times.
Fears: Destruction of his tribe, death of his loved ones and hatchlings.

General Appearance
Height: 80 feet (24.4 meters)
Scales: He has gray scales, much darker on his back than his stomach (countershading).  His scales also are thicker along his chest and back as they are meant to protect him in fights.
Eyes:  NORMAL:  Yellow
Activated: Appearance: He is a tall drake with dark gray scales, with lots of horn like appendages along his back, neck and head.  There are strange markings that not even he can read, and they light up when his ability is activated. 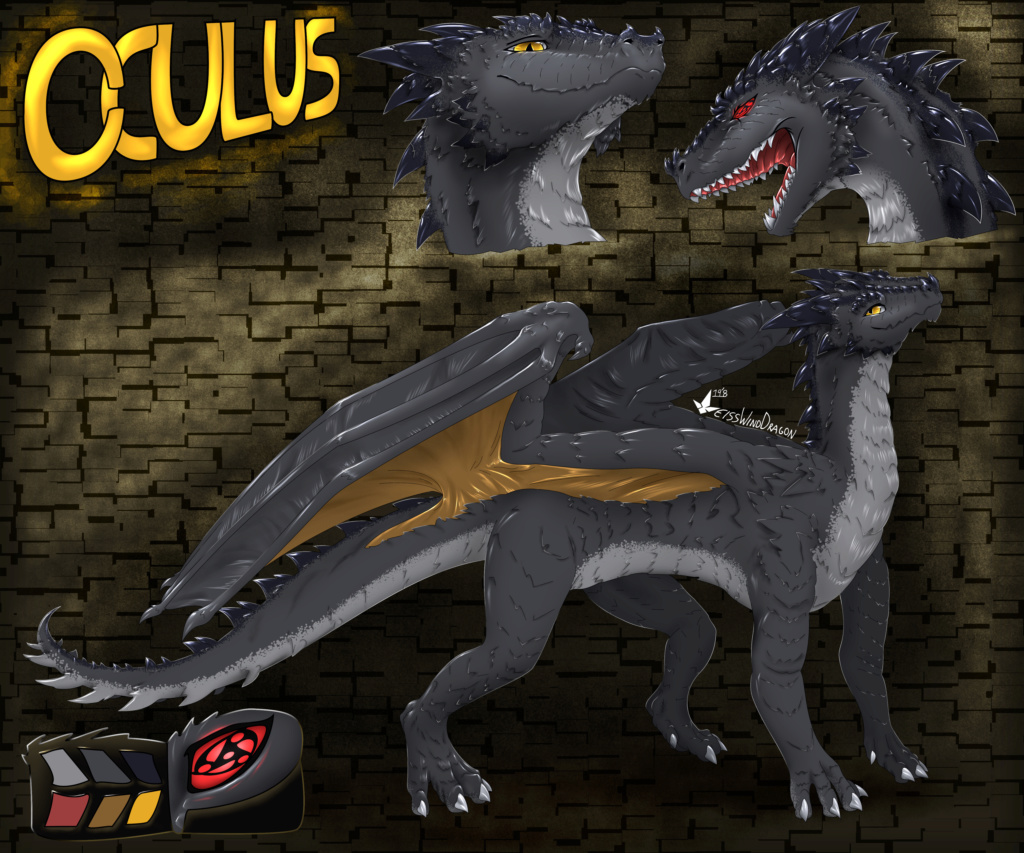 Skills and Abilities
Strengths:
Activated Eyes:
His eyes are exceptional in judging opponents reactions from muscle twitches from his activated eyes.   If looking in his eyes when they are activated (see above), he can trap those in his gaze into an illusion, forcing them to hear, smell, feel, and see what he wants them to see and feel.  This can be overcome if the one caught realizes they are caught, and calms themselves to break it.  This requires eye contact.
Reflexes:  From years of training from a trainee, he excels in claw to claw combat, and is very nimble on his feet.
General stuff:  Max flight speed of 50 mph (80kmph)
Shadows:  Special ability
Special Abilities:
Shadow Lord:  His power is that of legends, an icon of the NightWings.  He can control shadows, forming spears, domes, spikes, and all sorts of different contraptions and shapes from shadows.  The shadows, however, cannot be 'tossed' per say, as they always have to be connected to the ground.  Shadows have a range of 800' feet from the center-point of Oculus.  The makeup of the shadows makes them difficult to break.  Physical strikes from a strong Earthing could begin to break them after 4-5 solid strikes against them.  By sharpening the edges, it is also good to deflect ranged attacks.  The shadows are also weak to strong intense light-based attacks, as they begin to dissolve in intensified light beam type attacks or highly concentrated fire.  They do not dissipate in sunlight.
Weaknesses:
Bright lights: Due to his highly acute eyesight, bright lights hurt his eyes.
Honour-bound: Oculus was raised to follow his words and be honourable.  This can be taken advantage of by dishonourable opponents.
Flirty females:Due to his lack of social skills, he has a hard time and usually breaks down when being flirted with by a pretty dragoness.  And due to his honour, he feels like he must be gentleman like, and his social skills are sub-par at best.
Aerial Combat:  As his powers require a shadow to be present before use, aerial combat makes it almost impossible to use that ability, and he is also not the fastest in the air.
Combat Style: Oculus prefers to use his shadows to attack his opponent from far distances, keeping himself clean from the fray. He prefers trapping them and finishing them off with his shadows, keeping himself presentable after a battle.  If they do get close, he will not hesitate to engage in claw to claw combat, using his eyes to help with his reflexes and shadows to assault on top of his claws. Against aerial foes, he will just hassle them and try to drag them down, otherwise, Oculus would shield himself and wait.

Background
History: Raised on the borders of NightWing territory, Oculus grew to enjoy the outdoors.  Due to the loving and caring nature of his parents, they raised him to be strong. They both trained him, his mother how to use his special eyes' properly, and his father how to be honorable and respect others, along with close combat.  He had a nice life growing up on the outskirts of the NightWing's territory, and grew up there.  It was only when he was around 14 that the NightWing army came around and harassed his parents.  Being the honorable drake he was, he challenged their captain to a fight.  That battle is what changed the course of his life.  After quite embarrassingly mopping the captain up, he was drafted into the military.  He quickly rose rank, and when the opportunity arose, he became the lieutenant of the NightWings.  However, he did not hold that position for long, as Gemini quickly retired and he came upon the five advisory system.  Here, it was what marked the beginning of his rule.  The NightWing civil war that was brewing was halted and dismantled before it could really get going, the trouble makers kept into place, and peace finally coming to the NightWings.  This new peace time did not work with the other tribes, as the still mocked the NightWings.  Oculus worked hard to improve the military system of the NightWings, quickly learning that brute strength would not win battles, and worked on training the NightWings to be strong, agile, precise and lethal warriors.  He also began his assassin's creed, his personal army who wrought terror upon those that tried to incite anarchy, and taking the surrounding rogue territory to further increase the security of the NightWings, as well as let the other tribes the NightWings were no longer the laughing stock of Pyrria.  From his skill and determination, he had risen to the ranks of the Demigods, while also leading the NightWings to a greater future.

Having disappeared for a period of time, his empire has fallen and fractured.  Most believed him to be dead, none are prepared for his return.
RP Sample: Nah

Re: Oculus: Lord of Shadows

Re: Oculus: Lord of Shadows

Forgot a weakness: Occy is vain.

Declined because your future father-in-law was not mentioned in family. ;-;