Orion woke with a start. It had been three nights now that he had awoken in the night. His young mind was too stressed with the deep set sentiment he had for his beloved rock. Oh, he only cold feel it's porous surface on his scales now. The soft wind, the heat of the sun beating down on him and radiating from the sun soaked stone.His eyes snapped again, having just started drifting from consciousness. He knew Devi was away on a trip for a short while with Aakesh, and the strange dragons watching the house he was in were told to keep him safe, but he knew a way out, and his young mind thought deviously of the perfect way to spend his morning.

Orion stood, wincing only slightly from the grogginess, he walked clumsily over to a balcony situated in an adjacent hallway to the large room where he stayed. He was suddenly stricken with fear. It had been a week, maybe more, since he had taken a fall from the heavens. The only way down was crawling slowly down, and the drop, if he were to slip, was much too far to land without his left wing's assistance. But, nonetheless, he continued to step up quietly over the balcony and down over the edge.

His decent was luckily uneventful, and he looked around at the comforting darkness of the surrounding trees in the distance. Walking, then quickly speeding ahead into a sprint, Orion bolted towards the now pink and blue sky that was soon to be the birthplace of the new day's sun. I should get there just as the sun has started soaking my rock! Orion thought, pushing ahead in his travel.

By the time the sun started peaking above the horizon, Orion had found himself in a predicament. His sore feet and tired body came to rest merely yards away from... well, a beach. Now, unfortunately, Orion had no idea where he was, and the beach meant he was stuck. Maybe he could find help? A dragon to carry him across the water? He refused to believe flying was an option, pushing it from his mind. But, in time, Orion began to panic. How was he going to find his rock? How was he going to get home? As he looked up and down the beach frantically, he tripped on a stick that had been lodged deep in the sand. He stood, sand stinging at his eyes and drying his mouth. He stood and stumbled over to the ocean water ahead, not aware that it was not the same as the water back at the lake that rested not a days walk from his rock. As he approached, he lay down and started splashing his face in the water, but as soon as he took in a gulp of the salty water, he coughed and sputtered, choking on the liquid that defied him and caused his insides to twist.

Orion stumbled back and cough harshly, trying to expel the terrible thing he tried to drink. His eyes were now flushed with tears from the sand and salty water, and his throat was dry from the experience. Laying down, sobs wracking his body, Orion started wishing he had stayed awake when he got here, so he could remember where his rock was. Now, though, he was in the middle of nowhere, on a demonic beach of salt, and without a clue of how to get to where he was going.

Tezz froze as Orion mentioned his father. His thoughts froze as he thought of his own father, and what he might do if he misbehaved... "Y-Your dad?! I-It's OK! He doesn't have to find you here! We can find you a rock, and you can stay here with me and I w-won't let him hurt you!" He spoke out, fear lurking behind the forcefulness in his voice. "B-But for now you need to eat and drink! You were really weak when I found you..."
_______________________
Tezz : https://www.rpgdragons.org/t4295-tezz-the-fretful
Almia : https://www.rpgdragons.org/t4336-almia-the-fog-bank 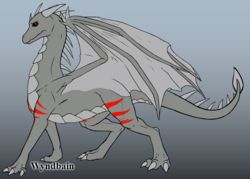 Tezz watched with amazement as the Orion's scales changed hue. He had never seen a dragon do that before! Then again, there was a lot he didn't exactly know. This whole situation was weird. Orion didn't look that old, so something awful must have happened for him to be on his own like this. "You can call me Tezz." he hesitantly responded. After giving him some time to eat, he decided that it was time to answer some questions.

"So uh, whatcha doing out here? You seemed pretty hurt back there. And there was this other dragon with you before, but they seemed to have left. ...are you OK?" The questions flew out almost all at once, and he began to mentally berate himself.Danggit Tezz, not so many questions at once! You aren't going to get a proper response if you ask everything at once... he thought with a grimace. Still, they were questions that needed answering. If he was running away from his dad, then I can't just leave him here!
_______________________
Tezz : https://www.rpgdragons.org/t4295-tezz-the-fretful
Almia : https://www.rpgdragons.org/t4336-almia-the-fog-bank