Latest topics
» Ice and Fire [Xajiva]
by Xajiva Yesterday at 8:44 am

The buzzing was returning. If it was actually a buzz or just a figment of her imagination she wouldn't know, but it was coming back. It took a while for her to realize that it was gone, but eventually it went away. As if something you had was missing and you didn't realize it until you looked. That was what happened to her. While the buzzing wasn't there she was off 'experimenting,' wondering when she'd get caught and stopped. Apparently that was why, she had nobody to stop her. After she found out that it turned off, she began to do a bit more, testing the limits until someone came up to stop her again. Seems like that time was now, she must have pushed the boundaries.

Now it was time for the hunt. One thing she's learned was that the buzzing got stronger when she got closer to them and weaker when she was farther from them. It was like a more intense game of hot and cold, stronger being hot and weaker being cold. But it only worked if you were looking for them- or if they were looking for you. But she doubted her opponent would realize it, for it took a while for her to discover the buzzing. It was great when you wanted to find the other dragon, but terrible when you knew they were coming for you. Kayin could easily call it a blessing and a curse.

Her travel took her to the SkyWing territory, a place she was going to visit sometime after her IceWing visit. Apparently she'd have to schedule that for later. Sadly, she couldn't just barge into the castle asking for one of the dragons there, she'd have to wait to be escorted. Kayin already had her thoughts. She knew that their Semi had recently gotten her powers, but it wasn't unheard of one turning into a Full God. It was actually kind of sad, seeing as they thought they were once mortal then that they had to serve their tribe as a god only to be told they had to leave and act like the god they were supposed to be. Not to mention any mortal relationships they had would most likely crumble. It was a slightly satisfying thought, especially if her other was the Semi. With her orbs being able to watch over all of the tribes, she had noticed how attached the Semi and the King had seemed to be. It would be lovely to ruin her relationships, and with the fact about how naive she was when she had her Semi powers, or Full God tease as Kayin would call it, the goddess could easily play around with her, toy with her mind and make her weak, show her the future even if it wasn't going to be the one that was true. She chuckled at the thoughts of what she could show her.

Today was going to be an interesting day.

Something that Anila was always short on.

Folding her wings elegantly to rest against the side of her hide, she licked up the last of the food that she had to eat. It wasn't desirable, but Anila had been slowly eating more as Tion had given her the things to eat. But, the reason being was quite simple, and the results were already showing. Instead of being a gaunt, skin and bone dragoness, Anila was slim, her body sleek with no more protrusions from her bones. With time, Anila and Tion had remade what the public viewed Anila as, no longer that uncontrollable tyrant which tried to murder the king.

But alas, time still escaped her as she opened the door to leave, as her mate had done so hours beforehand. Her claws gently clicked across the marble walkways as she approached the entrance to the palace. It was extremely rare but for once, Anila was allowed to actually leave the ground and the island for an hour or two-without having guards escorting her. Excitement was visible on her face as she trotted to the entrance, pushing it open...

Who on earth was that?

Anila frowned at the cream coloured dragon, her feathered wings were held with just as much elegance as Anila held hers. The semi-goddess couldn't hide a feeling of fear as she felt pure power coming from this dragon, something which she couldn't even comprehend. She tried to get rid of the feeling, concentrating on different thoughts to distract the power that she could feel from this dragon.

But for reasons Anila couldn't comprehend, she almost felt drawn to them, as if her powers were reaching out to grasp at their paws. Shaking the feeling off, she bravely walked up to the dragon with a smile on her face. "I haven't seen you around in these parts before, may I have the honour of knowing your name? As I am Anila, Semi-Goddess of the SkyWings." Anila claimed, before offering the larger dragon a graceful bow.
_______________________
Anila, Goddess of the Elements 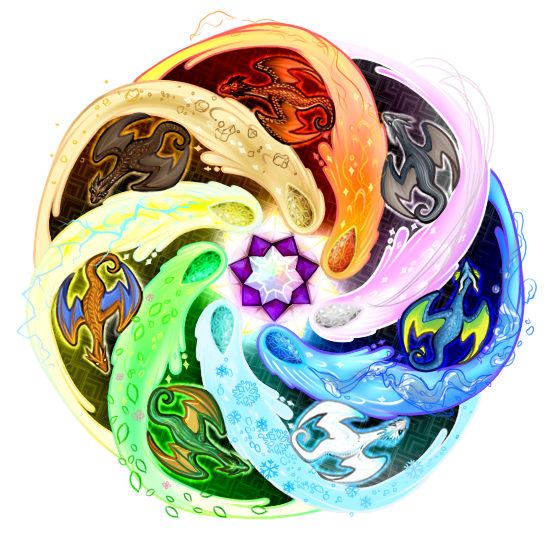 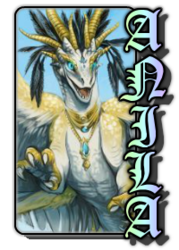 It was almost a surprise when the dragon she needed almost appeared right in front of her. Kayin could feel her power seeping from her. "Hello Anila, I am Kayin. You know, Semi Goddess doesn't really fit you anymore..." She mused, glancing at the smaller dragon before her. It made the female wonder where the leader was, seeing as the two were so closely knit together it seemed like she was going to have to pull them apart to talk with her. Now it was almost too easy. But she had to ask. "Where is your mortal partner? Did he leave you for some dragoness that wouldn't have to watch him die?" Kayin would admit that was pretty harsh, but before she left her realm she couldn't see what he was doing as it was focused on Anila so she was interested in why they were separated.

Glancing around at the territory of the SkyWings the goddess couldn't help but feel like another dragon was going to see her when she was done here. With a slight frown she cloaked herself from the mortal eye, while the goddess in front of her should be able to see her just fine. Although to anyone else it would seem as if she was talking to the wind, which maybe she was being the former Semi Goddess of the SkyWings, being related to the wind and all. If not, well, every tribe had its few crazy dragons. "If you prefer, we could go someplace more private to talk." She suggested, looking back at Anila with a tilt of her head.

Kayin smirked at the young dragon's attitude, following the dragoness into the castle and a quiet room with no other dragons around. At least she was complying to her even though she was a complete stranger to the new goddess. Anila turned and glared at her, getting right to the point. That was a good trait to have too. "Well Anila, can you not feel the power flowing through you?" Kayin asked with a curious tilt of her head. "I can feel it, and although it may be bundled up inside of you it is slowly seeping out. Here, close your eyes and look inside of you, inside of your power. It's more than just the winds, isn't it? Maybe more to do with your SkyWing heritage, but as a Goddess I'd expect more." The bigger dragon waited to see how Anila would react, and if she'd be able to see anything new.

Even if she couldn't feel her power, at least she could tell that it wanted to interact with hers. There seems to be only one other option left. "If I told you that you are a goddess - A Full Goddess - it would seem that you would not believe me. Let me show you." she said, holding her paw out to the small goddess. When she would take it Kayin would take them forward in time, where Anila and Tion were together in this room. "Don't worry, they can not see or hear us," she stated, "But do you notice, Tion is old, while you look just the same as you do now." Smiling, she let Anila take it in. Upon hearing the door open, she craned her head over, only to see a figure she didn't expect. It was like a clone of Anila and Tion together. "Erm..." Kayin quickly took them back, hopefully before Anila saw the unexpected visitor.

"Did that explain anything, or are you going to have to see more?"