These species are all not as strong as dragons. Those of these species will be granted the lesser species color. The rouge species Manticores, Griffens, and Thunder Birds may join any tribe as a citizen. However no species including the fire and ice Phoenixs may have the tribe color unless they receive a rank above citizen specifically by the leader of that tribe or someone appointed by them with appropriate power. 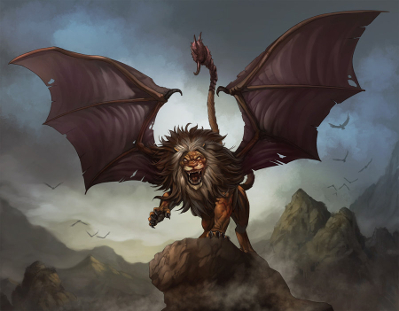 These creatures are distinguished by their body of a lion, tail of a scorpion, and wings of a bat. They are the largest of the lesser sentient beings. They can reach up to 70 feet in height. Unlike some of the other lesser species Manticores don't have any big flashy special powers. They reply upon their incredible brute strength and the paralyzing toxin within their scorpion tail. Their tail is capable of piercing the hide of nearly any unarmored dragon and paralyze them, except EarthWings. They reside as rouges within the EarthWing territory and are considered the reason for the EarthWings developed immunity against and use of poisons and toxins. After the humans invasion of their territory the Manticores nearly went extinct. Though they are strong Manticores are incredibly slow with the top recorded air speed of 30 mph. Manticores have no distinguishing personality traits, every individual is completely unique.

Thunder Birds reside as rouges in every territory with the exception of the lands the Phoenixs inhabit. They can reach up to 40 feet in height and come in all verity of colors. The top recorded natural flying speed is 70 mph however these birds have the ability to channel electricity through their muscles to reach the top speeds of SkyWings. Doing so puts a large strain on their stamina and magic reserves and can't be maintained for long periods. They have an affinity for electricity like the SkyWings. Individual Thunder Birds lay claim to a very large amount of territory as their home and so Thunder Birds are far and few between. Although social they are very territorial over uninvited lesser species. They all share a common pride but even so they tend not to dare make a fuss of a dragon entering their territory, especially since a sizable portion of the Thunder Bird population is borrowing from the territory of dragons. 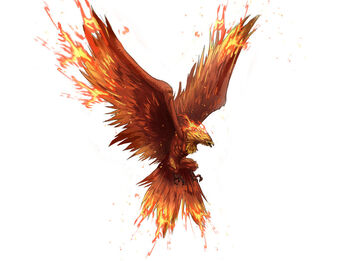 These tiny little guys are the smallest sentient species with the exception of humans. They can grow to 20 feet in height. Though small these little buggers are naturally fast with the best reaching a top speed of 90 mph. They have no physical hope to defeat anything even in the medium size range though. Instead they upon rely their powerful fire abilities that surpass even the FireWings and have a talent for magic. Their fire can reach temperatures up to 3,300 degrees Fahrenheit if they are dedicated to fire.

The largest of the birds these guys can grow up to 70 feet in height. They aren't as strong as the comparatively large Manticores but they are tough, skilled fighters, and could hold their own against one. They can't breath cold frost like the IceWings but they can create the hardest ice ever known comparable to the hardest of armors on their body. Miraculously they can still fly while completely enveloped in this armor but only at a maximum of 20 mph. Unhindered by their ice they can fly at 50 mph. Their ice is also incredibly sharp and can easily pierce low grade armors. They don't have magic though and are restricted to this ability.

In a bid of power long ago the FireWings managed to steal the Ice Phoenixs from the IceWings and pretty much live as slaves to FireWing families. In order to survive the heat they have to coat themselves in their icy armor at all times and as a result have little energy for other things. These exotic creatures, Griffins, are most commonly known for their bodies and back legs of a lion, front legs of a bird, head and wings of an eagle, and ears of a donkey (Or no ears at all). However, there are many different creative variations of this combinations. Some are much bulkier than others, some thinner and swifter, and they come in all different kinds of color schemes with their pelts and feathers. However, one thing they all have in common is their bodies of mammals and heads of birds, generally a hawk or eagle. Some even don't have wings. It particularly depends on what region they were born in.

However, the Griffins can grow up to as tall as 50 feet and can go as fast as 35 mph. Strength, appearance, speed, and size comes in all shapes and sizes with these feathered beasts. They have the talons capable of shredding through flesh and scale, enough to protect themselves, and has eyesight as keen as a hawk's. They have no elemental properties but do have elemental resistances, and mostly rely on their core strength and power to overwhelm an enemy.
_______________________

For anyone who makes these, keep them away form Rii, she will attack them as shown when she already attacked one of Rayla's giant eagles. Rii hates aerial raptors who aren't dragons. Pretty much all of these new species would be on her kill or eat list.

Sorry Rayla I get you and Rylatha's names mixed up ALL the time. I think I meant her not you. XD