Name: Sora Kylma Crystallos Markov
Alias:
Age: 36 Years
Gender: Male {he/him}
Sexuality: Pansexual
Personality: Sora is a very reserved dragon who likes to keep to himself. He cannot be bothered to talk to others, being very stuck up. He is prone to scoffing when people speak to him. Commonly rude to others he does not know, or louder dragons. He does not enjoy speaking to others. He definitely thinks he is smarter than other dragons, though he is not. He still holds himself in a higher degree. In his opinion, very few people are actually worth his time. He hates being interrupted, especially when reading. He holds grudges for a long time. He tends to avoid others, mostly in attempts to avoid interaction. However, he is afraid of failure and is very easily stressed. He will break down quickly.

Interests:
♡ Sleep
♡ Studying
♡ Reading
Dislikes:
♡ Being around lots of dragons
♡ Fighting
♡ Not staying on schedule

Height: 60 ft {18 m}
Scales: Dull blue-grey, diamond shaped and tightly fitted
Eyes: Very bright baby blue
Appearance: Sora is not visually interesting at a glance. His scales are a dull steel blue without a lot of shine. His eyes, though, are strikingly bright blue and very cold. His body is lithe and unusually thin. He has unusually sharp canines.

Special Abilities:
♡ Can spit heavy ice balls (similar to cannon balls) that are long-ranged weapons. They basically hit similar to a fist, but harder. They can cause bruising and are generally painful. They can go as far as 45 ft.
♡ IceWing ice breath
Weaknesses:
♡ Eyes are sensitive to bright light (can loose vision temporarily when outside for too long, with flashes of bright light or when seeing fire, etc)
♡ Thin scales
♡ Easily overwhelmed
♡ Gets tired easily; not very physically fit
Combat Style: He tries to stay in the air or as far from his opponent as possible while spitting ice at them. 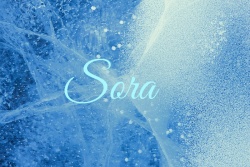 For the shield, you say spears and imapling attacks. Is his for human weapons and a dragon striking it will most certainly break it?

Changed have been made, as requested.

Indestructible shield is overpowered when only weak to fire, as that is saying it can block anything not related to fire. If it is going to be indestructible, needs a big side effect from using it, or weaken the shield down as you are a hybrid.