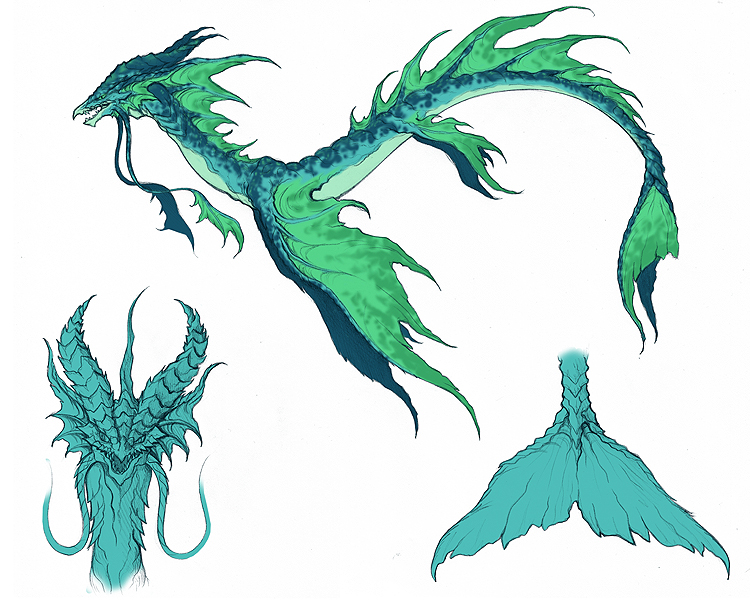 Personal Info
Name: Qualzexcta Jaguasa Dermain
Alias: Qual or Jaguar, sometimes Quail, but not usually
Age: 650
Gender: Male
Sexuality: Heterosexual
Personality: At first glance, most would see Qual as an aggressive loner, as he tends to snap at most people who try to talk to him. But this is only because he is trying to protect the dragons that he loves, and doesn't want to hurt anyone. Once you become close to him, Qual can become incredibly protective, and very loyal. He generally wanders off to help his own sanity. Why? Well, when Qual was younger, he killed a young hatchling. Ever since then he has always liked the taste of dragon, and this has drove him into cannibalism. He, however, keeps this a deeply tucked away secret, and would probably flee to the deepest corners of the earth if anyone were to find out.
Interests: Spending his days wandering through the ocean, eating, attempting to help out with protecting the tribe/just being helpful in general
Dislikes: Being in large crowds, around injured dragons, being hungry
Fears: That his secret will be discovered and he will be banished from the Seawings
Enclosed spaces

General Appearance
Height: 150 feet
Scales: They are an aquamarine ish color on the top, with a sea green color below, and on the fins.
Eyes: One's green and the other's blue
Appearance: He is a long, rugged sea dragon, with strong legs to paddle through the water, that have great fins on his side, front legs, back legs, and running down from his head to his tail. He had a large maw, with thousands of sharp fangs. His body resembles that of the picture shown up above, slender and quite long. His length is roughly 800 feet long, including his tail. Like most seawings, he has beautiful symbols on his side which will light up in order to communicate in aquatic to other SeaWings

Skills and Abilities
Strengths: Over all else, Qual has incredible brute strength. It is one of his strongest factors. His overpowering jaws are able to clamp down and stay shut with the strength and speed of a crocodile. Unlike a crocodile, clamping his jaw shut isn't going to keep it shut. He is also quite patient, as he can wait in one spot for hours while he waits for prey to arrive.
Special Abilities: Can swim to depths of nearly 36,000 feet. He can also shoot a powerful blast of water at his opponent. Underwater, the force of this attack can shock/stun enemies, but it can't hurt them. Above water, it can push enemies back and cause minor injuries.
Weaknesses: His big size hinders him quite slow, and he is useless on land. He spends his days in the ocean. He also does not do well with the cold, as it will cause his gills to become dry. His fins are also pretty delicate, and easy to harm. He also can't fly.
Combat Style: Stun then go in for the kill.

Background
History: When Qual was a young hatchling of merely four years, he slaughtered another child, much older than him. A bully, but nonetheless, it was still murder. But that wasn't the thing that had sent him home crying. It was that he actually enjoyed the taste of dragon flesh. He found that he would constantly sneak out and prey on smaller dragons. Now he is simply seen as a loner, and no one knows his true history....
RP Sample: Nah