The sun was still high in the sky as it shone its light against the isle of the Shadow Refuge. The palace's great walls rose high into the sky, glistening darkly in the suns rays. In the palace, tucked away in the athenaeum, Casimira hummed cheerfully as she worked. Herbs, plants, scrolls and other bits and pieces were scattered around the desks and workspace as she tried again and again to perfect the key. However, the more she had worked, the more that the key seemed to be further and further away from her grasp.

With a quiet huff, Casimira sat back on her haunches, her head tilted to the side as she examined the scrolls before her. Idly, her claws fiddled with the tip of a pen as she considered and tried to figure out just what she was oh so clearly missing in her experiments. But alas, nothing came to her. Instead of packing her research up, Casimira left it to spread across the desks and floor. Everything was in its perfect place and she more than needed it to stay exactly where it was. This was proven by the pieces of string which connected various plants to one another, or idea and concepts together. But alas, she was running short on ideas.

Casimira closed the great door leading to her experimental room, a bit of an annoyed huff coming from her. One day she would figure out what she was missing. But it didn't seem to be that day just yet as fate tested her patience...

She took a walk towards the end of the hall, wanting to head towards the palace grounds to somewhat relax there. Her claws would faintly click on the hard floored hallway, her eyes searching for where to go as her heart and mind chased down her 'key'. Humming cheerfully, yet quietly to herself once more, Casimira wandered the hallways, unknowingly going in rather large circles as she kept taking the wrong turns. Eventually, her eye ridges furrowed into a frown as she recognised the familiar halls again and again. Her cheerful humming slowed, before her horned head looked left and right. 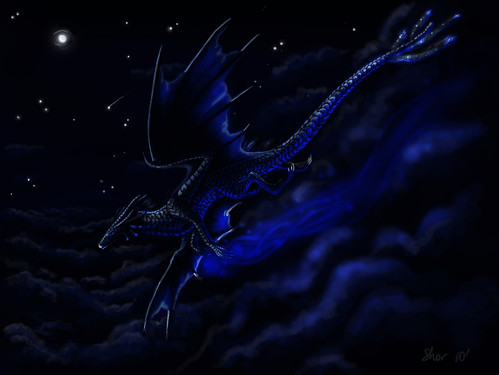 Re: Growing Concerns (Private with Tenebris)

Tenebris had left the Grand Hall which served as the audience chamber of the Palace, finishing not a open petitioners session of the public but merely hosting the private retinue and entourage of the Royal Cabal. The matters discussed were tedious and trivial as they ever were. The day to day governance and daily upkeep of the Isle’s territories had a weary effect upon Tenebris, as did the council of his Cabal itself. Nerokius didn’t trust Vesanus and Vesanus himself didn’t trust any of those favoured by Tenebris. Leaving the chamber and making his way to the Private wing of the Palace Tenebris allowed himself to sink from his usual domineering austere posture after he was out of the scrutiny of prying eyes. As of late Tenebris had become far more and more nocturnal and these affairs being held in the hours of midday only added to his weariness and fatigue.

Releasing a long drawn out sigh as he walked solemnly through the black marble halls of the Citadel, Tenebris paused only for a brief moment to stare distantly upon a reflection of himself within a mirror which hung upon the vast walls. His eerie sapphire eyes seemed reserved and dark, but there was no denying the evidence of his lack of sleep as the same azure orbs were plagued with a sense of bloodshot. For a period Tenebris wondered if his personally retinue actually noticed, perhaps not, or maybe they just preferred to avoid such a conversation knowing the results. Tenebris continued to proceed onward with a slight shake of his head as he returns himself to reality, his graceful steps almost as if he was gliding across the floor.

The continued navigation of his halls was an exhausting one, it seemed like every step was laborious in its own way, he almost didn’t realise the dark figure in the centre of the hallway as he turned a corner. Hesitating for only a brief second, he raised his head as he took a regal pose. He may of even seemed daunting and intimidating as his dark foreboding figure then began to move with purpose and revitalised speed as he neared the other. His hoarse well cultured voice rang out as he called to the other shape before him “Ah, lost are we?”, radiating with a new sense of pride he often found others straying the halls lost or actually in search of him. There was no malice to such a thought as the Palace was after all attached to both the athenaeum and magisterium, such confrontations with others was seen as a delight and entertaining. Moving his thoughts away from the usual faces of his Cabal.
_______________________
Tenebris's Bio
A look at one of Tenebris's Publications as a Scholar