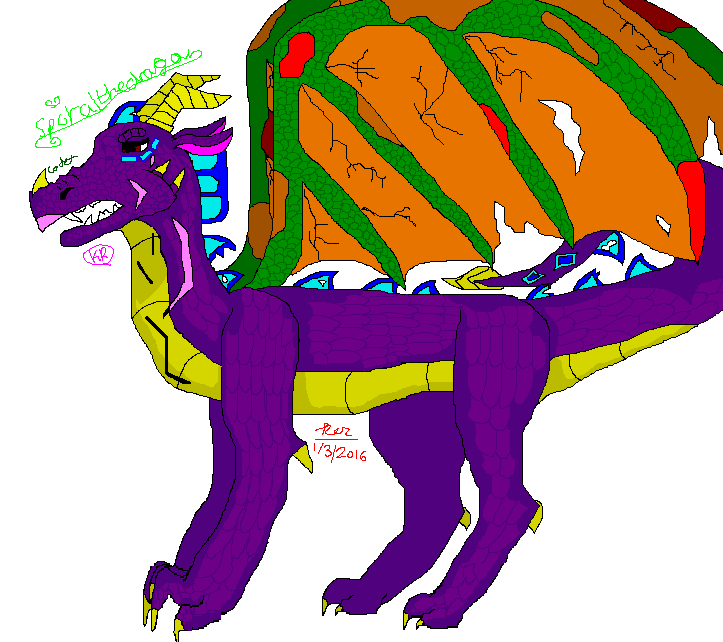 Personal Info
Name: Spiral
Alias: Nickname: Spy. Title: “The Winged Menace”
Age: 21
Gender: female
Sexuality: straight
Personality: Spiral is generally grumpy and doesn’t usually like to have others around her except maybe one or two close companions. She is very loyal, and will protect those she loves with her life. Even though she doesn’t like being near other dragons, as long as they aren’t rude to her, she will be pleasant to them. Spiral tends to keep to herself and usually hides away somewhere dark. She doesn’t like to show her emotions much (except her wings change color with her emotion, but she usually still tries to hide that), either. She generally will try to avoid contact unless contact is needed, and if it is needed, she usually stays quiet. Spiral thinks of herself as anti-social except for when it comes to the ones who are close to her, like family or trusted friends. It’s very hard to get close to Spiral, though, as she likes to push those who try away.
Interests: She likes dark places, rain, and hot places as well.
Dislikes: The cold. She can deal with it, she just doesn’t like it. Most of the time other dragons as well. Spiral dislikes being told what to do, especially by dragons who have absolutely no authority over her.
Fears: Spiral fears being left behind by the ones she loves

General Appearance
Height: 85 feet tall
Scales: Her scales are purple and are oval shaped, though the ones on her paws and tail are oval shaped with a sharp point/
Eyes: Spiral’s eye color is blood red
Appearance: A burly dragon with a more male-build, purple scales, yellow underscales, sharp yellow talons, claw-like things at the joints on her legs, scars on her neck, face, and underbelly, a beak-like thing at the end of her snout, a horn on the top half of the end of her snout, horns connected to her jaw areas, three dark and light blue special scales under her eyes, two large horns on her head, spikes going all along her back, wings, the right being more scarred than the left although both sides are scarred, and a semi-barbed tail.

Tribe Information and Status
Tribe: Rogue
Inheritance: 60% nightwing and 40% lightwing.
Rank: No rank
Family: Spiral doesn’t know. She thinks her family are all likely dead
Mate: Spiral does not have a mate but is looking for a loyal male to stay by her side.
Hatchlings: None

Skills and Abilities
Strengths: Her nightwing abilities are more dominant therefore allowing her to hide in really dark shadows (meaning close to pitch black) as well as her night breath, though she prefers not to use this. For it to be effective, she has to spray it at them for about 15 to 30 seconds. It can be sprayed up to 15 feet, because she is a hybrid, therefore her abilities are weaker than a purebred. Her lightwing abilities only show through her wings, although she can use the blinding light ability by shooting a small bit of light from her mouth, though it is also much weaker than a purebred lightwing's. It takes about 10 seconds for her opponent's eyes to adjust to the mildly blinding light. She is also very skilled when it comes to paw-to-paw combat. She is very agile, and though she is big, she can maneuver quite quickly. She is very clever and usually assesses a situation quite quickly, and also how to solve that situation.
Special Abilities: Her wings can change color to fit her emotions, though she tries to hide that. She cannot hide strongly felt emotions. She can also see quite clearly in dark places. She has overly strong jaws that crush hard objects quite easily, as if she were snapping a branch.
Weaknesses: She doesn’t fight as well in cold environments and if someone is holding one of the dragons close to Spiral against her she usually gives in just to get them back. She also does not like water environments and usually fights sluggishly. When introduced to bright light, her eyes take longer than a normal dragon's to adjust because usually she is somewhere dark and the sudden brightness messes with her eyes. When asked about her past or whenever it was brought up, she gets a little uneasy, and usually fights slower and with less accuracy.
Combat Style: Prefers claw-to-claw combat but sometimes uses her abilities. Spiral Prefers to fight in dark environments.

Background
History: Spiral never knew her real parents, only what tribes they were from. She was hatched by her aunt, who was a lightwing. Her aunt did not like her very well, and would constantly yell at her and occasionally hit her. As soon as she was old enough to fly on her own, she flew away from her aunt. As she grew older, her abilities got stronger, and she realized what she could do. After persuing some leads she got on her parents, she discovered that one was a lightwing, the other a nightwing. From then on she decided she would be a rogue, living away from other dragons.
RP Sample:
Spiral sat in her nest, looking up at the black night sky that was littered with all kinds of colors of stars. Every night she would watch one particular star while her nasty aunt was gone, the one star that glowed the brightest. Its white light seemed to pull her towards it and it seemed to speak to her. “Come to me.” She thought she heard it whisper. She shriveled back into her small corner of the nest as she heard the large wingbeats of her aunt. She wrapped her wings protectively around herself, hoping not to be noticed. Her aunt was a very noisy flier, so Spiral always knew when she returned from hunting. As her aunt landed in the nest, Spiral poked her head around one wing to see what she had brought back tonight. Usually Spiral would only be able to eat when her aunt was sleeping, and that was only if there was anything left. Tonight, her aunt has brought back a large goat, its body limp in her aunt’s jaws. Her aunt turned and saw her looking at the goat and snarled at her. Spiral squeaked and hid her face back under her wings. (I have no idea how to use this word document, but this is supposed to be a thought, so it’s like italicized and stuff.) One day… Spiral thought as her eyes closed and sleep fell over her like a warm blanket, pulling her from reality.

Heya Spiral and welcome to DRF! I hope you have an awesome time here, but before you can jump into rp, I need you to fix a few things up ^^

Her nightwing abilities are more dominant, therefore allowing her to use the mind abilities and hide in really dark shadows.

I'm going to need you to ask what you mean by mind abilities (as mind reading is kinda banned). I need you to elaborate and explain what your mind abilities are and how she is able to use them.
Just for clarifications, I would also like you to add what you think is a really dark shadow.

Her lightwing abilities only show through her wings, although she can use the light ability.

I also need you to explain what your light ability is. If she has both NightWing and LightWing abilties, they are going to need to be weaker than an average NightWing or LightWing who is specialising in that area or element due to her 'sharing' the power.

She can use her Nightwing breath as well, but considers it the cheaters way out of battle and does not prefer to use it.

Her breath is a mist that makes people go to sleep, I would like you to tell me how this works. How long they need to be exposed to the mist before they are start becoming affected by it. State the max range too please <3

She doesn’t know how or why, but somewhere along the line she acquired the fire ability

I am going to have to ask you to change this. This is because only dragons who have FireWing heritage are able to breath fire, and your dragon is a NightWing and LightWing hybrid. Please change your flames to something else.

Has two fangs that can spit venom

If your character was part EarthWing, I would have allowed this ability... but she's a LW/NW hybrid, and due to this, she doesn't really have access to venom or toxins. I am going to need you to remove this or change it to something else ;-;

In your combat section, or how they fight, you say that she prefers paw-to-paw skills, but in your strengths, you haven't said that she's good with them. I'd like you to add this to her strengths. Maybe put down if she's clever or not in there as well.

I hope that you can understand what I mean with all of this!

Sorry about the mind thing, kinda read it wrong at first. I was reading quickly ^^'
I tried to fix all the other problems, I hope it's alright now ^.^

Heya Spiral! I just would like you to change a few more things

In your app, you say that;

Spiral wrote: (she) usually never missing the area she targets

I'm going to need you to change this, as if you are ever in combat RP, it basically always garuntees hits on the opposing dragon. And no dragon is that skilled :p normally.. This is also somewhat power playing as she can force them to also take hits as well. Please just reword this sentence or remove it.