Sitting by the Fires of Fear [Private Reptilians]

Sitting by the Fires of Fear [Private Reptilians]

The whistling breeze of the night time air would breath softly through the darkness, like some dormant beast, the trees leaves rising and falling with every heaving sigh. This breath would be caught up by the tongues of the fire, as its beautiful tail flickered through the inky twilight, its embers lifting up on the breeze, leaving a trail of light in its wake. The illuminated form of a lone reptilian, sitting a some distance from the fire, could be seen through its bright dance. Her shape was darkened by the overwhelming light of the fire, compared to the rest of the darkness engulfing her, so perhaps you wouldn't be able to make out her frills, or icy appearance. She used the fire for light, and to cook her food, but avoided it due to her IceWing heritage.

Her eyes were glossed over, cold, as she stared down at what was left of her meal. Half a piece of venison. It had been a whole deer, but now there was nothing left of it except for a small piece of meat that she could fit in her hands. She would stare at the fire for a few moments, quiet, while finishing her meat.

After a while, she would stand up, the ice that had formed under her rear cracking a bit as it would quickly melt from the rage of the fire. She walked over to her backpack, the darkness, combined with suddenly turning away from the bright light of the fire, making it difficult to locate. Once her eyes adjusted, she would quickly pull out the small, leather, tattered book. It felt light in her claws, but a heavy weight was tearing down at her heart as she stared at it.

It had been roughly two weeks since her encounter with her father. And she hadn't had much time to read over the book lately, due to her traveling. Her goal was to get to the ocean by at least two months. It would be difficult, but she would get there eventually. However... there was still a burning decision weighing in the back of her mind. But she chose to ignore it.

Sitting back on the log where she had left her slice of meat, she would begin to flip through the pages. Once she found where she had left it, she would begin to scan the page, her face deep with concentration. Her tail would flick back and forth patiently as she would whisper quietly to herself, studying the pages of this old book. And despite the warmth of the flames, it still remained as cold as ever, keeping an ever lasting feel of winter.

While Rayla sat reading the book, totally preoccupied, in her reptilian form, and with the addition of the fire, she would be completely unaware of anyone who tried to sneak up behind her. Of course, unless, they made themselves known. And this could happen in more ways than one....
_______________________
Virgo♀ - IceWing Queen(Age 14)
Rayla♀ -  Demi Goddess Rogue(Age 40)

Re: Sitting by the Fires of Fear [Private Reptilians]

Cerulean had found herself lost in the vast wilderness yet again, and it wasn't very pleasant for her. Bugs kept flying into her face, she kept stepping on sharp twigs, And she kept getting her tail caught in bushes and brambles. Don't mistake her, Cerulean loved nature, Just not in her face like this. Her golden armor and tribal clothes were all dirty and needed to be repaired, And her hair was all messy. And worst of all, she was hungry.

She decided to stop for a short moment to rest her reptillian feet and try to get a sense of where she was going at the least. She sat down on a fallen tree and looked around, peering into the distance. She could hear the crickets chirping and the occasional owl's call or a wolf's howl. She could see the trees towering over her head around her. She could feel the uncomfortable bark from the fallen tree she was sitting on, and she could taste the dryness and the need for water in her mouth. But sitting there and thinking about her senses wouldn't help her at all.

She was slowly getting up when she thought she heard something, causing her to freeze and try to hone in on what she was hearing. The crackling noises a campfire made..? As quietly as she could, she tried to locate where the fire was coming from, and there she could see the faint flashes of orange and red in the distance. 'Finally, some help!' she thought to herself. She made sure to be quiet and polite as she made her way towards the fire, she didn't want to be loud or intrusive. The closer the got the more paranoid she became. What if it was a dragon? What if it'd eat her if it saw her? What if-

She paused immeadietly and felt her heart drop, She had stepped on a large twig right as she was approaching. All she could do was gulp and hope for the best.
_______________________
Another one bites the dust! 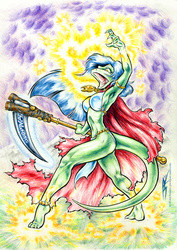 Posts : 3
Reputation : 0
Location : Where the grass is greener!

Re: Sitting by the Fires of Fear [Private Reptilians]

Rayla sat against the fires, her eyes half closed, staring down at the book, totally engrossed in it. She would continue to mutter small phrases in Auroran. The language sometimes seemed as if it had always been there with her, even though she had never heard of it until she had met Ouroborus. Sure, Gaea had spoken it, that one time they had encountered each other when she was about eight, but that didn't mean Rayla had known what it was. However, the thought of Ouroborus made Rayla growl, and shake her head.

She should be getting some sleep soon. She hadn't the faintest clue what time it was, but she knew it had to be late, as the sun had set quite a while ago. She wasn't the best at telling the time, but all she knew was that she was becoming tired. And she was going to be waking up at the crack of dawn. So, if she didn't want to be exhausted when she had to travel another 40 miles or so when she started walking again.

But before she had a chance to even put her book away, and while the thoughts of sleep were only just beginning to seep into her mind, she heard a snap. Her body would go ridged, eyes narrowed, and muscles tense. Slowly, she'd move her hand to the cover of the book, slowly closing it, gently resting on the cover.

After but a few moments of silence, she spun around, glaring through the trees. Despite the fire messing up her vision, she still spotted something through the branches. A small growl would begin to escape her throat as she glared daggers at the intruder. Moving her hand slowly from the book to her blade, which rested by the stump, she'd snap at the rogue.

Similar topics
» Tempest, the Fires Fury [Needs Re-approval]
» Fear and Courage
» There's more than one? [Private, Pyrr]
» The Only One That Can See (Private With Mirage)
» To become a shadow (Private with Sly)