Personal Info
Name: Cloud
Alias: The Lightning Child
Age: 3
Gender: Female
Sexuality: Pansexual
Personality: Cloud is a very bouncy and talkative dragon, giving her the nickname the lightning child. She could talk someone’s ear off if given long enough. She loves flying around and playing, though underestimates her strengths at times. She is often found flying around and saying hello to everyone she sees. She is a very curious dragon often asking a lot of questions while watching adults do their jobs. While being very talkative she understands if someone wants to be left alone, leaving to go talk to someone else.
Interests:
Flying: Cloud loves racing the wind and trying to beat her old records. She will ask other dragons to fly along with her at times, and it is one of the few things she will pester you with.
Cloud gazing: whenever she is calm, which is not very often, she likes to lay and watch the clouds go by. She likes to lay with other hatchlings and makeup stories for the clouds shapes.
Sitting in the rain: she loves sitting in the rain, it feels nice against her scales. She jumps in puddles. She likes to be alone and quiet, seeming to be in her own little world. In the winter she tries to stand in the snow.
Dislikes:
Night: she doesn’t like the night because it gets harder to see clouds. She also doesn’t like that it gets colder because she can’t stand in the rain for as long.
Cloudless days: she loves watching the clouds so when there are none she doesn’t like it. There is no possibility of rain and no possibility of cloud watching.
Sitting still: She loves running around and playing so when forced to sit still she gets annoyed. Shell usually fidget and tap her paws. Her tail will swish quickly, sometimes hitting people with it accidently.


Fears: Being alone, she is terrified of being alone. She gets nervous even when people leave her alone for a day. She starts running around trying to find a person.

General Appearance
Height: 2’4
Scales: She has a light grey scales with a sky blue belly. She has yellow stripes down her body.
Eyes: Sky Blue
Appearance: She is a small light grey dragon. She has big pointed horns. Her muzzle is sky blue, along with her eyes. She has bright yellow stripes down her entire body and tail. Her wings are grey with sky blue underneath. She has a small spike at the end of her tail. Her toes are clawed shaped, since she has no claws.

Tribe Information and Status
Tribe: Skywing
Inheritance: Purebred Skywing
Rank: Hatchling
Family: Cloud does not know her family. She never met her clutch mates.
Mate: N/A
Hatchlings: N/A
Skills and Abilities
Strengths: She is a good runner and flyer, pretty fast and nimble. she can fly 40mph when shes an adult and run about 30. She is a good talker, mostly opting to avoid fighting and talk things out
Special Abilities: Cloud can use electricity, but due to her young age usually hits herself as well as her opponent. It causes some harm to her but not as bad as it does to her opponent. she can only do it 10 times a day, an hour and a half between being able to shoot. As she grows up she can control it, but she still sometimes shock herself. The lightning can go up to 50 ft  away from her when shes full grown, only 12 now.
Weaknesses: She can’t sneak up on anyone since she talks too much, and is susceptible to earth attacks. She is not a good swimmer and usually avoids water if she cant touch the bottom.
Combat Style: She fights from afar trying to use her lightning to hit an opponent, most of the time she hits herself as well since she is so young.

Background
History:
RP Sample: Cloud wakes up, her stomach growling loudly. She stands up her head dripping down tiredly. “I need to find some food”. She flies around saying hello to every dragon she passes by. She searches for some small prey, her tail swishing gently in the breeze. She was obviously still tired by her half closed eyes and droopy head, which doesn’t seem to be like her. 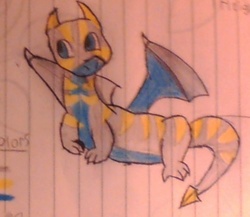 Hello there and welcome to DRF! I'm Aero Dynamic, a forum moderator here, and I'll be reviewing your app today!

Strengths
'She is a good runner and flyer, pretty fast and nimble.(What is your dragon good at? Both physical and mental strengths must be included)'

Just so we know could you say about how fast she is on land or in air? You might want to add a mental strength as well. Also just need to erase the things in the ()'s ^^

'Cloud can use electricity, but due to her young age usually hits herself as well as her opponent.'

Just wanting verification but this is the range she can shoot at, correct?

'She can’t sneak up on anyone since she talks too much, and is susceptible to earth attacks.'

Considering both of her strengths are physical, is there any physical weakness she has? Maybe not good at swimming?

On a side note would you like your name to be changed to just 'Cloud?'

Alright fixed it. also no thanks

I guess I should've given you the average speed for SkyWings, sorry! On average a SkyWing can go around 100mph as an adult, so if you'd like to make her go faster you can ^^