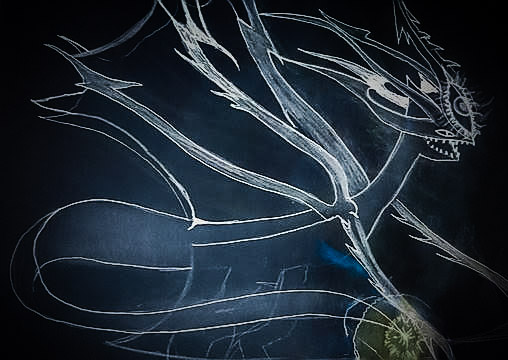 Personal Info
Name: Phase
Alias: Stealth Phantom, Blur Phantom
Age: 26.5
Gender:Male
Sexuality: Straight
Personality: Unlike his twin brother, Soulcry, Phase is incredibly reserved.  He’s brilliant like him, though.  He is calm, well spoken, clear minded, and quiet.  Phase likes to interact, but he doesn't hate loneliness.  He doesn't consider it loneliness though.  He is like a shadow, and loves lurking in shadows.  He is shy, slow to anger, peaceful, authentic and genuine.  He is carefree and just.  He doesn't like standing up for others, but he will do it if he feels he must, but it’d begin with a stutter and meekness at first before shouting.  He is benevolent and compassionate.
Interests: Travel, solitude and meditation, dragon watching, nature, peace and quiet.
Dislikes: Loud noises, provocative behavior, cheesy pick-up lines
Fears: He is generally timid and can be startled easily by anything, larger dragons.
General Appearance
Size: 33 feet long, 9.5 feet high
Scales: Dark grey, translucent covered by a grey coat of fur
Eyes: Glowing yellow
Appearance: Translucent, dark, grey-blue body, yellow energy sphere at the tip of his tail, four wings connected to arms, a feint yellow glow.


Skills and Abilities
Strengths: Agility and steadfastness.  Although light on his feet, he is persevering for his meekness.  He is stealthy, keen, and elusive.
Special Abilities:
-Blur Illusion:
Within the radius of 50 feet, for 30 seconds used every 3 posts, Phase can either emit dark, blurry waves from his body, or spit a node, which will pause in place at his command, or slow to a halt and do the same thing.  The effect blots out all light for 30 seconds, either from him or from the node.  (Note: a node in this case being a small, shadowy ball.)

-Scopeview
Within a narrow gap of 10 degrees, Phase can view a very far distance away of at least 3 miles, and variable to 10.  He can only enter this by focusing extremely hard, and only for up to 15 seconds at a time.  Only may be used every other post, and cannot use his other abilities while he uses it. His vision outside of 10 degrees in this mode is obscured by blur.

-Illusion Expressions
Animated images or symbols can be projected from his foreye.  Typically these reveal his mood when communicating.  They can only be projected within a small radius of a sphere around his head.  For an example, he will project a question mark if confused or when asking a question, or project an exclamation mark when in shock.

Weaknesses:
Courage: he is scared easily and doesn’t like being harmed., especially being lightweight and easily hurt.

He is weak to Lightwing based attacks, and is typically blinded by bright light.

His foreye is sensitive and is a weak spot, so is his belly.

He has no resistances.

Combat Style:
Flee.  He will never fight.  His abilities are used defensively not offensively, he is a peacemaker, not a fighter.

History: As stated in Soulcry’s bio, the two were born in Nightwing territory.  Whereas Soulcry felt unwelcome and daringly ran away, Phase felt right at home.  He was raised by his mother, a Nightwing, who loved him dearly.  He eventually joined the Nightwings’ army as a covert scout.  Loyally, he offered to to be a stealthy spy, as long as he was promised to never face combat.
RP Sample:
“Soulcry?” Phase worryingly shouted into the woods, “Soul?”  There was no reply.  The two dragons were about 7 years of age when Soulcry decided to run away.  Phase told his mother, and she panicked.  They had guards summoned to search all of Nightwing territory, but months later they gave up.  He was pronounced dead, no longer missing.

Phases flashback ended as he silently looked over the horizon.  He spent a lot of his time still seeking his brother.

But today, he saw a faint silhouette figure in the distance.  He used his scopeview to see what it was.  He knew it was a dragon, but he doubted it was his brother.  He was astonished to see the white dragon Soulcry after all, and saw him dive towards one of his favorite resting rivers.  He was immediately elated with joy and danced with enthusiasm circling his body over the ground he previously was standing upon and flew towards the river.

'Within the radius of 50 feet, for 5 seconds used every 3 posts, Phase can either emit dark, blurry waves from his body, or spit a node, which will pause in place at his command, or slow to a halt and do the same thing. The effect blots out all light.'

When you say 'for 5 seconds' does that mean that the light is blocked for only 5 seconds? If not then that needs to be clarified for how long he can block the light.

Also, what is 'spit a node?' I have no clue what it is and when searched it just comes up as coding.

'Phase can enter a mode of extreme vision where he can broaden his vision to see 150 degrees in front of him, which has a viewing distance of his normal vision. Also, he can focus simultaneously within a much narrower gap of 10 degrees, a very far distance away of at least 3 miles, and variable to 10. He can only enter this by focusing extremely hard, and only for up to 15 seconds at a time.'

Distance of 150 degrees should be toned down as 10 degrees lets him see farther.

'An elusive, blurry aura can be emitted from Phase for a short period of time, (about 5 seconds every three posts) typically to elude to escape to a place. The field generated has an extremely weak shielding effect which temporarily can cause a shock to the opponent, if they somehow manage to make physical contact.'

If he uses this to escape does it make where he is blurry or invisible? Or does it just create a shield that shocks someone if they touch it? This needs to be more clearly explained as to what it is.

Oh, for the vision I just meant that the distance he sees should be less than normal, not that you have to tone down the degree. Maybe it's like a wolf and his vision is blurry but can focus on moving this. Either way, just make it so it's less than his normal vision in some way please.

Hey, I noticed the app wasnt finished ajd I wanted to post on here so you didnt forget it. Also, to avoid confusion I also noticed your using am alt character but on thus account. If you may please you that account you created yoyr alt on.
_______________________
Bassasail, SeaWing Guardian
Attor, Starlight Sovereign
Gemna, The Last IceWing Scholar
Ragnarok, EarthWing Adviser
Abbadon, Hildrhilts Hatchling
Incus, Demigod of Fire
Malek, EarthWing Scout
____________

Scroll up to see what was said. And do you still want this character? If so, it can be moved so you can make whatever changes you were asked to make before. Otherwise, no one wants to review it, Bass was just wondering if you still intended on making this character.

Alright. Now what are you going to do with Hydra? You should create a character with this account so when you post on topics as your alts, staff won't think you're posting with an approved character.

Well until then, only reply to topics on your alt account.