The Fire loner would not give up, he continued to blast his rage towards the pale dragon. She was stuck inside the forest of tall trees and couldn't find a place to take to the sky. The clearing was coming up quickly and Relonikiv saw the dropdown from a cliff that led into a deep ravine. She came up with an idea, but it would be very risky to partake in.

The sparks and wisps of flames behind Relonikiv pushed her forward to put her idea into full action. She was about to escape, but her antlers caught onto the thick twigs and leaves of the trees. She was stuck, twisting and turning her neck frantically as the loner drake came closer and closer. He soon left the sky, speeding towards her with his talons open. Quickly, he slashed against her body, crimson blood pouring from her open wounds. She let out cries of pain, feeling his claws and teeth tear into her muscles and scales. Quickly she flexed her scales to pop up, making it harder for him to land a bit on her since the tips were pointing up at an angle. He growled in annoyance before blasting more flames.

A single flicker ignited the branches, allowing Relonikiv to break free with the other drake on her. She ran straight to the cliff and dove right into the ravine, dragging the other dragon with her into the frigid water. She soon resurfaced, feeling the talons release their grasp upon her. Relonikiv writhed free out of the water, quickly heaving herself onto the sand and dirt.

The fiery drake left, screaming at the eastern dragon before fleeing to a warmer, hotter place. Breathing heavily, Relonikiv tried to pick herself up, but her burns and wounds made it much more difficult for her to move. Not to mention her wet hair weighed her down. Shakily, Relonikiv turned to lick her wounds and try to remove all the dirt from them. Tired and shivering, Relonikiv settled down and curled herself up tightly in a ball, trying to conserve heat.
_______________________
Relonikiv's Info

Rye was just wandering the forests when he smelled the scent of burnt trees and scales along with singed fur. It was not a pleasant thing. His long whiskers could pick up the vibrations, but he could not tell exactly what they were. His guess was a fight and an angry FireWing, but he couldn't be sure. But right now, he could tell that someone was hurt and he needed to help.

Following the scent and vibrations he finally was able to see what was going on. A dragoness was running from a FireWing drake. What had caused him to get so mad Rye would never know, but he knew that she was in trouble. The only thing he'd really be able to do would involve more fire, and he guessed that wouldn't really help, considering this dragon was a FireWing.

Before he could take another step forward the white dragoness had gotten herself free and began to run again, the enraged dragon following him. Rye followed after them, quietly and from a distance. It would help her if the dragon followed him, but he was still cautious. He didn't want to get hurt as much as she didn't want to.

The male got startled when he saw her figure disappeared over a cliff, the FireWing following her trail. Once he finally caught up to look over the edge the FireWing was flying away and he ducked down, hopefully not being seen. He looked back down, seeing the dragon laying on the sand, wet and burned. Even if he might startle her, he still had to help.

Rye first started by flying down, landing in front of her to where she could see his presence. Slowly, he approached her, trying to show that he meant no harm before analyzing her burns and cuts. She had antlers like he did, something that his sister would have envied.

Before he could warm her up he needed to heal her, so the drake flew off to collect some mud, carrying as much as he could in his paws and mouth, anywhere he could store it. Rye just hoped she'd still be there when he got back, she was in no condition to move after that.

Once he did arrive back he place the mud down, glancing at her once more before lightly heating it up with his fire, but not enough to where it would be too hard to put on her. Then, slowly moving closer, he began to apply it to her wounds, hoping that she'd realize he was trying to help and not squirm or try to move away. The warm mud should feel good on her, warming her up a bit. It wouldn't heal her within seconds, but she might start to feel a bit better, at least with the warmth.

If that went well enough, Rye went to gather a bit of wood, setting it on fire so that she'd be able to dry quicker. He didn't want her getting sick if she was already going to be fighting those burns. After getting a sufficient amount, he sat down and began to slowly put his tail on her, trying to keep her warm with his body heat. If he had known this dragoness better he would have laid on her, but he wasn't sure if she'd be comfortable with that. Rye looked at her, wondering what she was feeling.
_______________________
[14:31:40] Azure Xavier : Rye. Where are thou?
[14:32:28] Azure Xavier : Is your humble coils, and majifencent body, thus coilled sadly in thou corner? 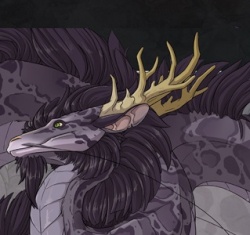 Relonikiv was in pain and already becoming colder and colder. Her body was soaked head to tail, her fur holding water like vines, her scales slowly relaxing into a normal position against her body. He eastern dragoness awaited something to happen, and luckily, it didn't take long.

She saw another dragon, one like herself, fly close to her. He drew close, and instinctively she unfurled and threw herself back, frightened and defensive. Her body, as much as it hurt, scrunched up in fear. The slits in her eyes widened like a cat as Relonikiv tucked her head in towards her chest, trying to protect her neck.

However, the presence of the other made her feel a bit more comfortable. He came closer, and she finally relaxed as he observed her wounds. She waited patiently, then saw him fly off in silence. She watched him leave, almost crying out for him to come back for her. She stayed silent though.

He returned swiftly and revealed mud. Relonikiv knew mud helped, but registered that putting it on her wounds would no doubt sting like venom. He heated it up, and the pale dragon could only watch. Soon, She was struggling and squirming around uncomfortably as mud was placed into her body. She bit her tongue to prevent hisses of pain from escaping her lips.

After what seemed to be forever, he seemed to finish his task and fly off once again. Would he return? She waited quietly, then saw him fly forward with wood. Ah, he was starting a fire. She watched him ignite the wood, almost shrinking back.

He, however, draped his tail against her. This stopped Relonikiv from moving around, for his warmth made her stay in one position. She was quiet (as usual) and decided to just accept the act of kindness.

He was looking at her, almost as if he was concerned. Relonikiv's head rested against her paws, her ice eyes watching him calmly. her ears air planed, signaling she was relaxed and non-hostile. If she was able to speak, she would've gladly asked him why he performed such an act of kindness to a complete stranger.

Even with the bit of struggle she had the male was still able to help her the best he could. With his help the burns should heal sooner than without, and with the mud protecting the burns there would be a less likely chance of her getting any infections along with it. He did feel bad for the way she struggled, but a little bit of mud would be a lot better than a big infection later on.

He watched her, noticing how she was watching him back. He wouldn't be surprised. If he was just hurt by some big dragon he wouldn't want another dragon to come and finish the job right afterwards. Luckily she realized that he wasn't going to do anything bad to her and even looked slightly relaxed.

Rye was about to put his head down when she suddenly began to lift her head, pulling out one of her paws. She wouldn't have been trying to attack him now, would she? He relaxed when she began to write in the dirt, craning his head so that he could properly see what she wrote.

He blinked at her question. The male didn't know how to answer. He hadn't been thinking about it, mostly just doing it. Taking a breath he said, "I'm not sure... why I did help you... It was mostly just... instinct." He wasn't one to talk much either. His sentences had pauses in between and he wasn't much for a long conversation. Maybe it's because he kept to himself mostly, only sometimes telling stories to his younger sisters. Even those stories usually had to go on for a few days.

Rye checked on the fire a bit, either to add a log or to poke around at it a bit so that it was warmer. He hoped that she was drying good and wasn't so cold anymore. Maybe after some of the embers got cool enough he could put them around her if she still needed some warmth. Then again, she was probably still a bit afraid of fire, considering she shrunk a bit when he first lit it. Maybe he'd be able to find some rocks to heat up instead.