Mono the different one.

Mono the different one.

Insert Image Here
Personal Info
Name: Mono
Alias: Shortened versions of Mono, Typus, shortened versions of Typus.
Age: 18
Gender: Female
Sexuality: Heterosexual
Personality: Mono is shy to strangers of her own tribe, and even moreso to strangers of other tribes. Once you get past the shyness her personality is happy, joyful, and overall upbeat and fun. One exception to her shyness is hatchlings. She tends to be quite a good motherly figure towards young dragons. She is also known for extensive poking and can be kind of annoying.
Interests: -Cute tiny things.
-Poking.
-Being arounds friends.
Dislikes: -Jerks.
-Being restrained.
-People wanting to do tests on her.
Fears: -Angry dragons. (As in yelling at her, not just irritated at the poking she does.)
-Having tests done on her.
-Large spiders.

General Appearance
Height: 25 ft, Length 45 ft
Scales: Snow white with five short thin black stripes around her back and legs.
Eyes: Mono is Heterochromic. Her right eye is Amber and her left eye is Brown
Appearance: Mono is bipedal, with her forearms practically 2 ft off of the ground when they are outstreched. Occasionally she will lean forward a bit and walk as if she were a quadroped. Her snout is kind of long and thin, and her eyes are a slightly larger than normal size.

Skills and Abilities
Strengths: Small and thin, Mono is highly mobile on the ground, and a fast flyer in the air.  Specifically, she can run 40 kmph on all fours, but she has beter stability, and she can run 50 kmph on two legs, but she is better in straight lines. Her flying speed is about 75-80 kmph, and she is, again, better in straight lines. She is also pretty intelligent, being very slightly above average. Her ability is also a good strength, except for when it is activated without her will.
Special Abilities: Mono's ability is one of a kind. She can shape shift. She can shape shift into one species in a genus. For example, she cannot shift into a SeaWing, because she is a dragon, but she can shift in to some kind of fish. Another example is if she shifts into a blue whale, she can no longer be any other species of whale, she must stay with the blue whale.
Also, whatever animal she shifts into, no matter what, is always a snow white colour, with one red eye and one brown eye.
Her breath is basically just an extremely bright light that she emits from her mouth. It doesn't leave her mouth, it just sits there for a while. It lasts about 6 seconds and has a recharge of around 20. It doesn't hurt anone, unless you stare right at it of course, but it's kind of just a distraction so that she can shift and flee.
Weaknesses: Her light frame means that she isn't very durable. She also has a four minute delay on shifting, and she can shift without her will if she is startled. She also has only basic combat tactics. Her only saving grace in the midst of combat is her agility. Even if she shifts into a super strong animal, she still has her basic skills, and she is still Mono, which means that she is still clumsy.
Combat Style: Mono, as I said, knows only basic combat skills, and her only saving grace is her agility. She strikes fast, with decent damage capabilities. Her claws are stronger than her jaws, as well.

Background
History: She was born.
RP Sample: Sicarius swatted the fly.
And it didn't die. 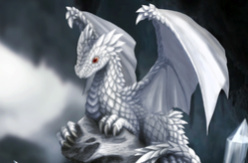 As Cele has approved, your ability is fine.

For Inheritance, you could remove the 1 LightWing, as you are purebred lightwing.

For Height, LW are at minimum 25 feet tall. Also, you should specify how fast they can move (Less than 80 mph, not sure max speed for LW doe)

And just a question.  Does she actually fear angry dragons?  And if she does, why does she do excessive poking?  (You only need one fear, so you don't need angry dragons unless you want xD)