https://2img.net/u/2717/40/57/02/avatars/1426-3.jpg
Personal Info
Name: Purple Space (PS)
Alias: he is often bullied for having a fluffy tail, so fluffy is a common one. Age: 20,000+ yrs. (human)
Gender: male
Sexuality: heterosexual
Personality: acting very professional around newcomers, higher ranked dragons and during fights, but once you get to know him, he can be very fun and playful. he isn't the biggest fan of making friends, he is a bit socially awkward. he is very good with younger dragons.
Interests: fly around and make up constellations. playing with friends and play fighting.
Dislikes: to tell anyone about his weaknesses or fears. also hates talking about the strange puff on his tail. he doesn't like small spaces as well.
Fears: the end of the universe. he himself, doesn't fear death, but he fears the death of others.
General Appearance
Height: 3,000 ft (1,000)
Scales: he looks as if he is transparent, he has purple scales that pull together to create a moving image of outer space, but a bit more purple than the one we know of.
Eyes: yellow glowing eyes, no pupils
Tribe Information and Status
Tribe: nightwings
Inheritance: crossed, most of his ansesters decised from starwings
Rank: in this universe, he is a fighter
Family: he has been reincarnated from the stars many times, if that counts as anything.
Mate: N/A
Hatchlings: N/A

Skills and Abilities
Strengths: he has extremely sharp teeth and claws. mentally, he is very good at dodging,amazing with aim, and camouflage.
Special Abilities: creating holograms with purple magic and predicting the future. (like most nightwings)
Weaknesses: embarrassment, if he gets embarrassed to badly he will flee. also the color gray, he has had a very bad past with a gray dragon.
Combat Style: cleverness is key.

Background
History: he is not from this dragon universe so here he has a different backstory. he was once one of the first members of the starwings. during his time there, he had met a smaller gray dragon who had no family or home. PS took her in as his own. later on, she made best friends with a seawing dragon, keeping it a secret. PS found out didn't think the others would accept this. PS made sure the gray dragon would never see her again. the gray dragon grew insane with anger and ran away. PS grew into deep depression once she left. he went on a journey to find her. he had never found her.
RP Sample: PS looked up as the black crow flew overhead, his eyes illuminated with the moons glow.
PS: there isn't much time, their coming.
_______________________
Purple Space 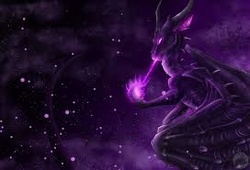 Giving a quick warning before staff swoops in and rips this to shreds, new StarWings aren't allowed under any circumstances. They have to be the children of the current StarWings, and even then they're not pure, so this is going to get denied. Sorry :/
_______________________
Asailia's Information
Alts: Adra, Neru, Wisp, and Zephyros
My DragCave Stuff:

I'm still trying to figure out how peeps even know StarWings exist. I mean some long time members don't even know about them. Oh and you should prolly check out the new members guide. https://www.rpgdragons.org/t3556-the-new-member-s-guide

Moving this to old applications due to new character app topic being made.
_______________________
Aero Dynamic|Dynamic Oreo|Wolf|Evaleen|Kaora|Rye|Atmosphere|Kayin|Khusavir|Thermo