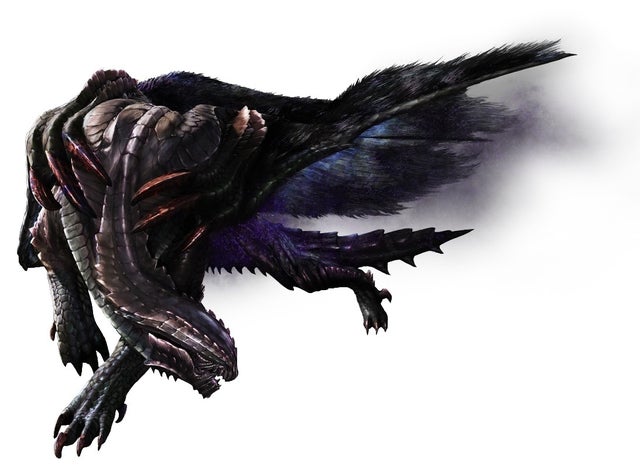 Fears: Swimming in any capacity, as you might imagine his body is not.. Water friendly.


General Appearance
Height: 24 ft tall, 72 ft long
Scales: Black
Eyes: Sicarius does not have visible eyes.
Appearance: Sicarius is technically hexapedal, as on his wings are another set of fully functioning claws that can act as legs, however they are typically folded up against his body, grasping his shoulders as seen above. Sicarius does not, in fact, have eyes, and instead uses long range, high frequency echolocation, meaning that the only one that can actually hear it is him, or those with the ability to hear that frequency. With this he is able to paint a picture of what is in front of him, and having used it quite literally every waking moment of his life he has long since reached the point to accurately pick out individual scales, pebbles, and sticks from a hundred meters away, at least. Sicarius's wingspan is large for his size, but nothing special.

First lets tone down your maximum speed to 110 kmh.

Despite my inherent dislike for Wyverns here at DRF they are on equal ground as dragons. That means equal intelligence and equal strength. The way you speak about them makes them seem like a lesser species.

This lasers breath may have no drop of but it needs to dissipate eventually. How long does it take to dissipate?

Chewing through organic flesh at such a high rate as well as the speed lasers are assumed to be traveling at this is too strong. Most LightWing lasers only cause mild burns on first contact and take some time to burn through flesh.

One question about special abilities:
" The beam reaches lengths of about 6 meters, and can go in a straight line seemingly forever, but they really only go about 200 ft before dissapating."

Could you add a personal weakness to your weaknesses? Then you should be good to go ^^
_______________________
Aero Dynamic|Dynamic Oreo|Wolf|Evaleen|Kaora|Rye|Atmosphere|Kayin|Khusavir|Thermo

Bump.
Information about the tail is in appearence at the bottom, and he has two new weaknesses.