Estelle. Daughter of Shaded and Soul.

Estelle. Daughter of Shaded and Soul.

Personal Info
Name: Estelle
Alias: Yet to be earned.
Age: Freshly hatched.
Gender: Female
Personality: Estelle, is a rather curious and cunning little hatchling. She considers herself as the bravest of all hatchlings and is extremely protective of them, which can lead to her being rather aggressive or unkind  towards stranger dragons. She does not particularly favour the presence of other dragons other than her family, hence her at sometimes cold-hearted actions.  Estelle has a big mouth and has the tendency to not think before she speaks. However, she has her days where she is rather benevolent, in her way, and days where she doesn’t care about anything, but of course her family. In general, she is a hatchling who adores her family yet not other dragons.
Interests: Hunting things down.
Her family.
Playing with her siblings.
Battling
Dislikes: Harm done to her siblings or parents.
Stranger dragons.
Overconfident dragons (Even if she is one herself)
Fears: Estelle fears harm done to her family, she loves her family to bits. Any harm done to them or if they’d disappear it could shatter her entirely and give herself the blame. She would rather die than allowing her siblings to be hurt.

General Appearance
Height: (Once fully grown) 66 Feet, Currently 6 feet.
Scales: Mixture of obsidian and charcoal coloured diamond shaped scales.
Eyes: Two discoloured eyes. One white the other a golden and red mix.
Appearance: Estelle is a rather long and elegant dragon with shorter legs and a thin body build. What she doesn’t have in leg length she has in tail length, similar to her neck and her wings, which are not the smallest so to say. She has four pair of waved horns on her skull that decrease in size along the sides of her head. She has several spikes, that similar to the horns above her head, decrease in size following down her neck, several more behind her wings following the end of her tail towards her tail tip, as also on her front elbows. The major difference between her and her parents is that where they have silvery scales she has very dark coloured scales and several silver streaks behind her front legs and neck. And finally she has a silvery white circle on her front head.

Skills and Abilities
Strengths: I think Estelle’s strength lies in her wings. She has rather big and long wings that enable her to fly long distance in a realistically short time flying at around  maximum of 50mph, and for mentally, she barely fears anything and if she does she rarely shows it as she has to be the strong one out of her siblings.
Special Abilities:  Estelle has her special ability mainly from her father, but where he has dark projections, she has white ones in form of souls. They cannot physically touch a dragon but they can mentally. This ability is a mixture between his mind rage ability and the projections. Currently she can summon a maximum of two soul like projections that can influence another dragons mind, they do this by somewhat entering the victims mind and begin talking to him/her for several seconds or minutes, the voices are simple whispers but can influence the mind greatly in ways of perhaps hypnotising one very weakly or change their opinion of something. She can do this for a maximum of two minutes still being a hatchling. To be able to do this she has to concentrate very hard on them. However when she reaches adulthood she can summon a maximum of 5 maybe 6 projections that can last up to 25 minutes. These projections  are very energy consuming, so assuming she has her two projections summoned and has them out for a good 2 minutes, they drain her of more than half of her energy. These projections can extend to a maximum of five metres now at her age, once older they can reach up to twenty four metres.
Weaknesses: Estelle’s greatest weakness is her family, as mentioned earlier she would rather die than allowing any of them to get harmed. Another weakness is the fact that her projections drain her very quickly of quite the amount of energy. Loss of energy can result to headaches, muscle weakness, and in the worst case unconsciousness. Furthermore when she has them summoned and in use she has to concentrate greatly on them, meaning she could result in being a easy target.
Combat Style: Currently, stand and fight. When she is older she prefers to use words rather than actually actions, this can include using mental communication through her little projections. If in need of actually battling she is very agile and likes to use her tail and wings to either flee or knock the opponent down. 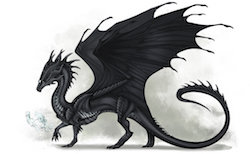 In strengths, need to verify the speed, as going long distances in short time is both saying fast and high endurance. So how fast can they go in a certain distance?

For special abilities, what is the range of this ability? Can they do this across the continent, 5 meters, what? Just give a range to this ability.