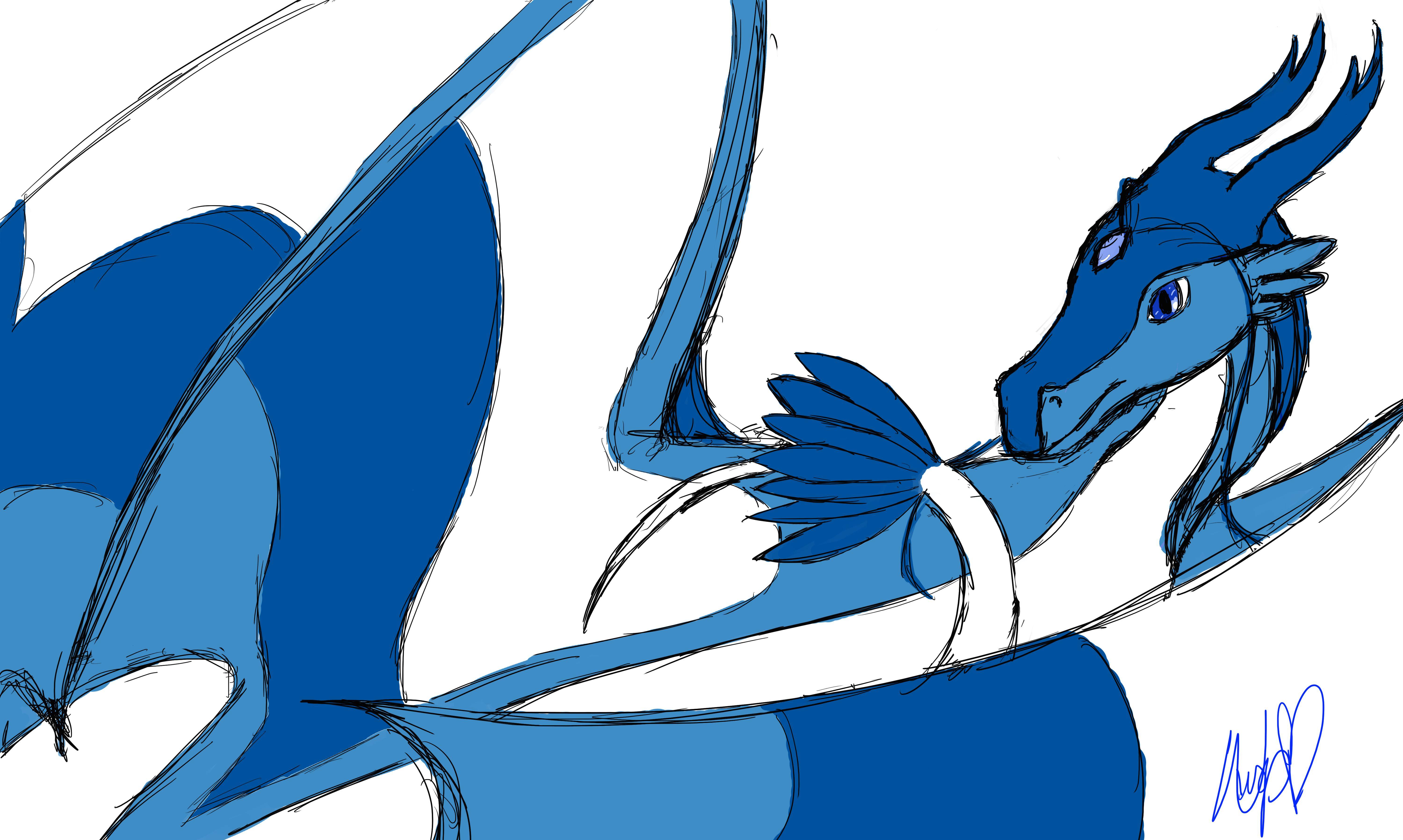 Personal Info
Name: Asailia
Alias: The Nautical Flower
Age: 60
Gender: Female
Sexuality: Heterosexual
Personality: Asailia is a being that focuses on kindness and happiness rather than achievement. She's that introverted "Mom Friend" that wants everybody to be save and happy. Partially it's because it's good for you, and partially because what's good for you is good for her. She feels all that others feel, sometimes as her own emotions, so she works very hard to create a calm, happy, and loving environment around her that will keep her mind in working order. This does not mean that she doesn't truly care about the feelings of those around her; it's impossible for her not to. She does love to help, and see that she's fixed something for someone. But she also feels that she cannot perform her best if she doesn't attempt to fix negative emotions swirling around her, and so that motivates her goals in this. As such, she's a very friendly dragon, open to making friends and speaking to others at any time. At the same time, however, she is an introvert, which leaves her withholding more information than she might give out, especially if she feels the one who is being given the information might not understand it properly.
This does not mean she can't be sad, or angry, or frustrated. She can feel these on her own, though often, she finds it hard to fix these emotions, and it's during these occasions that she tends to seclude herself until she can figure out how to deal with them and/or act on them. This includes emotions that are happy, but simply very strong, to the point where she feels pressured by them.
As a last point, she is also very stubborn. Once she's set one something, she's going to get it done, no matter what sort of obstacle gets in her way.
Interests:
Swimming with Fish: She likes swimming with sea creatures, may it be in her dragon form or her water one. They're fascinating to her, especially the way that they move, which is so different from the way many dragons move in the water, but also similar.
Happiness: Happiness is the one emotion that everybody feels, and that, even if she catches it from you, it doesn't bother her. After all, happiness feels good.
Learning: She does love learning new things, especially when those new things are something useful, such as how to open a specific shell without breaking it.
Helping Others: One of the things she's the most fond of is happiness, and so, when she helps somebody, she gets her reward in their happiness, and that makes her happy.
Shrimp: It's her favorite food, though they aren't very filling. The shells have never bothered her either.
Dislikes:
Eating Eel: Everything about them, from their taste to their texture, is just completely repulsive in Asailia's opinion.
Fighting: She dislikes fighting, and tries to avoid it if at all possible. To her, it's a useless way to solve problems, because, even if there is a winner, nobody truly wins.
Overly Confrontational Dragons: Dragons that feel the need to argue about everything tend to irritate her, as she feels their anger and irritation whenever she's around them, like a thorn in her side. So she stays away from them.
Fears:
Losing Control: She fears losing control in face of the myriad of emotions she experiences from those around her, as well as losing control while she's in her water form, and dissipating into the ocean, never to be seen again.
Huge Creatures: Their emotions tend to be too much for her, and so she fears the risk they pose to both her and those around her.

General Appearance
Height: 23 feet
Scales: Her scales are very small, interlocked in a way that they seem nearly invisible, much like a snake's skin. Asailia is primarily white, light blue, and dark blue, her colors clothing her in layers. Her back, spines, horns, and petal spines are all a dark blue, though the color itself tends to run from her nose in a thick line down her back to about halfway down her tail. The light blue lays below that, extending to about halfway down herside, and following the darkblue in it's pattern, taking up the rest of her face and continuing down until just past the dark blue on the tail. The rest of her body is white, excluding the wings. Her wings are rimmed with light blue along the top and base. However, the rest is layered just like the rest of the body, starting with white, and changing shade from dark blue in the middle to light blue at the tips.
Eyes: Light blue
Appearance: Fit with the body of what mythology states as a 'western' dragon, Asailia is a quadruped with large wings. The base of these wings extend from their 'arms' down to near where her tail begins, made to support her entire body in flight. Her back and much of her tail carries fins, beginning as one large fin spanning her back and splitting into two along her tail. Her paws are similar to a lions, the front ones sporting slightly longer toes than those of the back feet. Her head sports horns that are similar to a deer's antlers, though they rear back rather than to the sides, and only split into two spines, rather than the 6 some stags may have. Three soft, horn-like protrusions come out of each side of her head, back near the end of her jaw. On her forehead lays a large, rounded jewel, the same shade of blue that colors her eyes. From the top of this sprouts two long, antennae-like strands that tend to fall down her neck. This structure is the main home of her empathetic abilities. Her tail is the same length as her body, fitted with the formerly stated fins as well as the thing that earned her her nickname, what she calls the petal spines. They are a series of long, thin spines, almost shaped like a sharpened leaf. They can move in many directions, from straight out, to laying down flat, to alternating, or in two circles splayed outward on each side of her tail, much like two flowers. The latter position is the one she tends to leave them in the most of the time.

Skills and Abilities
Strengths:
Agile: She's quite quick and nimble, rather than leaning towards the strength side of the spectrum, she focuses on speed, and ability to dodge easily.
Evasive: Her agility lends into her evasiveness, as well as her water ability. Both give her a good tendency to dodge attacks and run away rather than fight.
Understanding: Her empathetic ability lends her a good understanding of other dragons, and how they tick from the emotions they feel while she's around them.
Special Abilities:
Empathy: Asailia feels the emotions of all beings around her. The intensity depends on her emotional closeness to the other being, as well as it's size. For example, if she were close friends with a humanoid creature, she'd still only feel their emotions about as well as every other dragon around her.
Hydromutation: This is the ability to dissolve completely into water. She can still move and think in her water form, and may draw herself back up and change back into a dragon at any time.
Weaknesses:
IceWings: IceWings can attack her even in her water form by simply freezing her, and leaving her unable to change back into herself. It's something she's not fond of the thought of, mostly because it leaves her easily captured.
Empathy: Large creatures, ones spans larger than she, can influence her to the point where she can believe the feelings are her own. Thus, she tends to avoid EarthWings, and even if she goes near them, she makes sure they're calm first. As well as this, areas with a large amount of emotion, such as a dining hall, can clutter her mind with different emotions, and distract her at times.
Combat Style: Asailia, in a word, is more of a pacifist. She prefers not to fight. However, when she is pushed into a situation where she is forced to fight, she tends to use her tail's spines and her teeth to the most advantage, simply slashing and biting. If there's water nearby that she can disappear into, much of her tactics will dissolve into guerrilla warfare, staying hidden until the target is close enough that she can attack and disappear once more.

Background
History: Will edit in later
RP Sample: (This is Asailia, obvi. But at the same time, my first RP sample still remains with Wisp, where you may view if you wish.)

Completed, and a bump for Au to check.