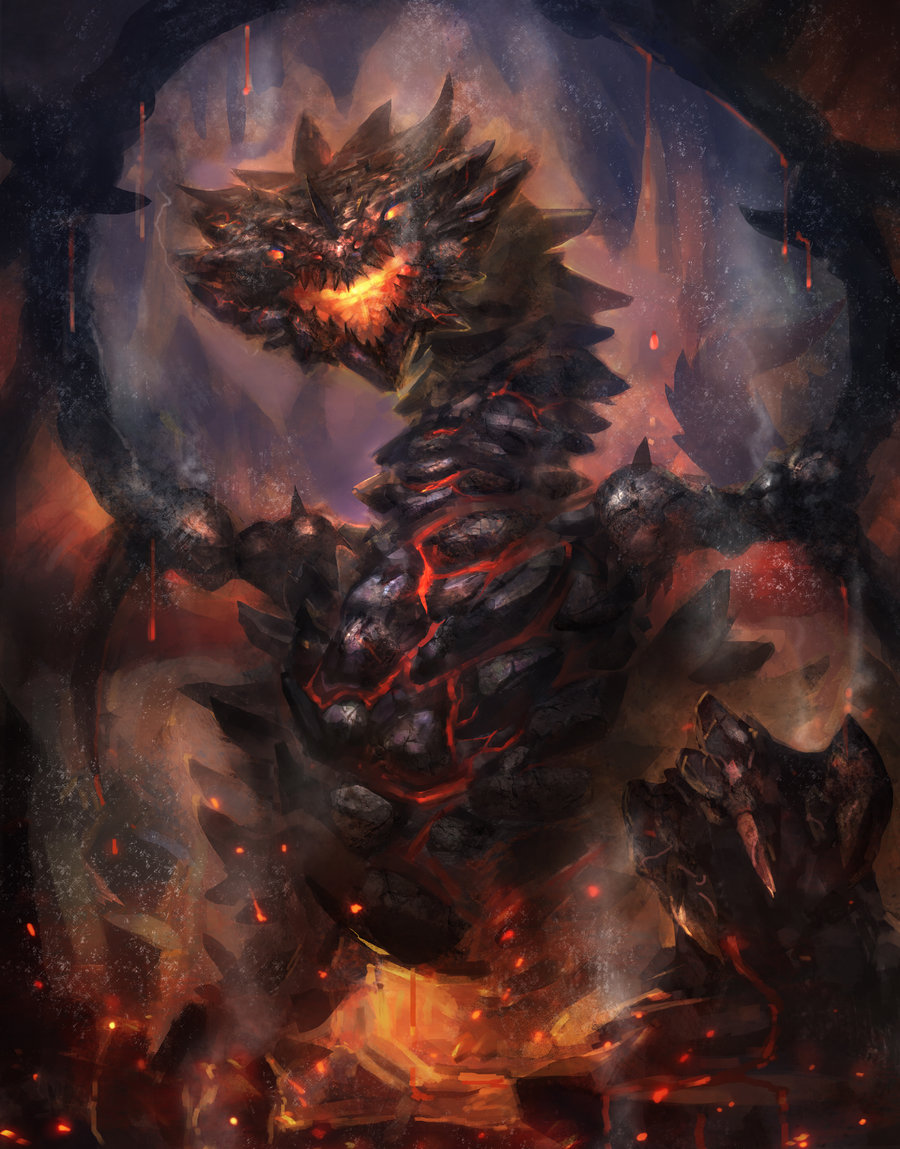 Personal Info
Name: Mahnirer
Alias: Magma Mountain
Age: 2000 in Humans year, around 66 in Dragon year
Gender: Male
Sexuality: Asexuality
Personality: Mahnirjer normally is patient and does not like to act first. He usually listen and observe before he moves. He is a very polite Dragon and because of that, he has very low tolerance to rude being (including his kins-dragon). He does not like to limit other's freedom because of his past. He also has a strong sense of righteous (with his standard) and he would proposal disagreement after he hears something wrong. Besides those, he does not fond of disrespect of authority.
Interests: Eating, Sleeping, Hunting humans
Dislikes: Seas, Lies, Humans, Nightwings (He thinks they are choatic, hard to handle and full of lies)
Fears: The Seas

General Appearance
Height: 160 feets
Scales: White and yellow (Before) / Black Rock and Molten (After he fusion with a volcano)
Eyes: Green (Before) / Burning Orange (After he fusion with a volcano)
Appearance: There is a thick layer of volcano rocks covering his whole body. Under the rocks, others can see through the gaps there is lava flowing between the layer and his scale. His head is a bit flat to compare with other dragons. His claws are big and black. His is a very bulky dragon with a pair of giant wings. (Like the picture)

Tribe Information and Status
Tribe: Firewings (Used to be Earthwings)
Inheritance: Mutated
Rank: Used to be Guardian, but he might need another trial
Family: Deceased
Mate: Deceased
Hatchlings: Unknown

Skills and Abilities
Strengths: Due to his size and body build, he has immense physical strength in ground and sky melee. The rock layer also provided him a perfect defend power. On the other hand, his mental strength is quite average to compare with other EarthWings
Special Abilities:
Regeneration: Mahnirjer has the ability to absorb mineral or soil to regenerate his body, but the process cannot be disturbed.
Heat Wave: As a EarthWing, Mahnirjer cannot breath out fire like FireWings, but he can release the heat under his rock layer and attack his foe with heat waves and steam.
Weaknesses: Large Amount of water, because of his lore reason, large amount of water could kill him.
Combat Style: Melee and heat attack on ground or in air.

Background
History:
Mahnirjer was a EarthWing which was kind and relatively non-hostile to human. However, one day, there was a human spell-caster, lure him on a volcano with lies. He aided the human out of curiosity and kindness but turns out it was a trap and they trapped him in the lava of the volcano. When the human left him die alone, he used his regenerate ability and attempted to absorb the volcano. After nearly a thousand of year, he finally absorbed the volcano and the lava. He breaks out from the dead volcano with his new form and now he plans to return home.

Mahnirjer opens his eyes, he cannot see the beautiful forest anymore, instead, burning lava fills his eye sockets and melts his eyeballs. He wants to shake his head but he can only feel the minerals are gathering around his neck and his skull. He tries to close his eyes again, all he can remember is how the human tricked him into the trap and how stupid he is. He mumbles curses toward the whole human race and slowly falls asleep.
A feeling of ground shaking wakes him up. He lifts his eye-lips and he see no more lava but an empty mountain. He stretches his limbs and his wings. His limbs and wings ramming the mountain, making the ground shakes terribly...


Suddenly... a huge cracking nose passing from the deep mountains. The people from the nearest village raises their head, looks up into the sky. They can only hear a dragon's roar and a giant dark shadow lands on their head before their flesh, bones and guts being boiled and burns by a heat wave. 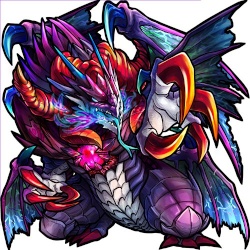 So there are a couple of problems with this app. First, the maximum height for EarthWing's is 160ft, so you'll need to fix that. Also, if fusing with a volcano is not a special ability, there is no need to have two separate appearances and heights for your Dragon. Your ability, heat wave, seems more like a FireWing ability than an EarthWings. Given the fact that he underwent a transformation in his history, perhaps it would be a good idea to make him half FireWing instead of a pureblood EarthWing. This way, you can keep the heat wave ability. In your inheritance, you can state he was born pure EarthWing but became a hybrid as a result of become trapped within a volcano.

Thanks for the advice, shall I edit the OG or make a new app?

Thanks, I amended his tribe, his height and his inheritance

May I ask is my app approved and I can start RP?

Apologies, I'm afraid you'll have to redo some aspects of your character. Your Dragon cannot fuse with a volcano, and would not survive having magma running through it, much less the process that led to it. Also, you cannot become a hybrid through mutation, only through birth. You would not be able fly given you are covered in rocks and are very bulky. So you will have to remove these things and your history.

Okay, I will make another character. Thanks.

You don't have to make a whole new one, just change the things I mentioned above.

I think it would be better for me to redo the character if the main feature needs to redo.

Haha, thanks. But the new character has nothing to do with fire :3