Personal Info
Name: Nerissa Morwenna (Sea nymph and Waves of the Sea)
Alias: Ara- brings rain.
Age: 240 Years
Gender:  Female
Personality: Ara, as everyone has the habit of calling her, is generally a dragon that acts depending on the situation. She has seen many things during her life, and acts upon such. She has control over her facial expressions and knows how to use words in order to trick or calm others. Even if she may not be the youngest anymore, her not too tall body is still full of energy and motivation, she usually is no shy dragon and does not mind socialising, however, there are days she does not talk nor give any attention to anyone. When necessary she can be cruel and cold-hearted, mercy is something she does not show if the law is involved. She protects those of her kin until death, as she has sworn when made Guardian. Since then she followed one motto, and one motto only 'Sed lex dura lex’ “The law is hard, but it is the law”.
Generally, she is a stubborn yet friendly, socially active, and at times cruel dragon that has the habit of being sarcastic towards everyone and enjoys a good battle with whoever needs to be hit hard on their head.
Interests:
A good battle.
Protecting others.
Her king.
Having a good flirt.
Dislikes: Firewings- way too stubborn and hotheaded.
Extremely kind dragons, or others that are too energetic.
Fears: Being along for eternity, or as long as she lives. She is afraid of never having a mate or hatchlings for it is one of her deepest desires, but once she has them she is afraid of loosing them.

General Appearance
Height: 50 Feet
Scales: Thin, yet strong and bendable. Triangle shaped spreading across her whole body.
Eyes: Mixture between orange and black
Appearance: Ara is quite attractive in appearance. She has a long and slender body with a even longer strong tail and four muscular legs. She has two large wings with large fins underneath, that can spread out to aid her fly or swim faster and give her stability. She has a orange dipped fin that follows from her head towards the start of her back loins and a larger one that spreads along her tail, mirrored by a fin like crown on her head that replace a normal dragons horns. Her body is covered with round orange patters.

Skills and Abilities
Strengths: Ara does know a few things and has experience many things during her 240 years, she has gained her tail strength through years and years of battling and swimming. Her paws are not the strongest for she does not use them very often except on land, where she is rarely. Therefore she can create a quick solution many problems.  She owns a long and strong tail she uses to transport herself faster in the air or within the ocean.
Special Abilities: Ara can solidify water by causing the loose molecules to come together, with the level of solidity going from loose jello to metal-like hardness to form a wall to protect her. This wall reaches just over her and has a bend in it so it forms a somehow semi-circle. This can not ben considered as ice, for ice is cold. The solidified water stays the temperature it was before. The strength of the solid water can be controlled by her and it only stays solidified as long as she is concentrating on it, once her concentration weakens the water returns to it liquid form. Her concentration can be broken by simple things that can make her think of other things. For example a flash of light might surprise her, this would cause a moment of weakened concentration. If the water is in it's strongest and hardest from nothing can go through it, however this can last a few minutes. She can do this a maximum of two times in twenty minutes.
Weaknesses: As many other SW she can easily burned by fire, and where normal water evaporates underneath the heat of fire so does the solidified water, however it takes several seconds longer. In moments where she is solidifying water to it's hardest form and her concentration is purely on doing that then she is an easy target because she does not realise changes in her environment. Are does not have any long ranged attacks, therefore she has to be close to someone in battle.
Combat Style: Ara makes use of her knowledge and environment and is rather fast for a seawing due to her strong and longer tail and has a large amount of stamina. Therefore she prefers to tire the opponent then attack, however she does not mind physical combat.

Background
History: Lived a happy life with her parents, however one day she’d cause herself a head injury and does not remember them or if she ever had any siblings.
RP Sample: Dis is Delillah) 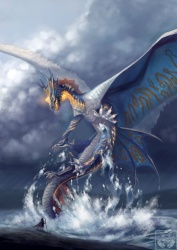 Hello Nerissa!! And welcome to DRF! I'd first like to welcome you to this awesome site, and that we all hope you have a great time here. Hopefully you are able to start rping with us soon!!

There's just a few things which need to be fixed up first before you can get started.

Nerissa Morwenna wrote:Strengths: Ara does know a few things and has experience many things during her 240 years.

Did she only gain quick thinking and a sturdy tail from this? Why didn't she gain physical strength from this as well with her paws? (This is just something to consider, you do not need to change it)

Nerissa Morwenna wrote:The strength of the solid water can be controlled by her and it only stays solidified as long as she is concentrating on it, once her concentration weakens the water returns to it liquid form.

Nerissa Morwenna wrote:At times she can rather straightforward and at some occasions where her mental state is not 100% she does not consider possible dangers around her.

I'd also like you to just explain what you mean, because just before you told me that she was a quick thinker. Being a quick thinker, being straight forward isn't really a weakness as it is countered by being quick to think.
I would also like you to know that her mental state isn't exactly a weakness either as any dragon can slip into this state for a few moments in a battle.

One more thing to change!

Nerissa Morwenna wrote: If the water is in it's strongest and hardest from nothing can go through it, however this can last a few minutes. She can do this a maximum of four times in twenty minutes.

I need you to reduce the time this can last for. Because you can basically form a physical, impenetrable wall, close your eyes, block your ears and nothing can distract you. Due to when it is formed and instantly protected, you need to specify the exact time this lasts for.
Also specify where the wall forms, if its all around her in a bubble, or a straight wall in front of her.