Insert Image Here
Personal Info
Name: Allucinora
Alias: Illusion, Nori
Age: 27
Gender: Female
Sexuality: Straight
Personality: Allucinora is a outgoing dragon, she loves chatter and is happy most of the time. When someone's down, she'll try anything to cheer them up. She loves to have fun; sitting around is NOT for her. She always wants to try new things, discover the world, explore. She's never backed down from a challenge, and she's always plodded straight ahead. Being around those from different tribes she doesn't know, she tends to fret, thinking they'd lash out at her, attack her. Even though she thinks others will attack her, it never bothered her to walk into a crowd of strangers, since she's always a daring one. She's extremely hard to agitate, and most of the time she'll shrug off an insult or reply to it cleverly, embarrassing whoever said the insult.
Interests:
~ Playing around with illusions, finding new tricks and playing with light
~ Trying new things! Challenge herself, discover something new in the process
~ Learning new things! The world is like an adventure for her, many things lie on the road to success!
~ Fighting, either practice or for real
~ Socializing! Almost always in a good mood
Dislikes:
~ Rude dragons, showoffs, scaredy-cats
~ Dragons who always say "No" "I don't know" "It's too hard"
~ Couch potatoes
Fears: Allucinora is afraid of loosing her most loved ones, and also afraid of being limited and not being allowed to do something (caged/etc).

General Appearance
Height: 50 ft
Scales: Her scales are shaped like perfectly formed rhombuses, around 5 centimeters thick, perfect for defense. The center is the color of moonlight and on the edges black or gray. Her scales are tightly put together.
Eyes: Her eyes are the color of cold ice.
Appearance: Allucinora has four claws on each paw, and on the front paws she has a pair of opposable claws. Her claws are extremely sharp, as hard as diamond, and the color of the night, deep black. She has two horns that twist tightly upwards, that are dark grey. She has a normal grey frill under each cheek, and a light grey crest that goes from between her horns to the tip of her tail where it ends in a few large, razor sharp leaf shaped scales. Her light grey wings have jagged edges, like rags and she has two black claws on each wing. Her wings are also very thick, she'll wrap them around herself for defense if needed to, though they will not hold forever. Her underside is slightly lighter than the rest of her body. A long scar could be seen on the right side of her tail, and another scar on the side of her left front leg. All her features (apart from the scars) will turn slightly blue if exposed to moonlight.

Skills and Abilities
Strengths: Allucinora is quite the attacker. She's learnt (by experimenting) where the paralyzing parts of the body are. She can aim a blow at a point where the opponent will loose control over one of their legs, tail, or a wing for up to 5 seconds. She's not easily distracted, though she never could focus forever on something. Really quick thinking and decision making during fighting is one of her abilities. She does not use magic during a fight as she believes it's useless.
Weaknesses: She's vurnable when creating a mirage, which takes her focus into making the mirage and not to what's actually happening. She dislikes being near hot places, natural mirages make her confused with her own mirages, temporarily distracting her from her opponent.
Special Abilities: She's known for her illusions, the ability to create multipules of herself, play with light. She can make up to four copies of herself. Her copies however, are significantly weaker than she is, and cannot attack but can move quicker than she can, darting in and out and making the enemy believe it's been hit. She can only hold the illusion for five minutes before having to rest fifteen minutes before using it again. Making copies of herself take up a lot of energy. Other than making her copies, she can also play with light, causing the target to get confused with the flickering lights, or hide herself in shadows in plain daylight. She can also create illusions of things (dragons, trees, flowers) within 50 meters. Creating illusions takes five seconds for her to create, and a lot of focus and energy, leaving her vurnable when creating a illusion.
Combat Style: She can play with light like the lightwings do, breath a beam of light though it only blinds the enemy. She can breath a mist like the Nightwings breath but it only dizzies the opponent, not make them fall asleep. Other than that, claws and quick thinking.

Background
History: Allucinora was a happy dragon, 5 years old, with her mother and father, until one day rogues attacked them in their cave. Her mother, being a scholar couldn't really do anything, so she was killed. Her father, fearing for her safety threw her out of the cave while her mother was being attacked to save her. Allucinora had tumbled down the rocks earning the scar she now has on her left front leg. From afar, she heard roars, slashes, clashes, and finally after the dreaded moment, the rogues left. Her cave was silent, and when she finally got back in, she found her mother and father both dead, murdered. She'd cried and cried, swearing that she'd make them proud even if they were in the spirit world. The rogues, probably alerted by her crying came flying back. Allucinora ran as fast as her legs could carry her, into the Nightwing marshes. The rogues caught up to her and threw her against a rock, biting down on her tail. Fearing this was to be the end of herself, Allucinora shut her eyes and calmed down, saying goodbye to the world only to feel the weight of the rogue knocked off of her by a shadow. She was still to afraid to open her eyes while the shadow picked her up and brought her to a group of Nightwings, where she still grew up and trained.
RP Sample: Creeping through the marshes, Allucinora silently took in the beauty of the dark, damp place. The crooked tree limbs hung over the water, and moss covered rocks poked their heads out over the water. Allucinora slid her way up a large tree, poked her head through the leaves and her face met sunshine. What a world this is, one side dark and the other side light. She thought. So peaceful. But will it stay this way? She didn't know. Her moment of tranquility was broken by the sound of something crashing through the undergrowth, snorting. Being a curious one, ALlucinora slid down the tree and dropped silently down onto the ground. A deer, of course. She let it go, for the love of life. She'd go tell her friend who was a tracker, to hunt it. She chuckled happily to herself and headed off towards the Nightwing palace. 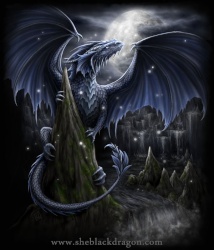 This looks good. The only thing you need to change is the fact that she can transport herself through her copies, as it is a form of teleportation, which is an ability only associated with the gods.

Welcome to DRF. I am one of the admins here and I will go through the things you need to consider in your app. So far its very good, with just a few things that I would need you to address.

Im not sure why there is a spot right under her hindleg that will make her blackout. Is there a reason for this? Otherwise it just seems very random. Its also very unlikely that someone can target that small spot as well.

Another issue is that you mention you create "mirages" or "illusions". These terms have different meanings, but even so, judging by the nature of your abilities, they should not be tangible at all. You stated they are weaker than yourself. Does that mean they are actually real? If so, then they are not illusions or mirages.