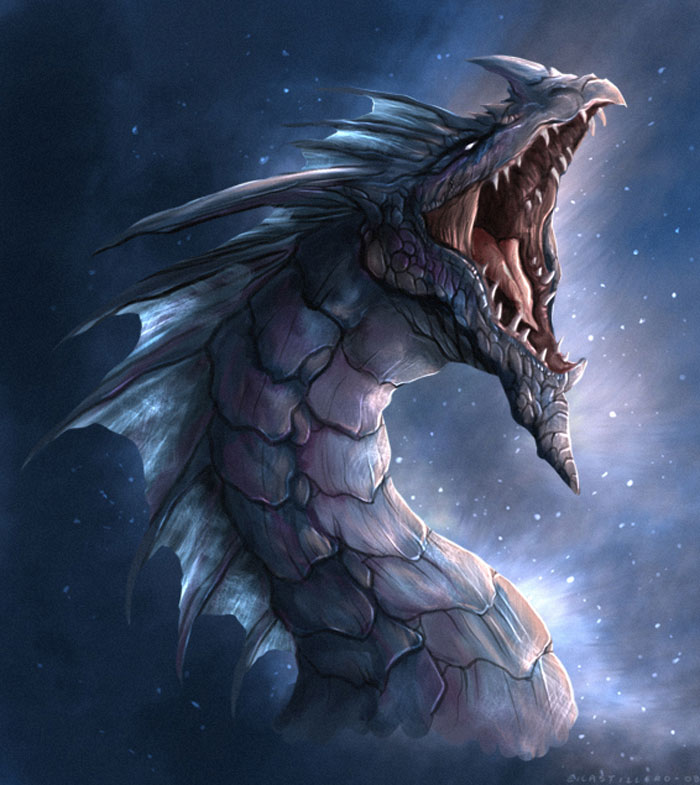 Personal Info
Name: Claudius
Alias: The Cunning Behemoth
Age: 2300~
Gender: Male
Sexuality: Heterosexual in youth, Asexual in his old age.
Personality: Claudius is a collected, quiet dragon. His many years have turned him from a brash, eager-to-fight youth into a calm, sage behemoth. He's much more likely to quietly assess any situation than most of his exceptional size. He's not quick to anger, but if you annoy him just enough, he'll start plotting your demise already. His cold attitude may prove to be an annoyance, as he's very rarely passionate about anything, including friendships. Even if you win his friendship, he won't show he cares easily, retaining his deathly neutral stare.
Interests: Reserved dining, solitary hunting trips, stories.
Dislikes: Rash and/or witless actions, socializing in large groups, pointless frolicking and overall playfulness.
Fears: Death – An ever-closer concept given his old age.
Deep oceans – What lurks below the surface?
Siege weaponry – Having lost two of his clutch-brothers to well-fired Ballista-shots, he steers clear of them by a wide margin.

General Appearance
Height: Slightly over 90 feet due to his mixed heritage.
Scales: A mixture of coal-grey and black, large scales waving over into each other covering a thick reptilian skin. Some scales are missing due to warfare in the past, others are split in two, others are simply scarred.
Eyes: Piercing azure
Appearance: Claudius is an aged dragon, grown to massive proportions. Most of his scales are a mixture of coal and black, yet his paws are a different hue, shifting into a dark bordeaux. A remainder of his heritage, one of his grandfathers having been a Firewing. This colour, along with his exceptional size, are the only visual reminders of this heritage.

On his back, along his spine, a diemetradon-like fin has grown all the way to his tail, reaching up to five feet in height around his back. Scales around its base have grown up to support it, so that it always shows his grandeur. He's able to flush blood into them, colouring them a dark red for intimidation.

Long, thick fangs are arranged in two rows in his mouth. Some have broken off due to age or combat, but there's still a massive amount left. A truly menacing sight within the dragon's maw, and if you're close enough to smell his foul breath, you likely won't get away.

Those are far from his only weapons though: His fierce talons have seen plenty of use in his younger years, but even now they are sharp enough to rake through trees. Many small spikes adorn his limbs.

A Titanium crest is fitted to his chest. It was sealed to the skin, hiding wounds that nearly killed him in the past. The wounds never healed properly, so the crest is much needed to stop his insides from becoming outsides.

Tribe Information and Status
Tribe: Nightwing
Inheritance: 75% Nightwing, 25% Firewing.
Rank: A Guardian of Shadow's Refuge, too stubborn to retire.
Family: All deceased, apart from some of his hatchlings.
Mate: Widower
Hatchlings: A bunch, most having grown up to be powerful dragons themselves. Though quite a few met their end in the fierce fights that were the nests.

Skills and Abilities
Strengths: Above all, he's very good at hiding his weaknesses. He has a strategic mind. Thinking before he acts. His sheer size and outlook are great at intimidation.
Special Abilities: Apart from the small visual cues, he has retained one other thing from his heritage: the Firewing's breath. Though it's not so much pure fire, rather lava that escapes his maw when he aims to injure. This special breath also allows him to create new, charred land, and he has in fact used it to turn a remote corner of the swamp into his personal abode, complete with a cavern he dug into the mountainside.
Weaknesses: Where his size is usually an advantage, it is also a weakness. Seeing as the Nightwing often rely on Stealth to attack their enemies, his inability to hide is quite the handicap.
Another weakness is obviously his age. As well as he hides it behind his imposing stature, he is getting old. Bones are turning brittle. Scales are showing signs of wear. His joints often crack when he makes sudden movements. His limbs are starting to feel tired under his heavy mass.
Combat Style: Withdrawn, defensive. He prefers to taunt his enemies to attack him, where he can await them with his brutal strength. The downside here is his intimidating presence – It is not always  easy to tempt others to attack him. If his enemies show a fear similar to this, he will impose his stature as large as he can, to use that fear against themselves, and march closer slowly with a deep rumble in his throat.
In either case, he'll mostly use his talons and fangs. He won't use his breath until he's either cornered or has his prey gripped tightly between his maws, as molten lava is a danger to himself just as well.

Background
History: Claudius was born, long ago, from a clutch of five eggs on the border of the marshes and the dry mountains to the east. From the very start, it was obvious he was the dominant one. Demanding all attention to himself, and using force to keep the other four at bay – It was clear he would carry on to be quite the menace.

True to this prediction, he quickly grew into a dangerous behemoth. Always one of the first dragons to attack enemies, humans and otherwise. He didn't always consider consequences: His main goals were slaughter, glory and conquest.

Of course this couldn't last.

In a brazen attack on a human encampment, Claudius lost two of his clutch brothers to ballistae. Seeing them fall down to the earth, pierced by multiple large shafts, sent him into a rage – He quickly turned three ballistae and the humans manning them into screaming heaps of molten flesh. But upon noticing the humans arming more of them – And barely dodging two shots – He turned and fled. Fear had replaced his anger.

From this day on, Claudius vowed to be more careful. More considering.
His hatred did not disappear – But his rash actions were replaced by cunning strategy.

In his older age, many centuries after he left the army, he became a Guardian of Shadow's Refuge. Even as old as he is now, he still wants to do a service to the tribe.

RP Sample: Claudius exited his cavern, walking onto the dry wasteland he created on the corner of the swamp. He groaned as he stretches his limbs. A few joints cracked, and a grin of relief crossed his features. “Ahh. I should really make the cavern bigger...” he said to himself, looking back. The cavern had suited his needs for millenia, but in his old age he was finding it harder and harder to curl up like he used to. He shook his head, smoke escaping his maw. With a powerful thrust of his hind legs, he sent himself up into the sky. His black wings beating in force to carry him up to the clouds above. He sped up, looking down towards the murky mires, spotting his kinsmen starting their daily routines. He nodded to himself, then made his way towards his destination of the day: His firstborn's own caverns.

Author's notes:
I tried my very best to keep it balanced. His powerful outlook yet frail flesh and bones below it. A male past his prime, refusing to show it. If you think, however, that I'm still going over the top, I'm open to discussion.
The background is short for now, but is intended to grow as the character develops.

Re: Claudius, the Cunning Behemoth