Time changes? (Open for all)

Time changes? (Open for all)

Another rainfull day, grey clouds covering the skies, and small glimmering from lightning would be seen here and there between the skies. Clearly gathering for an incomming storm. Mudd everywhere, making deep footprints for everyone walking on the earth.

Cailira's footprints would be very visible in the swamped area as she'd walk on her all four paws, head and neck moved forward and down, almost reaching the mudd. Wings hanging along her side, dragging them over the mudd aswell. Not really carying if anyone follows her, why should they?

She were growing tired of her siblings constantly mockering, bullying her for being the smallest. And as she'd walk around in her own world, she had not seen where she were going, to the boarders of the nightwings territory she reached. Only there she'd move her head slightly up to look about. Being on guard. Her eyes peering around herself for the time being before she'd lay herself near a tree, watching the other side of the boarders, not daring to cross it, for now.
_______________________

*i get up and look at the new dragon* no i will not be sparing you to day* i give him a dead eye look trying to tell not to push it and if he did he would not like it* do you have a problem with that.

would keep herself backing off, growling low to the still newarrived dragon, who clearly seeks a fight. Her tail moving abit from side to side, as the spikes along the back of her neck moves up, trying to show how dangerous she is.
However her size would not make her special intimidating, her wings spread out trying to show how big she is.

Her yellow eyes locked on the new arrival, and her claws digged into the mudd, ready to charge if needed. Her right front paw being placed forward mudd all up along her leg now, and the rain washing over her body.

Once more the sky would be lighted up by a striking lightning, not far from them, and the thunder would be heard no less then a second afterwards. Her body being slightly lowered and the shoulderbones moved up to show she's ready, if he'd attack her.

I few around the nightwing territory to try and find Ender, but walked into a even bigger adventure then i expected from finding Alys with two other dragons. "Well, this is going to get interesting. I wonder what you are doing here Alys." I asked him as i walked into view of the group, hoping that this won't turn this peaceful thing into a battle. Nothing i would ever want, especially close to Nightwing territory and all of them attacking us.
_______________________
I have no theme yet.
Alts: Enderand Darkn

he is wanting to fight me and im not in the .mood for it and i have a big feeling i dont like him.*jack pull he bag over to himself and he start to go thru it looking for something. not finding it in time he start to pull things out like armor ,gems, food after looking for a few sec later jack pull out a water canteen setting it down he pot everything back in his bags*

(This is Alyas, just too lazy to switch accounts

. Also, Draco, no one's supposed to know that Alyas is called Alyas as he always gives them his fake name, Agamenon)

Alyas let out a sigh of annoyance when the FireWing refused his sparring "invitation". In his mind, he thought to himself, "Coward," while glaring at the Jack. Just as he was about to make a mocking remark on the dragon's refusal, Draco landed. A grin appeared on his face, forgetting his irritation at Jack Fire's refusal.

"Impeccable timing, Draco. I was just here looking for a good spar, however these dragons don't seem to be interested in one. You won't mind, will you, Draco?" he asked, in a sickeningly sweet voice that would make your skin crawl. It was quite obvious that he was trying to force someone into a spar, though it didn't seem like Alyas would be getting what he wanted any time soon.
_______________________
"Never bother with those who can't understand, they're just stuck-up, uncivilized folks" 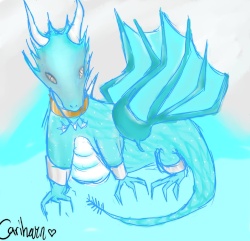 Caili would still be backing off, with her body lowered and growling from deep in her stomach, clearly seeing this person as a trouble-maker. This new dragon who wanted to fight, her tail moving slightly from side to side. Ready should it be.

Her eyes now landing on the third drake arriving to the place, how unlucky could she be? Another. She'd start moving her body to walk along the invisible line that lays the boarder between the two territories.

"If you search for a fight, take it elsewhere! we are not in-..interrested in your foolish games" she'd hiss the words out. Her spikes still being pushed slightly upwards showing her hostility towards Alyas.

Her gaze quickly locks on the new arrival, studying him, only to turn her gaze back to the other. Right now, Jack seems like no threat to her at all.
'What an arrogant idiot, comming here to search a fight among his own kind.. why can't he find a fight at his own home instead of bothering us?' was her thoughts.

tell me Alyas why do you want to fight us it does not see smart to do? *jack opens up his water canteen and set it out to collect the rainwater he sit it in the grownd*

Alyas looked at Jack and Cailira with a dubious look, it appeared these dragons weren't of the fighting sort and he was annoyed. Wasn't it in the blood of all dragons to desire a fight with another? It was after all, a rather straight-forward way of testing another's skills in battle. For him though, it wasn't just a test, it was a showdown of strength, wit and endurance. A way for him to feel more superior.

"Aren't you dragons? Shouldn't you be looking forward to spars? Where is your dignity? The confidence to display your strength and power? Unless..." he trailed off, studying the two dragons carefully. They didn't look like fighters from their build, nor do they seem like they serve a queen or king. With an irritated scowl, he realised he had wasted his time with citizens of the peaceful sort.
"Citizens, huh. How bothersome," he spat those words out and turned to leave, flying off to find, perhaps another way to amuse himself. 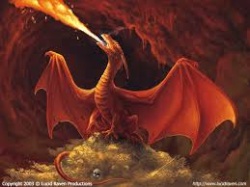 Claudius flew over the swamplands, when he spotted the gigantic red fly off. Raising a brow, he went to investigate the spot the larger dragon just departed. He circled around the spot, noticing two red dragons inside their borders, along with a smaller citizen. To him, this seemed like bad news. He roared loudly, announcing his arrival. He bent his head down and soared downwards, turning to land with his hind legs first. With a load thump he landed in the muddy marshlands, his bordeaux paws sinking deep into the dirt. He turned swiftly, raising his imposing stature towards the others.

"Are these two harrassing you, citizen?" He asked, his deep voice rumbling throughout the marshes. He may have been part Firewing, but his loyalty laid, and lies, with the Nightwing-tribe. His piercing azure stare remained on the Firewings.
_______________________
Claudius' bio

"The future is an open book. I won't be there to see it, but try not to fill it with stupidity." 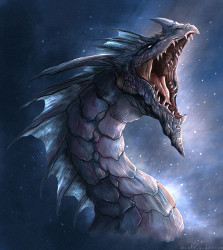 well he was a something else *jack turned his head to the new arrival* greetings my name is jack *his voice taking a hard but respectful tone toward the new dragon* i mean no harm toward you or her. *jack get up ready to fly away if he needed to not wanting to start a war*

//Welp, instead of Cari, I decided to throw Kenshin into this

Kenshin did not know why in the world had he ended up near NightWing territory. Maybe it was from pure wandering around? He did not know, nor did he want to take the effort to recall the reasons of his wandering. He was about to turn around when he heard voices, other dragons were nearby and he became somewhat interested and walked towards the voices.

Upon arrival, he spotted a couple NightWings and a couple FireWings. "What a strange sight..." he thought to himself and approached the bunch slowly.
"Hello, what is going on?" he asked with a somewhat friendly smile.
_______________________
"I do not care for you, but I do care for you. Confused? Me too," - Kenshin
"Me? Suffer? Oh, sweetheart, you will be the one suffering~ - Mahwus 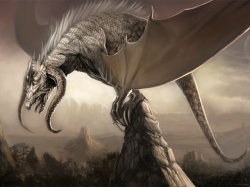 Similar topics
» In time they shall learn (open for all)
» Time For Learning! (Open!)
» Lost in Time (Open to All)
» Time Refugee [Open to All]
» For Time Ever Lasting (Open All - Outsiders welcome)