Back from the Dead!

Back from the Dead!

The air in the Fire-wing territory was still, the occasional sound of bubbles sounded out from the sea of embers, glowing dots of flame wafted by as the occasional gust of wind spun the embers through the air. Slowly however near the small cliff that reigned high above most dragons the air spun and twisted as reality seemed to crack and sparkle in a tense struggle to hold itself together. Shafts of light emerging from the other side of the strange shape in resemblance of a large arch, the air crackled much more fearselly now and flames suddenly emerged from the center of the white mass. The air tensed before suddenly the white mass turned to a wall of flame and ejected itself from the arch and out across the vast expanse of forest, the heat rivaling even the sea of embers if only for a moment.

The flames died as they receded and a deafening roar sounded out as a dragon leaped from within the flames, its form at first sight looked bloody as it spun through the air and pulled up just in time to miss the other side of the narrow canyon. the amount of energy it took however to cross from one world to the next was eminence and there was another roar as the dragon faltered in its wing beats and fell from the sky.

the landing was less than perfect as wing turned over paw. it was on the last roll the dragons paw slapped down onto the ground, dark claws gripping quickly and two deep hazel eyes stared at its surroundings ready to pounce and attack the nearest threat with whatever flame it still had left in its fire glands. A deep voice rumbled like stones rolling in a barrel as it looked at its soundings. This dragon had many forms, one small and playful, the other fleshy and with two legs and two arms. This form what many called an extinct race called the Jaden was strong, stronger than many in the worlds it had visited before this but it did not attack without provocation. a dragons pride was not to be taken lightly. 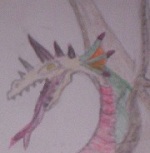 ((Hi BloodRedDragon and welcome to DRF's community! Before you are able to roleplay, which by the looks of this it is, you have to make a character app first! To do that, follow this link to go to the template. Once there, copy the template from the box and make a topic for your dragon here. Once you've done that all you need is to wait for admin approval. If you have any questions, don't be afraid to PM and admin or mod, for they'd love to answer your questions. You can also poke into the chatbox and ask anything there, we love to help.
Hope to RP with you soon,
~Aero))
_______________________
Aero Dynamic|Dynamic Oreo|Wolf|Evaleen|Kaora|Rye|Atmosphere|Kayin|Khusavir|Thermo

sorry about that! its been a while since i was here about 2 years i think or more. things have changed XD! ok if you guys cant stand a half-human/dragon running around the site causing havoc and i posted here as you said!
Link!

Yeah, this site has changed a lot, and I've only been here a year! Now we'll just have to see what the admins say about your human/dragon. But, welcome back to the community. ^^
_______________________
Aero Dynamic|Dynamic Oreo|Wolf|Evaleen|Kaora|Rye|Atmosphere|Kayin|Khusavir|Thermo