(This is back dated to around March 30thish I thinkkkk)

Rii was busy working in the forges once again. Though she was about done with her work today. The slender woman had a brand new leather armor set studded with blue black obsidian to help increase it's defensive capabilities. The old set she had made for herself had quickly rotted away when she tested it's strength against and earthwing's acid. Rii, not happy with her work, then set to work trying to make another set of armor pieces for herself. However, this set of leather armor would be made out of multiple layers of large carnivore stomachs tanned appropriately to keep the stomach lining safe and increase it's acid resistance. She also crushed up crystal into sand and tried to add it to each layer of stomach lining in the armor using special sealant. The added crystal would again increase the armor's resistance to acid as well as help to strengthen it against attacks with claw and tooth.

She was just finishing the last piece of the armor set, which was the helm. Unlike most of the armor which was about 50% obsidian glass and 50% leather; the helm and gauntlets were made of tougher materials. Black titanium, mixed with black obsidian crushed to sand, and then with added slabs of black glass over top of everything. They had 70% metal (mixed with obsidian sand), 20% pure obsidian glass, and 10% leather mixture. The leather really wasn't needed for the helm and gauntlets because these pieces did not need to be flexible, but it made the pieces fit perfectly and feel comfortable. The rest of her armor had to have leather because Rii's body was too flexible for most full metal armors to work correctly with her. So the neck guard, chest plating, hip and tail guard were all made out of the 50/50 mixture of leather and glass.

Rii set the helm onto the table. While she was technically done with forging and it would work perfectly in combat, but Rii was vain. She would add pretty gems and embellishments like carving's or runes into the metal work. She could only do this with the helm and gauntlets though because they were the only pieces made with titanium metal. The rest of the leather armor she would just have to hope looked nice on her in the mirror later. Now she had to find some nice dark blue and green stones to make it look like a piece of art. She was thinking emeralds and sapphires would do nicely.

Wanting some air away form the forge, Rii grabbed the helm to take with her then headed out of the smokey area. Ash and cinders covered her pretty scales and fine fur making her look almost like a greyish black dragon instead of dark blue. She settled in the large cathedral-like area sitting on the edge of a clear spring in the middle of it. Then the she dragon began carving little swirls and triangular marks into the helm avoiding the more brittle obsidian.
_______________________
Rii's physical description here

Pyrrhus sat in the corner of the Earthwing Kingdom near a spring fed pond. He had come here to learn about crafting and building. He however... He was extremely out of place to say the least. Giant dragons and a tiny, tiny, reptilian working together... He'd never think he would see that day.

He looked up at a grey black-ish snake like dragon across the pond. They reminded him of Rii... But they couldn't be, Rii was green and blue. This dragon was clearly had Nightwing Heritage in them. They even had Rii's mane though... But they carried an armor piece, and last time he checked Rii didn't make armor... Especially that good.

The Reptilian debated going over and talking with them, but didn't as for the fact they could, and most likely would've killed him instantly. He stayed put, tossing small pebbles into the pond, looking up at the long Nightwing-ish snake dragon and her armor periodically.
_______________________
"People fear death even more than pain. It's strange that they fear death. Life hurts a lot more than death. At the point of death, the pain is over." 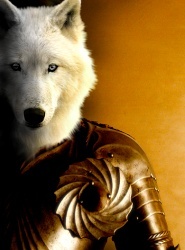 A few minutes went by of Rii simply carving into her helm deep in concentration. Only when a piece of ash fell into her eye bothering it did Rii look up and shake her head making a cloud of dust and cinders rise off of her head and neck. The shake didn't dislodge the piece form her eye though. Growling at the irritating piece Rii then turned her long head and neck and dumped her head into the pond shaking it within the water to get the muck out of her eyes.

Rii lifted her head back out of the water and shook herself once more spraying blackened water everywhere. Her head was mostly clean now, a part form bits of ash sticking to the tips of her blue fur. The womans neck only washed off about half way down from where she had stuck it into the water. Her scales, unlike her fur, actually came clean radiating a blue color only reflecting a bit of green in the dim lighting.

Then she looked back to her helm, nose and fur dripping with spring water, and began working on the designs upon the helm again never noticing her friend watching her nearby.
_______________________
Rii's physical description here

Pyrrhus looked up as the large dragon moved around. It cleaned itself off in the now soot filled gray pond. IT WAS RII! He stood up happily and was about to walk over till he got an idea. 'What if I quietly swamp across the pond and popped up in front of her...' He thought to himself.

Liking the idea he quietly went into the water, submerging himself fully and swimming under water. He stuck the tip of his nose out occasionally to get air, because he certainly wasn't a seawing. He hoped Rii didn't see him doing this, but figured if she didn't notice him over there he wouldn't notice him here.

He emerged from the water and sat down in front of the preoccupied dragoness, waiting for her to look down and see him sitting there. Hopefully she wouldn't freak out and drop the armor piece on him, because that would end up poorly for both.
_______________________
"People fear death even more than pain. It's strange that they fear death. Life hurts a lot more than death. At the point of death, the pain is over."

Rii continued scratching little swirls into her helmet occasionally stopping to pick it up bringing the helmet closer to her eye to view the most minute of details. Then she would bring it back down and continue working the metal. Because it was so strong her claws were very quickly becoming dull. Rii sighed knowing that she would have to go and get a diamond from her den soon if she wanted to continue scratching runes and flower like designs into the metal.

She didn't notice Pyrrhus at all until the smell of him crept into her nostrils through the smell of smoke. She blinked and looked up form the helmet to see the reptilian standing right in front of her. The dragon was so surprised she actually slipped backwards into the pond. Splashing water everywhere and dropping the helmet to the bottom of the spring. Growling at first Rii lifted herself back up as the ash began to drip off of her mixed with water. As she looked at Pyrrhus though Rii couldn't suppress some amusement flickering into her eyes and widening her muzzle into a smile..

Darn you Pyrrhus. Now I have to find where the helmet sunk to. she growled amused and annoyed at the same time. getting back onto the bank where the reptilian was Rii purposefully shook herself hard to spray him with as much water mixed ash from her body as she could.
_______________________
Rii's physical description here

Pyrrhus laughed as Rii was taken by surprise and fell into the pond. Although he didn't approve of the fact he now had to wash his fur because it took on a grey-ish look. He was already covered in water so him being wet he didn't really mind. However two can play at that game.

The Reptilian ran and jumped, hanging onto the long snake like dragon's snout. He then climbed onto the back of her head, Trying to get as much sooty water off him and onto her as he could. She said something about a helmet falling into the water, but it didn't concern him so it wasn't his problem.

He sat on her back, now bored after the excitement. He hadn't seen Rii in forever, it was a really happy day for him. He wondered what she'd been up to after so long.
_______________________
"People fear death even more than pain. It's strange that they fear death. Life hurts a lot more than death. At the point of death, the pain is over."

Rii snorted as Pyrrhus clung to her crawling up her snout and onto her head. She was tempted to dunk her head in the water again with Pyrrhus still clinging to her furry bluish black crown. However she decided not to since the guy felt a little fat and heavy making her worried that he might sink and drown in the pool due to his own heaviness.

When he dropped down to her back she then sighed and looked back into the water wondering where the helmet went. The water was not very clear after she had rinsed the soot off of her neck and head the first time. So she couldn't immediately see where the hunk of metal fell.

Sticking her head back into the water Rii let her tongue do the searching. Eventually it landed against a smooth rounded portion of the helmet alerting her of its location. Then she grabbed it with her jaws and lifted her head out of the water. A literal waterfall ran down her neck to her back where Pyrrhus was sitting as she lifted her head out of the water with the helmet in her mouth. Then she set it on the ground before her to let it dry in peace.

So how have you been my little friend? Rii asked Pyrrhus with a smirk knowing that she might have gotten him very wet a second ago.
_______________________
Rii's physical description here