Only a few weeks after the recent hatchlings where born into the world, Nebula decided to take them out of the cave to explore a little of the forest but keeping a close eye on them. As he got them all together he laid down in the grass watching the little ones. Wondering if Athena was going to be back anytime soon, knowing that she had gone out for a hunt, worrying about many things. Still he focused on them and spoke out softly "Go on guys.. explore a little" smiling as he carefully watched.
_______________________

She did her best to try and copy her mother. When she snapped at the air, the hatchling did the same, although not as audible as her mother's. Andromeda kept trying to head tackle her mother, going faster as the larger dragon continued to veer side to side and retaliating with a small nip on Andro's neck. It did not hurt, but it was more like a flick and a pinch on her scales. Andromeda flailed at that, the charring blood going everywhere, before attempting to bite her back in the leg.

Then her mother nipped her neck again. But this time she was holding on. What was she doing? Andromeda could not understand until her mother released her and she landed rather hard on her back. Starla was sitting next to Andromeda, and before Andromeda could respond, she found herself having to reach her claws up and clung against Athena. Left and right her wings beat, but still Andromeda held on. She would not be a coward and jump off. Rather, she wanted to prove her worth. Her claws held tight until her mother was off the ground and soared over the tree tops.

For a moment, Andromeda forgot about her will to fight. Sitting on the back of her mother felt weird, but the sight was something that... for some reason, felt familiar. Like it was some instinct of theirs to travel around like that. Andromeda looked down from over Athena's shoulder, seeing their huge shadow zipping past a blur of green. And then there were the plains.

Andromeda chirped and cooed at mother. She did not know what mother was saying to them, but Andromeda was not complaining.

Comet watched with facination as they flew holding on tightly eyes wide. It was breathtakeing how pretty everything was from the sky. He had never seen so much in his entire life in one single place! It definantly was something else.

Starla chirped happily when their mum dropped the formerly blood covered sister next to her. With a great effort, Starla nuzzled Andromeda gently, before almost collapsing on their mums back. Everything required great determination and effort from the small hatchling, but she didn't want it to hold her back from some thing. Starla, however, really did need to come to the realization that she would never be as strong as her siblings, as much as it pained her to think about.

Suddenly, they were taken straight up into the air and Starla almost lost her footing. Her small paws grasped their mothers back and she hugged her to try and stay firmly there. She slowly lifted herself, but the speeds that they were going almost threw her straight back off. She whimpered quietly, unable to see the views which the other hatchlings seemed to adore. Reluctantly, Starla returned her attention to the sky and the movements of her mothers wings due to her inability to see what all the adoration was about.

Starla watched as the small puffy clouds slowly drifted by, the sun shining down brightly against their scales. Not that she knew, but the dragons really did stand out over the green trees, and she quietly whimpered, resting her head on their mothers back. After hearing her question, Starla raised and tilted her head. She considered the question, before putting in a giant effort in to her next action. The little hatchling chirped in disappointment two (!) times to try and get her mother to understand that she couldn't see. 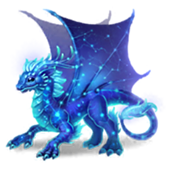