Soul was leaping from tree to tree getting as high as she could,. After a few long (and tiring) minuets she perched in the tallest tree. I'm gonna do it... I'm gonna fly. Soul spread her wings and jumped she glided for a few seconds and said "I'M DOING IT!! I'M FLYING" her shout of happiness were interrupted by her suddenly plummeting to the ground, she hit a tree and fell on you "Owww...." She whimpered and looked up at the dragon next to her "Sorry 'bout that..." she apolagized glumly
_______________________
~SOUL~
alt: Solaris

As the large firewing landed infront of him.Her voice full of anger and rage presumably due to me taking the small dragon away from her. She seemed to be trying to hide her rage but her body posture and eye movement gave it away.

"Shade this firewing seems to mean what she is saying and im always ready for a fight but we should back off." demon said in shades mind. "No way demon we can not back down," he said to him in his mind. Though shade wanted to yell at the firewing his shy attitude kept him back and demon could not come forth. "N-NO" he said as confident as he could to the firewing.

As Shade looked on to the great firewing he decided to awake the demon."Step back," he told the small dragon as he got ready and sprouted his tendrils."AWAKE NOW DEMON," he yelled ready to fight the large firewing if he must.

"Foolish NightWing... I, Queen Tempest, gave you a chance.." Tempest snarls, completely unfazed by the NightWings call to its apparent demon. Tempest dove up and spiralled down, breaking the contact that the SkyWing had with her as well as aiming for Shaded. Before she snapped completely, Tempest summoned and threw a Firelings towards him. She then allowed her internal anger to snap as she felt her familiar fire around her tail and wings internalise. Her scales hardened, forming almost like plates, her wings looked torn but were covered with clear membrane. Her chest covered with strong plates, but a lava like line ran down through it. Her eyes seemed to glow like the lava itself, spikes piercing through her one smooth hide, covering her in a layer of protection. Multiple horns protruded from her skull as she roars again, her maw glowing with fire.

She detonated her Fireling early so that the flames would block her movement. Breaking through the clouds of fire, a death defying roar escaped her muzzle, her hell claws ablaze as she tries to grab a hold onto the foolish NightWing, the one who dared to steal from her. The ones who assaulted and stole from her, who attacked the QUEEN of the FireWings...
_______________________

Demon Shade stared in excitement as he found out what this queen was." SO YoU ArE tHE QueEN A WorTHY FOE." he said as he ducked and dodged and jumped out of the way of the fireclaws. He then readied his many tendrils ready to attack the queen."Why ArE YoU EVen DoiNG THis YoU Act Like I Hurt Her," he replied. Even though he was ready to attack the firewing he couldnt help but wonder what was she trying to do."FiNE yoU WaNT HeR gO ON," demon shade said as he pushed soul he wanted to fight her he could not control the urge but decided no and backed off "ShADe CoMe BaCK," demon shade yelled as shade came back "happy queen," he said concerned why demon backed off as he had no control over his emotions and since he normally fought.

Tempest snarls, summoning all four of her creatures to her side. The fourth one summoned slightly later, their large forms watching them both closely. Tempest carefully approaches, her claws tearing through any of the tendrils which would have the guts to try and attack her. The firelings moved closer, and she held her paws out to the arrogant and rather silly NightWing. Her hell claws fizzled, their heat dying extremely quickly as she looks at him."Give her to me." she demanded one more time, more worried about the small dragon than if Shaded dared to try and attack her.

The firelings watched from their positions around the two of them, hissing soundlessly as they watched. Eerily, they hovered in place, not flapping their flaming wings as they watched them. Occasionally, they would seem to disappear into the sky, little flecks of fire in their place as they moved, slowly circling the pair.

Tempest looked at Soul, her eyes slowly releasing their anger, if he gave her over. "Return Soul to me." Tempest demanded once more, her paws staying there as she looked him in the eye. If he dared to attack her, she would use her Firelings to destroy him as she pried Soul away from him.
_______________________

"very well," he said as he motioned to soul to go to temp.''h-happy queen," he said as he watched the little dragon go towards the firewing. "It is for the best shade we cantt fight her yet in time my charge in time," demon thought to him. "very well demon," he thought back. He watched as the large firewing stared at him "w-well please put down your fire," he replied to the large dragon.

"Tempest he wasn't trying to hurt me," Soul looked at Shade with a look of gratitude before looking back at Tempest "He saved me. I was falling and he caught me."

Maivon's eyes widened as she realized that Tempest was not, in fact, trying to kill Soul, and that she had just made a mistake.
A huge one.
As Tempest tossed her aside, she hit the ground sith a dull thud. Her black and white scales were suffused with a red glow from the heat of Tempest's flames, but thanks to her FireWing heritage, she wasn't severely injured. Maivon hauled herself onto her feet with a groan. When she looked up, she was greeted with a horrifying sight: Tempest had changed into an entirely new, terrifying form. Maivon stood there, petrified. The Queen was focused on the NightWing, but she could easily turn around and focus on her... 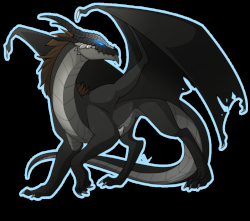 Posts : 11
Reputation : 0
Location : The black blur in the sky, speeding through the clouds.

The look of anger dispersed from her face, the firelings imploding as Tempest cut the connection thoughts off from them."I'm sorry little one.." Tempest quietly mumbled to them, nuzzling them as she held them in her strong paws. Slowly, the Queen started to calm herself, the normal black, yellow and red hide beginning to take over her form once again. Her non-damaging fire would return last, when she was completely under control of herself again. But she knew that she needed to hang on to Soul, otherwise she would snap once more.

She listened to their explanation, before snarling slightly. Maybe that NightWing is telling the truth.. Maybe he did actually help her.. Tempest though, reasoning to her rather unpredictable half. "My apologies..." Tempest spoke to the NightWing, a slight remorse in her voice, but she was still angry. She exhaled slowly, before a sudden flash of anger returned to her eyes. She turns her mighty gaze to the SkyWing below her. "May I inquire as to why you chose to attack me?" Tempest's voice boomed across the lands, here eyes looking down onto the SkyWing below her.
_______________________

Maivon cleared her throat and returned Queen Tempest's gaze, albeit a bit nervously. "Well, you see," she began, "from my point of view, it looked like... It looked like you were trying to kill Soul." Maivon was fairly certain the FireWing would exclaim about how she was in fact not trying to hurt Soul, but she continued. "I saw you hurl her into the air, and then I saw you fire your... Fire at Soul." The yound SkyWing then hung her head. "S-sorry... I realized you weren't trying to hurt Soul." Maivon figured Tempest would probably still be angry at her for attacking her like that, even after her apology. Honestly, I wouldn't blame her. I just hope she doesn't hurt me though... Maivon had a higher-than-average tolerance for flames, but after a short ammount of time she would surely be burned to a crisp if Tempest decided to engulf her in flames.

Posts : 11
Reputation : 0
Location : The black blur in the sky, speeding through the clouds.

So uhm... what now? Soul inquired. She was tired and had a headache so she was done with flying. Why done we find a nice tree to sleep in? sleep sounds nice... Soul yawned and she was already falling asleep.