Personal Info
Name: Niara, Nii, Nia
Alias: Yet to be earned
Age: 19
Gender: Female
Personality: Niara is genuinely a friendly dragoness with a tiny bit of a temper. She can be moody at times especially when she has’t fed on anything over a longer period of time. She is a natural swimmer but because of her ability to change her skin/scales she has the continuous desire to discover the land above the water, therefore she is rather social. Being the moody dragon she is she has the tendency to show other dragons the cold shoulder if they made her loose her temper, however, Niara has a strong longing for knowledge always wanting to know more about humans and therefore likes to spend her time around old human villages and ruins.
Interests:
Hatchlings
Myths and Legends
Traveling
Old human ruins
Dislikes:
Firewings
Birds
Aggressive Dragons
Fears: Well, Niara fears birds. She never knew why but since the she was a hatchling she feared them, whether big or small they’re all a no go for her, however she doesn’t fear birds smaller than a hawk. Birds of such size don’t fear her, but cause a feeling of uneasiness around her.

General Appearance
Height: 39 Feet.
Scales: Here is where it gets interesting. Nii has shape changing scales, but they Only change into two other form and these are feathers and fur . This happens when her body has dried. Her scales are rather big and thick, most are blue, turquoise or green. When they change to feathers and fur they are a light blue, creamy blue even.
Eyes: Blue
Appearance: Nia is a middle sized Seawing with thick plate scales all over her body. She wears fins on each side of her head, between her claws and between the spikes on her elbows and her back following down her spine. She also wears spikes down two sides of her tail until the tip of her tail, each spike is connected with a thin membrane, fin like.  Tiara carries two long horns on her head and two large wings at her side.

Skills and Abilities
Strengths: Nia uses her tail to move through the water therefore over time her tail has become quite strong, making her able to use her tail for powerful blows. She is a fast thinker but has the tendency to get confused quickly. While her journeys throughout the lands and oceans she has increased her stealth and speed making these an advantage in battle.
Special Abilities: Niara has the ability to change her body coverage from scales to feathers, this gives her the advantage to be able to walk on land, however, only for a period of time as she still requires water to survive. The amount of time on land depends on the air temperature and generally the weather around her, for example she could spend less time in the FW territory than in the IW territory.
Weaknesses: Once she is in her feather/fur form she is vulnerable to everything sharp as she has nothing protection her skin beneath the feathers and fur. When she is on land and she is in her other form she can only stay for so long in her form before requiring to return into the water as she still is a Seawing. Niara can be confused quickly as she excites on everything and everyone being the friendly dragon she is she prefers to see the kind side of other dragons, the downfall of such thinking is that she can realise threats too late.
Combat Style: She prefers to use stealth and speed to dodge most blows but once she sees an opportunity she will use her strength within her tail to hit the opponent with strong blows, aiming the head or legs to either knock out an opponent or throw him of his legs. 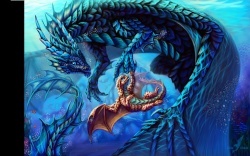