Not Getting Any Younger (Open To All!)

Not Getting Any Younger (Open To All!)

Zaroc chuckled as he watched a squirrel scamper up a tree. He had been sitting here for quire some time now. Meditating. A relaxing thing to do. It helps to.. Clear the mind, in a sense. Heal the soul. Lift the fog from any dark corners of your consciousness. Then, as Zaroc glanced down, he saw it. A tiny sapling, an oak by by the looks of it. That simple little seedling brought a smile onto the thirty year old male. "Hey there," he said softly, using a claw to take a better look. A healthy child. Lord. There was barely enough beauty for him nowadays, and the little things in life were getting to him more and more.

Zaroc, in his thirties and not getting any younger. No mate, no children. Just.. Him. In his own world, wanting nothing more then to serve his tribe as best he could. Back when he was younger,a fresh faced young drake with a handsome face, the females slid to the ground when he passed. But now, of course, he was nearing the prime age of fourty, and what female in their right mind would want a scroll studying, honour bound, rather boring male like him? Inward sigh.

Ah well, that didn't matter. Zaroc might be lonely, but at least he had his tribe. And his interests. And his meditation. So yes, life was good.

Diacalor was sniffing around for some silver, maybe some platinum if he was lucky, when he noticed an Icewing staring at a sapling. He scooted closer to him, out of reach, but still within eyesight.

"Whatcha doing over there? Gardening?"

A voice caused Zaroc to lift his mighty head. He chuckled at the younger male's question. "No, no, I'm just.. Appreciating life a little more," he replied, helping the sapling into a better position to grow with his huge claw. He then looked at the firewing. Hmm, he smelled of metal and steel. Perhaps a vulcan? Zaroc had a soft spot for vulcans, particularly for their skill in metalwork. Himself? He was better at woodwork, but he loved metalwork.

Diacalor looked up at the sky, seeing patterns that were foreign, but beautiful.

"If only you could see through my eyes right now."

He sat down and stared as the stars shifted from pattern to pattern in a hypnotic way. Despite all of the possibilities of the universe, Diacalor was happy to be where he was.

The stretch of underused muscles felt freeing to Aether as his large wings carried him on a warm current, high over a lush forrest. He really needed to fly more, it was becoming a bad habit that he remain grounded to patrol or hunt in his free time.

He scans the scenery below and let's out an appreciative hum, the moon's light was rather fierce this evening and it made the forrest sparkle in a magical sort of way. Deep jades and emerald greens seemed to reach out for him in invitation. He smiles inwardly, revelling in the knowledge that he himself must be a dazzling image as well; pearly scales glowing under the Moons cold rays of light.

Suddenly, in a gap of the sea of green, Aether spots a peculiar sight. Two dragons of contrasting colours, one staring at the sky and the other staring at the first, unmoving. How odd. He has half a mind to keep going for the betterment of his wings, yet he takes quick interest and decides to investigate.

Aether folds in his wings and begins to decend in a graceful arch, nose first towards the small clearing. Once close enough to be labeled 'a death-defying stunt' he opens his wings, stretching them wide to catch air and land rather gently on his feet.

"What are you doing?" He says incredulously once settled, cocking his head to the side. Weird dragons, you find them everywhere you go. 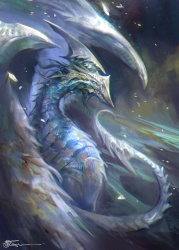 "Every dragon is weird in some way Aether, you just have to find the ones with your kind of weird."

Playing around with psychic abilities wasn't normally a thing Diacalor would do, but here was as good a place as any to do it. He stared deeper into the universe, drawing power from his invisible counterpart.