Personal Info
Name: Flames
Alias: God of Fire and Lava
Age: 34
Gender: Male
Sexuality: Bisexual
Personality: Flames is very Brave and wise, he talks sometimes but is very serious about his tribe, he will do whatever he can to protect his tribe and his friends. Flames is not scared of anything and will fight anyone who hurts him or his friends. Flames might be a bit old but he loves to make everyone feel happy. Flames is also very reliable. However Flames is usually not seen often, he usually only shows up if the Firewings need help in battle, Tempest (FW leader) calls for him or there is an event going on. Flames does prefer to be alone because it allows him to think more and gives him more time to get stronger, but he will sometimes go out if the day is nice and peaceful.
Interests:
-His Tribe/friends
-being alone
-Firewings following orders
-a peaceful day
-Volcanoes
Dislikes:
-Danger
-Firewings that don't follow their orders
-Dragons that want to bring down the firewings
Fears: Flames fears that his tribe will fall and never come back, and he and his tribe will be only a memory

General Appearance
Height: 120 feet
Scales: Flames has Red scales, an orange underbelly, Orange curled horns, orange spikes down his back, orange wings, and orange claws.
Eyes: Black
Appearance: Flames has spikes going down his back to protect his back from dragons, as well as a flame at the tip of his tail, Flames wears a black necklace and in the center of the necklace is a gold symbol with the silhouette of fire.

Skills and Abilities
Strengths: Flames is intelligent and is very skillful in combat, Flames always takes time to think. He will not hesitate to fight or back down from one.
Special Abilities: Flames can set his whole body on fire, (like that one dragon from How to train your dragon) he can also breathe fire, but if he wants he can shoot a ball of fire out of his mouth which if it lands on the ground will create a small pool of lava. Flames has full on fire manipulation, which means he can create fire and shape fire into small objects, nothing bigger than a 15 foot dragon. Flames also has the ability to control fire if there is fire burning something and he doesn't like it he can just simply put it out without going anywhere near it, by just using his powers to instantly put it out. He can also make anything's temperature rise by just walking in a room, say a room is cold like 10 degrees Celsius, but if he walks in the room it will be upped to 40 degrees Celsius, and he can just make things hot using the same power that allows him to put it out. He also has a breathe that allows him to breathe pools of lava instantly. Flames also has a magma mode which only occurs if he's angry, in this magma mode his body automatically gets surrounded by blue fire, this doesn't effect others, but it effects his abilities and makes them stronger, it also multiplies the average of a strength, defense and agility of a dragon by 3.
Weakness: Flames' weakness is dark based attacks and water based attacks. When flames creates fire and pools of lava and If they are put out he will get slightly hurt from the fire being put out but this only goes with the fire that comes from him and if flames makes thing too hot using his ability too many times he will instantly be knocked out. Flames' magma mode only lasts for an hour and he has a trouble controlling himself in this mode. To get him out of the mode you have to calm him down and he'll change back or the time will run out and he'll change back, but if the time runs out he will be knocked out for an hour.
Combat Style: N/A

Background
History: (will be revealed through Rp)
RP Sample: (its Draken) 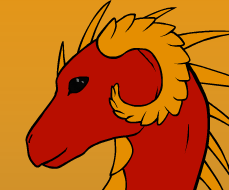 After speaking with Celes, you cannot have the ability to control lava or volcanoes because a) Lava is superheated rock, and volcanoes is more about the shifting of plates, so both are in-line with the earthwings than firewings, and b) its been taken already by Rii. Note, unless Flames is an Earthwing hybrid, you will need to change Flames' abilities so that they are restricted to fire manipulation.
_______________________
Sly's theme. Enjoy!

ok first off, I had the lava conversation with Arkhor before and he said it was ok and I don't know why all of the sudden the volcano abilities are bad when they've been there ever since I got Semi God, but I guess I will get rid of the Volcano abilities, but I already talked to Arkhor about the lava stuff, he even gave me a badge saying God of Fire and Lava and I did not tell him to put lava there. I guess I will result back to my other idea as the Semi God of Love and Fire, which I was going to do there but I never did cause I thought it was stupid, but now I have no choice
_______________________
Alts: Sparks, Alanare, Draken, Snowflake, Shunji, Siaga, Lunar, Paradox, Virsha

Ok, Rii has said it was fine as long as she gets to keep her lava abilities, so the Lava part is staying there. However I will not be bringing the volcano part back and I will add a new ability, once that ability is added, I need a reapproval
_______________________
Alts: Sparks, Alanare, Draken, Snowflake, Shunji, Siaga, Lunar, Paradox, Virsha