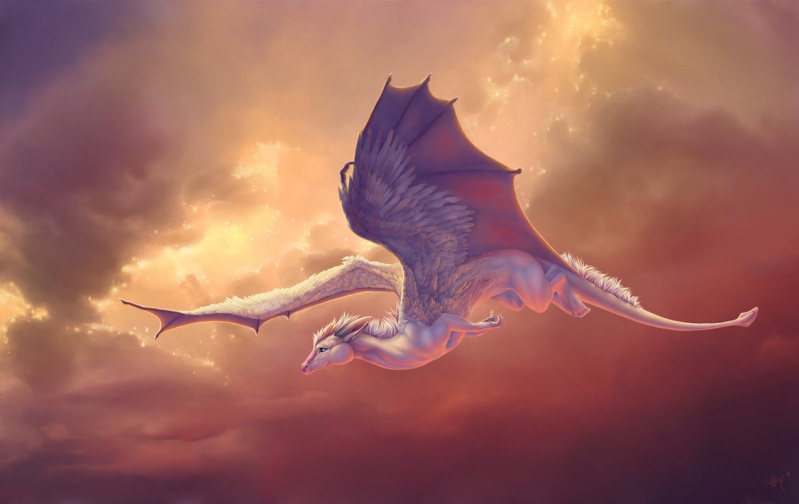 Personal Info
Name: Miyuki
Alias: Yuki/Cloud Jumper
Age: 30 years old
Gender: Female
Sexuality: Heterosexual
Personality: Miyuki has never been attached to anything. Her whole life she has been like the wind, sweeping in and out of peoples' lives. She remembers a time when that's what her father used to say, that it was a family trait, and like that their family had dissipated like dust in the wind. Yuki is a wanderer, though not lost. It's hard be lost if you know not where you go.

She tends to be fickle regardless of circumstance. She is not quick to trust, or even to engage, someone she doesn't know. She has yet to discover the part of herself that is comfortable at any other time than being alone. However, she is intellectually curious and forever wondering after other dragons. The smaller creatures of the land intrigue her, especially those that fly such as moths and hawks.
Interests: Yuki loves to travel. She enjoys being a rogue (perhaps because she's only ever been a rogue) because the freedom suits her. Her dream is to travel to all the lands of the earth and to reach the highest point on the earth. She is a lover of natural vistas. Being a rogue, she appreciates the value of being alone.
Dislikes: Though she would never back down from a fight, she hardly enjoys it. Getting her feathers dirty isn't one of her favorite tasks either, especially when occurring in addition to a fight.
Fears: Above all else, Miyuki fears the water. The dark, unseen depths are her true weakness and natural opposite, being a lover of the highest heights. She also fears capture, since being able to fly wherever she wanted whenever she wanted without obligations to anyone has always been an option for her.

General Appearance
Height: 35 feet
Scales: Her scales are an iridescent white and extremely reflective, especially near her tail, as are her feathers that dominate the upper portion of her wings.
Eyes: Sky blue
Appearance: She has a very small build, stout and muscled from years spent on the wing. Half of her body is lined in white feathers that increase her aerodynamics and keep her warm in high altitudes. The scales on her body are perfectly preened- without chips or bent portions. This is not for lack of extreme circumstances, but rather vigilant care and perhaps a vain sense of self. Her tail is the most armored part of her body, outdoing even her underbelly. Her head is shaped like a delicate "V," with two grey horns protruding in alignment with her eyes. Her spine is dominated by feather-like fins that guide her around tight turns. She is 30 years old, so her growth spurt has passed and she will likely be ~30 feet for the rest of her life.

Tribe Information and Status
Tribe: Rogue
Rank: n/a
Family: Miyuki's family split up when she and her brother were able to care for themselves for matter of safety if nothing else. Though never explicitly told to her, her investigations into the tribes' workings have lead her to believe she has lineage in both Lightwing and Skywing tribes.
Mate: N/A
Hatchlings: N/A

Skills and Abilities
Strengths: Though also her weakness, perhaps her greatest strength would be her size. With little armor weighing her down and a small build, she is lightning fast and therefore a superb flier. In addition, being an inherently curious dragon, her intellect lends her certain advantage in fights.
Special Abilities:

Weaknesses: Yuki's greatest weakness would likely be her size. She is an extremely small dragon and, though well-protected from the elements her body is composed of more feathers than scales, so she has little armor for protection from physical damage. Though she is sometimes an adequate thinker, she is often rash, which has proved to be a significant hurdle for her. In addition, she is only 30 years old and still has much to learn in the way of combat and overall life lessons.
Combat Style: Because her small size is her greatest strength and greatest weakness, she prioritizes speed and ranged attacks over all else. She is not a particularly strong fighter; to adjust for this she uses her head to think up advantageous strategies to give her the upper hand and win her the battle.

Background
History: (I'll figure that out as I go.)
RP Sample:
The shadow of the mountain loomed over her as she lifted her head from beneath the mound of snow. Her head cut a sharp V into the snowbank as she unwrapped her wings from around her torso and wriggled the rest of her body from its hiding place. She yawned and watched as the sun dipped below the distant line of trees, bringing a pang of loss as the mountain's gorgeous vista dripped away into the black of night. Her shoulders were rolling as she approached the cliffside, seemingly of their own accord, and her mind wandered.

Sleeping during the day was, she decided, a simply detestable necessity. She hadn't the slightest idea where she was anymore, only that she was surrounded by snowy mountains and acres of luscious evergreens.  Her goal was still northward- of that she was sure. Even more certainly, she was sure she was in some tribe's territory, and if flying at night to keep hidden and sleeping during the day would lessen the chance of an unfavorable interaction then, by all means, she would take it.

It was a cloudy night; not even the moon could reflect off her crystalline scales and signal her position. She opened her wings to full extension and tested the breeze up the outcropping below, exercising her coiled muscles. 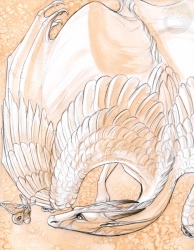 Hello!  Welcome to DRF, I hope,you enjoy your stay and that we can get your character approved asap!

For Dislikes: I count only two, her dislike to fight, and dislike to get dirty.  Three is requires, so add one more and this category will be good.


In strengths:  please mention exactly how fast you can move.  Keep in mind the average speed of a SkW is 170 mph, and as you are a SkW/LW hybrid, it will need to be less than a purebred SkW.
When describing her intellect, please give more details on how her intellect gives her advantages, what advantages they are, ect.  I later see that you also say she is rash, so when is she rash?  When is she mentally collected?


Abilities:  your second ability, using your tail scales as a mirror would probably be better suited in strengths for intellect, unless your tail can become unusually shiny.
With the speed boos ability, I would think you can reach SkW speeds of 170mph, so just make sure to specify this.


Combat style:  when saying she fights by using speed and ranged attacks, what ranged attacks does she have, besides the mirror ability?