Insert Image Here
Personal Info
Name: Talon
Alias:
Age: 460 human years, which in turn makes him 16 in dragon years.
Gender: Male
Personality: Talon has only two sides, with many branches to his personality. His first side is gentle and sweet. For the most part you will find Talon quietly enjoying the rays of the sun. This side also comes with his loyality. To those he calls friends, he will forever be loyal, always sticking by their sides and having their back. Should be be done wrong though, you can believe he will question you from that moment onwards. He is faithful in anything he does, for cheating isn’t in his way of doing things. If it’s worth doing, it’s worth doing right. He believes in hard work being rewarded, and a bad behavior being punished. Talon isn’t one for being tricked or played, games aren’t hardwired into his mind. Talon holds those dear to him, closely. Should one of them be done wrong he tends to seek revenge on those who hurt the ones he holds close. Punishment will be swift, or well, depending on the hurt one has caused. All in all, Talon is a peaceful creature. Only taking a vendetta when there is one to be dealt with. He hates drama and to argue. For the most part his nature is that of a loner.
Interests: Talon loves to sleep mostly. He believes in a good nights rest. HIs favorite place to nap is just outside his cave, basking in the warm sun rays as his scales turn warm to the touch, Tossing and turning as one side would become too heated. Another thing Talon loves to do is fly at night. Granted it is basically in his nature to fly at night, he actually enjoys the nighttime better. Glazing at the stars and moon as they shine brightly over the dark covered earth. Looking at the constellations as O’Rion takes over the night skies along with other stars. Lastly, but not least, he loves to hunt. The thrill of the chase is what hooks him. The wait and savoring of his meal to come, hiding within the shadows of the night, for nighttime is when he mostly likes to hunt. Stalking and hunting down his prey.
Dislikes: Talon as three things he strongly dislikes. The first of those things are to be in conflict. He hates to have to fight or to be pushed to do so. Even though should it be to reclaim the pride of someone he hold dear, he shall do so. Not one for fighting, he also hates to argue, why some dragons insist on wasting a perfectly good day having a word skermish over probably next to nothing, baffles him. For he’d much rather make peace and move on with his day than stand there and fight another. Lastly, he isn’t too fond of being told what to do and when to do it. So striking out on his own was his best idea ever. Talon was never one to listen every well, which makes him a risk taker in some situations.
Fears: Talon normally isn’t afraid of to much, one thing that always had haunted his dreams is loosing someone dear to him. Rather it be a friend, or maybe even a mate. Not being able to help them is a nightmare for him.

General Appearance
Height: Talon is 135 feet tall. Getting his height from his father.
Scales: Having a mixture of both Nightwing and Firewing in his blood, Talon is a strange mix of black and a tint of red. His body is covered in thick scales that lay flat against him. From under his chin, belly, and tail are all pitch black. His upper scales are a dark crimson red, hinted over a black base of the scales. His wing bones are the same coloring as his upper scales, as for the flaps of his wings are black as his underbelly.
Eyes: Talon gets his eye coloring from his father, they are a orange-ish color, turning a deep red when angry.
Appearance: Talon isn't much of a looker. He looks like a Nightwing, has the slight temper of a Firewing. Crimson and black scales cover his body. Claws as sharp as thorns. His eyes a soft glowing orange, until angered, then turning to a deep red. He has no weapons, other than his fangs and claws.

Tribe Information and Status
Tribe: Talon shall be a Rogue for a while, and then maybe join a tribe later on. So Rogue for now.
Rank: Rogue.
Family: N/A
Mate: N/A
Hatchlings: N/A

Skills and Abilities
Strengths: Talon is good at tracking. He as a well equipped nose and keen eyes. He is super cunning when it comes to catching his prey. Ambushing them into traps.
Special Abilities: Talon doesn't really have any amazing abilities other than his tracking, he is just as plain jane as the next.
Weaknesses: His past. His past is his weak point. Since he didn't really know his father, and his mother left him in the cave she birthed him him. The topic is touchy.
Combat Style: He uses his cunning mind to out think the other dragon.

Background
History: (What is your dragon's backstory? Optional)
RP Sample: Shadow's Return - Age of the Wolves
The paws of a lone wolf silently walked across the ground, leaves giving her presence away as they were the only sound she made. It was beginning to turn dark as dusk approached. Animals scurried for their homes to keep safe from the predators of the night. The she wolf had been traveling for a very long time, her pads hurt from walking and then a short trot. Ears relaxed as she had become tired. The wind whipped through her ebony fur, giving her a gentle push with every current. Looking around her bright blue eyes took in the scenery, stopping and turning around she saw the most beautiful sunset. The golden rays had begun to caress the colors of fall. Brightening them into burning reds and oranges as the sun fell asleep behind Cathedral Mountain,leaving a large shadow upon the lands before her. She had been gone for about a year now, questions quarreled in her mind, but she pushed them away. Changing her direction of travel the fae pressed onwards. The only thing that kept her company was the wind and her very own shadow.

The fae’s name was Shadow, she had once been of these lands that she now seeked once again. Memories flooded her mind as she had caught wind of the Helidos pack scent. Her mood then changed, and soon changed again with questions and explanations to tell. The memories of first joining the pack came back to her, as once a beautiful wolf names Aurora had accepted her into the pack. She first had met a wolf just like herself named Fel, but she also remembered them growing apart with the likes of Silver coming around more often. Shadow smiled at the thought of Silver, then frowned; he may not even be alive anymore. Or maybe he had moved on with her being gone, she couldn’t blame him. Moving onto her old friends, Lead Hunter Eclipse being the first of them, she couldn’t wait to see him again. To maybe hunt with him once more, she smiled wide then. Her speed picking up slightly, ears erect, and her body energized now. Shadow never knew she could miss so many at once, but she needed the pack. Hopefully they needed her, and would allow her to return to the place she called home.

Knowing she was about four miles out from the border lines, Shadow slowed down; she needed to think for a moment. Would they allow her to come back? Would anyone remember who she was for being gone so long? She wondered how much had changed in her time of absences. Clearing her throat as she was now running again, she wanted to return home and be with the ones she loved the most; her pack. If they placed her as an Omega she wouldn’t care, as long as she was with them. She would be able to work her way back through the ranks, hopefully. But it was worth the a try and work to do so.

After a few minutes of running with the wind, Shadow was but a few feet from the border lines. Breathing heavy she waited for her body to settle and relax. She sat there for a moment, dwelling in the moment she first sat there on that flat rock. Coming back to the real world Shadow lifted her head and sent out a howl of happiness, mixed with a tinge of eagerness. Now all she had to do was wait, hopefully someone would come and answer the call soon. For Shadow was anxious, her heart pounded in her chest, not from the run but from being slightly excited. Her bright blue eyes watched as the sunlight still glimed upon the ground and leaves. Leaving a dim glow on her fur and the area around her. Holding her head high and ears up, she watched. 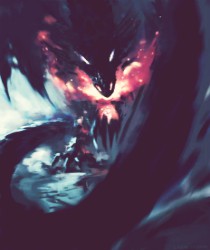 Re: Talon - The Teenage Rogue

Re: Talon - The Teenage Rogue