^^ Not By Me ^^
Personal Info
Name: Daisy
Alias: Daisy, Daisy, DAISY! The purple water dragon aka Nougat. (You figure out why)
Age: 12 years
Gender: Female
Personality: Daisy is rather a jolly and sweet Seawing who is very inquisitive about life. She often puts too much trust onto others as she is very neutral about other living beings, she always tries to help someone if they are not being nice to her. The only way to break her loyal towards you is to purposely hurt her and it will take a long time to regain her trust back but they, that's your consequences for doing it in the first place. Daisy is very interested into nature which is why she often leaves the safe seas to explore the land where dangerous life resides, because of this, it makes her a very bold Seawing. Because of her name, Daisy shows delicate in flowers and as being an artistic girl, she often weaves the flowers into flower crowns and leis. Sometimes but not often, she can get side-tracked or procrastinate... Though Daisy is often a nice and cheerful dragon, she can lose her control of feelings and go all... Mentally unstable from the amount of hate/love or lack of social activity she can get from others, so in order to prevent this from occurring, keep Daisy at her usual social needs.

Interests:
-The beauty of Nature
-Flowers, but Daisies her most favourite
-Bubbles
-Cheering up others
-Other creatures, either on sea or land...

Dislikes:
-Rude and arrogant dragons as she always try to be nice and helpful to others and they are just refusing her...
-The destruction of nature, she accepts natural causes as they aren't caused by some dragon's powers.
-Unnecessary violence, she finds it pointless as there is other solutions to solve their problem.

Fears: Daisy has a fear of heights as in falling from the sky and injuring herself so that's probably why she is never keen on flying.
Daisy also fears dragons who is more 'powerful' than her and also doesn't have a nice attitude towards others, she doesn't really mind if the dragon is nice but being rude of saying nasty things to others just make Daisy feel she is being threatened.

General Appearance
Height: 15 feet the height from feet to tip of her fins.
Length: 20 feet from nose to tail tip
Scales: Smooth and slimy, they can range from colour pink-purple to light blue- light violet.
Eyes: Dark blue.
Appearance:
Daisy has an Axolotl like appearance to herself, except that she has spurted a small pair of wings onto her body. They are nothing more useful than for gliding and showing off the colours reflecting off her wings.

Skills and Abilities
Strengths:
-Though Daisy is a weak fighter as she isn't built for strength and can only glide for a short time, however, she is a very quick and swift swimmer to make up for those disadvantages. Though she isn't as fast and on land she is agile enough to dodge oncoming attacks.
-Daisy is often so happy and full of positive thoughts  that she seems to rarely show her sad and negative feelings and but when she somehow does, you know things will go wrong...
-She also has powerful magic, bubbles isn't a common thing for a dragon to cast!
Special Abilities: Bubbles!~ Daisy can summon bubbles as her magic, there are two different types of bubbles but 'Bubbles'o'Happiness' is the most common for her to summon.

~Bubbles'o'Levitation- Daisy can create a single bubbles at once that is powerful enough to carry things inside as they float around, she can levitate them to her will. These bubbles can only be 35ft at max and they can carry a single thing twice of Daisy's body weight but if it's carrying something more heavier than Daisy, it will levitate slower. Since Daisy can put creatures (including herself) inside these bubbles, it is also ideal for travelling underwater for non seawings whose sizes are under 30ft as well as have weight that the bubbles can carry could travel along with her underwater (until the bubble runs out of oxygen...) These bubbles are also strong enough to be stood on as well. However, they are easily popped if someone inside or outside poked it forcefully with something sharp etc. Their teeth.

~Bubbles'o'Happiness/Calming- Daisy creates hundreds of small bubbles in one blow. If the Aqua bubbles which resembles happiness hit someone, they makes them happier for a short time. And the Calming bubbles which are blue in colour hit someone, it gives them calm thoughts, making them less likely to fight. Since these bubbles are small, an amount of them may be concentrated into a dragon larger than her before they will start to take effect.

Weaknesses:
-Daisy is very valuable on land because her scales don't provide enough defense against any attacks. She also has no elemental resistance against anything besides her element so her only protection from these attacks is to stay underwater.
-Daisy may can be too trusting of others and won't recognise the danger they're leading her to...
-Since Daisy can get side-tracked she can forget what she was doing before.

Combat Style: Daisy is a pacifist as she isn't build for battle but if she was forced into battle, her only physical attack lies in her tail. But usually, she tries to make the people stop fighting by blowing happy bubbles onto them.

Background
History: N/A (May be revealed but it's a boring story of Daisy's happy childhood)
RP Sample: Kyuurei here 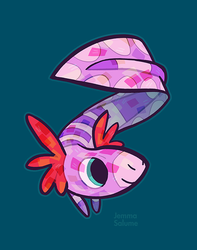 Daisy Daisy Half Crazy: Daisy! Daisy is Half Crazy!

(Such Craziness others believe that I am filled with them!)

~Help yourselves a flower crown~