Personal Info
Name: Shenlong
Alias: Shen-Lung Aka "god dragon" or "spirit dragon"
Age: 100,000 +
Gender: Male
Sexuality: Heterosexual
Personality: Shenlong is a very peaceful and docile being, he never if ever shows anger, hostility or negativity towards others whom he views as friend or ally. This also includes family, Shenlong, despite his aggressive appearance, is a very kind and gentle beast, he tends to care and nurture others. To him all dragons are considered equals in his eyes, and tries to befriend all around him, he see's no such evil in others unless provoked to think otherwise. He is very wise and will often at times give out information that would be beneficial to all around him, he tends to speak in a very soft and tender tone.

Though he speaks from his mind to others, still reflects the tone even then, he also has a soft spot for fledglings or hatchlings, as they are the youngest of all beings and need a correct way of learning. He tends to act like a father like figure, and an older sibling to those younger than most adults, as to them they are the purest form of innocence, and innocence is a wonderful thing to be around. Shenlong although not a fighter by heart, will engage in combat if he see's that his life or another is in danger, for to him if a life is taken, the flow of energy is disrupted.

For him to see another's life taken away before they grow old, saddens him but if nothing can be done and the battle situation becomes to grim, he will take all those who are injured away. And will return once all who are too young and weak to fight are safely hidden and proceed to aid his fellow dragons. Shenlong though despite his wise appearance, and tender loving nature is a very lazy dragon, and at times will sleep most of the day. Shenlong doesn't like to waste unwanted Qi, and would prefer only using it when need be.

Hs is a very mature dragon and tends to act accordingly to his age, he will refer to people by their titles rather than their names unless given the chance to by such individual. He is also very humble and will respect others to a great degree, by if he were to meet a king of humans or dragon. He would give them the common greeting that all others would to him, as well to that he isn't all to prideful or envious. He doesn't flaunt his power nor does he tell others of it for it is not important, in short, he is a brilliant young beast who is wise and intelligent while being the most mature being there is.


Interests:
1.) Peace: Shenlong wished for nothing but peace to be around him, for it is the purest form of Qi to him, and with plenty of Peace, he can bask in as much Qi as he wants, for it also holds many other positive aspects, wonderful naps, and safety of others and no violence.
2.) Naps: Shenlong prefers to nap most of his time, to him it allows him to regain his Qi and rejuvenate his pool of Qi as well, it also allows him to feel happy and at peace.
3.)
4.)
5.)

General Appearance
Height: 39.624 meters (130 feet.)
Scales: Hexagon shape, smooth, and crystal blue.
Eyes: Crystal Blue
Appearance: Shenlongs head is like a camel's, his ears like a cow's, his neck like a snake's long and slender, while his  belly is like a frog's, scales like a carp's, claws like an eagle's, and paws like a tiger's. He has whiskers on the sides of his mouth and a bright pearl growing under its chin. He has massive ornate horns and a large amount of fur along his head, under his jaw and along the joints of his arms and legs. Along his head, arms, chest, and shoulders, Shenlong holds a golden armor that states in his lands of a full grown Lóng or dragon. Like most of his kind who rarely have wings, Shenlong has none as well and breathes clouds, not fire. His voices sound like jingling coins, ringing bells, or clanging gongs depending on his mood, which can also when angered sound like a thousand thunder storms. And without his wings, Shenlong has a "poh shan," a growth on top of his head that pumps air in and out, lifting him high in the sky. Winds enable him to sail through the air. 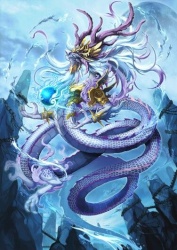