Yo! Name's Rogue, I think you guys use APC though so, I'm guessing everyone'll forget that and call me Hake instead. That's cool with me. I think it's a type of fish. It just sounded like a cool word.

Have a blurb. Erm, I'm 22, a chick, a field studies tutor (which means I teach geography & biology, but like, do the outside fieldwork stuff, not the boring AND THIS IS WHAT A CELL IS), live in England, enjoy maps a little bit too much, read a lot of books, and buy a lot of fairy lights. Which is good, because it means I can sit in the dark this evening. I went to see the new Star Wars, but it was only on in 3D, and 3D screws with my eyes, so now my face hurts from eyestrain. So I'm sitting in the dark. Film was pretty good though. Not worth the 3D, but what can you do. I live where I work, in a big haunted mansion. That means I normally get woken up at 8am on weekends by screaming kids outside my window playing football. On the upside, when there aren't any kids in, I live in a mansion and play Sardines in the pitch black. The ghost hasn't joined in with any games I've been part of yet.

RP-wise, I've been writing since I was 13, which was, my gawd, 10 years ago almost. My primary genre is fantasy, but I like to branch out as well. My speciality is flawed, slightly rubbish characters. I like friends-relationships and love/hate. Perfect romances bore me. I like to plot, but also like to spring plot twists. Don't be scared to ask for a RP. 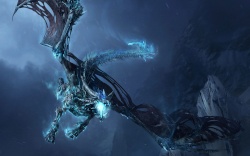 Hey there and welcome to the forums ! I'm Hyruu, one of the administrators here.
Since we have a whole group of dragons named Rogues I guess we're probably going to use Hake instead ^^
I also hate 3D films but for another reason. I have glasses, and let me tell you it's so damn annoying to have to put on a SECOND pair of glasses above the first ones ! They really haven't thought this when designing the whole thing...
Well since you already made your app I guess there's no point in mentioning the New Member's Guide, you probably already read it. If you didn't, well it's in the quick links.
So hoping to RP with you soon !
_______________________
Characters : Hyruu, Asher, Loque, Mei, Aakesh, Seyn, Rhune, Nara, Nisha

Oh man, I can't imagine the annoyance of having to wear 3D glasses over regular glasses. Not what I would enjoy!

Three-D gives me headaches, I couldn't imagine having to look through hose glasses with actual glasses. And yes, Hake are a type of cod, so a fish.

Such headaches, lots of water and some paracetamol helps do away with those after any film... sometimes

That's a weird mix of subjects to study Oculus, didn't know you could pair them! Pretty cool though. Basically yeah- kids come to my centre for a couple of days to a week, and do their coursework for biology looking at plants or invertebrates, or geography studies on coasts and rivers and stuff like that. Maybe chuck in a campfire or a night walk or something like that as well. It's pretty good- if I get a horrible group, I only have to deal with them for a week!- and I get to be outside lots, but the hours can be kinda long in the evenings and weekends sometimes, which is a downside.
_______________________