The border of the SkyWing territory, a rather peaceful little patch of land in the ever-raging world. It was this little fact that the FireWing found disgusting. He knew for a fact that there never was true peace. He could nearly feel it, war was on the way. He couldn't exactly tell when or where but it would happen. And he knew that he would be firing his forge again, one way or another.

However, this was not the reason he was here, close to the land of the eternal storm. He was here because he had recieved word before that a SkyWing vulcan was asking for him. Personally be was surprised someone would actually be asking for him specifically. He didn't consider himself to be any special, he was good but then again, every vulcan was supposed to be good in his profession. It just seemed to him that there was something about him that made him standing out among the other vulcans, not that he would care about it too much.

Well now, I wonder how long it will take for whoever wants to see me to get here. I mean, I should have had the longer way and I am still the first here. Well, it doesn't matter really now, does it. I don't have anything important to do right now now will I in the near future. As long as my kin isn't fighting, no one will ask for my hammer to craft once again. 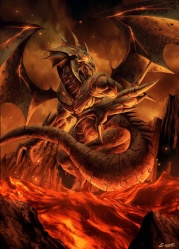 The air crackled, storm clouds frothing over the clear sky. The lightning leaped between the built columns, and two points of color were visible within their depths. The Storm had followed the Vulcan, and would until the end of the SkyWing border. There was too much magnetic polarity within the border for it not to follow the dragonesses in the clouds- one who looked like a steel statue, and the other who looked like lightning herself.

Bright blue struck the ground, just as the steel-coated dragon did. When the electricity leveled out, crimson eyes stared at the Firewing with a calculative gaze. Beside her, the larger eight-winged dragoness glared. The latter's build was much like that of her stature- a Guardian. Coiled and taut, her gaze brimmed with suspicion.

"Abyss, are you sure that you want to meet with a tar-wing?"

The silver female was obviously insulting the FireWing vulcan, disgust on her face an obvious dismount. The female she had referred to gave her a sharp look, annoyance seething from the pupil-less red eyes.

"Styll. I would prefer you don't insult Vulcan III. He's one of the few properly named Vulcan's who know how to do their job- and well at that. I've read so many theorems about him from scholars, and have even had the FireWing elders talk about his armor and weapons in reverence- they saved their lives. Though our Tribes may look the other way when together, I'd prefer if you didn't insult someone I was trying to learn from and looked up to. If you're going to dishonor the drake, keep it to yourself."

The words came from the one called Abyss in a calm, gentle tone. Though her voice was quiet, it was obvious that they carried some form of power as Styll obeyed immediately. The only sign of bitterness upon the silver-winged dragon was the look in her eyes as she looked over the male. Taking the dismissal for what it was, she then stepped back- allowing the two Vulcans to converse out of earshot, but still within eyesight.

Turning once more to Vulcan III, Abyss let a small smile make its way across her face.

"I apologize for my comrade's rudeness- her family was killed in a skirmish between our two Tribes. The Gods gave her a bitter heart, but a sound soul. Now then, as to why you're here..."

It was rather obvious that the SkyWing wouldn't come alone, after the history the two tribes have with (or rather against) each other. However, the smith couldn't help but chuckle at the remark the (obvious) guardian made. Of course, he overheard their small conversation as they weren't exactly subtle or quiet but it didn't quite matter much to him. What he picked up though was that the young vulcan actually knew quite a bit about him, at least when it came down to his craft.

"Humor me, from what I picked up so far, you hold me in high regards and wish to learn from me. It is rather obvious you found quite a bit of information about me and my profession. Let me make one thing clear: If you are learning from me, you will work under my rules. You will follow my advices to the latter. On top of that, I am going to inspect the quality of your forge and if I am not satisfied I will make changes to suit it our needs. If you aren't good with that, I might as well leave.

With that out of the way, he turned his head slightly to the Guardian and grinned.

"Tar-Wing, really? And that trash comment coming from an oversized storm cloud? Please, I've had worse."

Styll's reaction was immediate. Her wings spread, the deadly blades trembling as she snarled in response.

"Lighten, Styll. I've called you worse and you've fared harsher verbal from our lieutenant. Vulcan is my guest, and we shall treat him as such."

The Guardian made a disgusted sound, though she calmed down. Looking back to the FireWing, Abyss made a small frown.

"I've made several adjustments according to the records within your Tribe's library. Though you may do as you wish to make it more comfortable. I must warn you, though.The Storm Forge is not to be mocked. It sits at the highest cliff in the face of the Metal Mountain, which is due mainly to my need for electromagnetic polarities to craft my armor. I apologize, but I musn't allow you to interfere with the setup I have. Where we will be working is underneath my forge, in the Secondaries. The metal mountain feeds its hot inner core's heat up to the face of the cliff, so I had my Guardian carve it out with me. Lightning also has a channel down into the Secondary, but it has to be set up to forge with. The rod isn't grounded, and won't be unless you're using it. Also, I apologize- my Guardian has to remain with us until the duration of me apprenticing beneath your wing ends."

Finishing, she offered an apologetic smile to the drake before turning to Styll. A look was conveyed between the two dragonesses, Abyss relaxing slightly in response to the silver dragon's irked glare.

Vulcan simply let out a short grunt as he heard the terms of the mentoring. He was more interested in seeing the forge, how it's set up and how it will work with the surroundings. His own was set inside a dormant volcano where he could use the temperature of the molten rock in order to utilize metal deemed useless by most since they couldn't bring up the consistent heat to melt those metals. Lifting his hammer and setting it on his shoulder across his back, he turned back to the Skywings.

"Hrmpf, as long as that oversized serpent won't stand in our way and just remain at the end of the room, I couldn't care less about it. I doubt she could utilize any of what I am going to teach you. Well then, I accept your conditions as you accepted mine. Let us be on the way then, I'm not here to waste any more breath."

A smile was obvious on Abyss's lips, just as energy crackled around her. Styll's look was one of disgust, as she lept into the air and began to immediately fly circles around the Vulcans.

Taking off, the light blue dragon joined the steel blur in the clouds. A playful loop was done mid-travel, as though welcoming the Firewing into the Skywing domain.

Vulcan simply sighed at the Guardian's hostility. He wasn't used to others being so negative against him. Sure, he was used to getting ignored but not such negativity. Then again, he wasn't really minding it too much. He couldn't allow himself to give it too much thought. On top of that, it was a hate not directed towards him personally but against the entirety of the FireWings and because of his open world view, it hit him even less.

Deciding that the job he was about to take was more important than his own little thoughts about the matter, he held his hammer with both claws across his shoulders and dashed into the air, staying close to his new apprentice.

"Now then, I am not familiar with this place. You'll have to guide me. And you're little watchdog shouldn't worry about me, I can handle myself pretty well, even against lightning."

"Styll won't be an issue right now. She's got her orders to watch, and only step in if there is something detrimental to my health. Honestly, though. She's got a genuine heart. Just.. Not an open mind. Alright, we're following the storm. It doesn't prevail over the entire SkyWing territory, merely the parts that are closest to my Forge."

The wingless dragon attracted most of the lightning strikes, unfazed by the electric currents. Twisting through the air, she lead the larger drake towards a silver ridge of land. The cloudburst was thicker around the top, obscuring the peak. Rising through the clouds, Abyss lead Vulcan deeper and deeper into the tempest. Wind battered against each of the dragons, though the SkyWings flowed and wound through the air as though they didn't notice the whirlwinds slamming against them.

The clouds stopped immediately, the boundaries of the dragoness's forge a wall against the storm. As though there were a bubble in the middle of the gale, iron rods jutted out of the mountain, drawing the energy from the squall and channeling it into a cobalt-blue basin, which glowed a bright cyan light from the amount of electrical current flowing through it.

"Welcome, Vulcan, to the Storm Forge!"