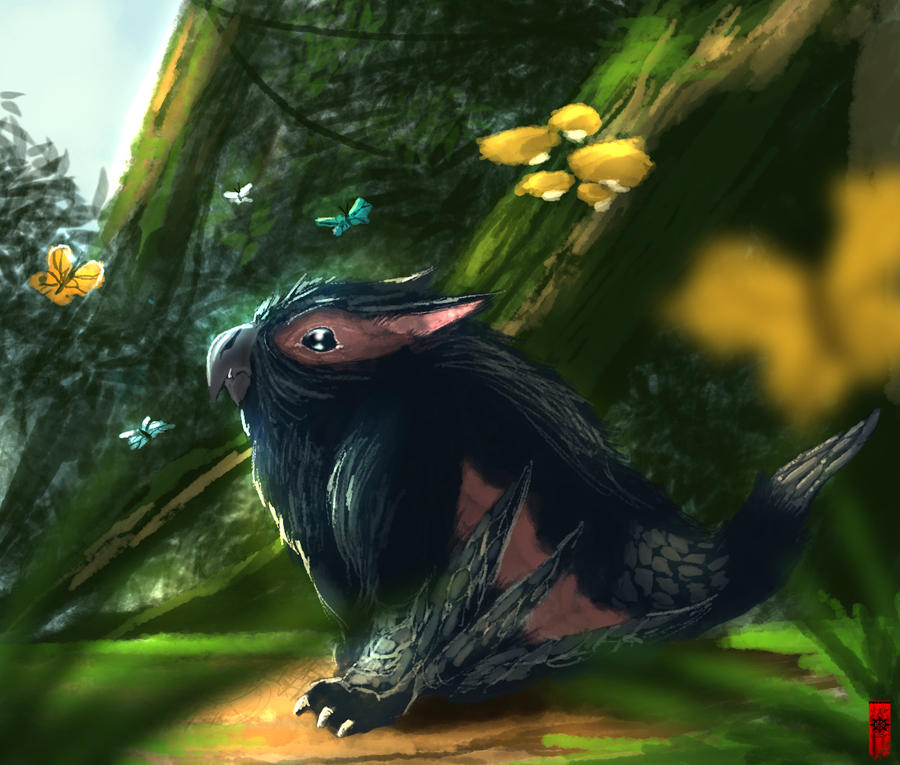 Personal Info
Name: Narga(cuga)
Alias: Tiny One (at least Eysseth called me that in the cbox rp)
Age: 61 human years (2 dragon years)
Gender: Female, I'm too adorable to be a guy
Sexuality: Uhm...I dunno yet. Hetero?
Personality: As a hatchling, Narga is curious of her surroundings, trying to learn something new every day. Since she's very young, she doesn't have much of a personality aside from her innocent curiosity, sniffing and licking things new to her. Also, since she can't see very well (almost completely blind), she is quickly scared of very large dragons. However, if something starts growling at her, she growls back, trying to scare whatever it is away.
Interests: Stalking around, learning new things, rolling around
Dislikes: Thunder, rain, large, imposing dragons
Fears: Thunderstorms due to her sensible ears

General Appearance
Height: 4'8"
Scales: Black scales hidden beneath a layer of black fur
Eyes: Black, shining like an onyx
Appearance: Narga looks more like a cross between cat and bat than a dragon. Her eyes shining black with red fur around it. Atop her head are pointy bat-like ears, hearing sharper than standard dragon ones. Her form is like a cat, covered in fur with scales beneath them, all in black. Her forelegs have bat like wings that can be extended to enable basic flight and glide. Her tail misses the fur halfway up to the tip and instead hides small spikes that can be extended for the tail to act like a club and can actually be fired off of the tail. She also features a beak-like muzzle.

Tribe Information and Status
Tribe: NightWings
Rank: Hatchling!
Family: There are no traces of Narga's parents. She's never seen them.
Mate: Please, I'm too young for that.
Hatchlings: See above.

Skills and Abilities
Strengths: Although she's still very young, Narga is very good at stalking around in the shadows or at night, turning almost invisible in the dark.
Special Abilities: Aside from her ability to hide in the dark and the spikes in her tail, she has the ability to perform echolocation. By making clicking noises, she produces a unique sound that is reflected upon coming into contact with anything solid/semi-solid. The sound is reflected as an echo, revealing the relative depth and form of whatever reflects it.
Weaknesses: Well, she's a hatchling, meaning she's young, small and inexperienced to the concept of actual fighting. On top of that, she's almost blind without her echolocation, only being able to see the brightness of her surroundings. Her scales are also relatively soft.
Combat Style: Narga has never truly fought before, only hunting small animals for meals. When she hunts, she prowls upon her target, preferring dark places and being able to "feel" shadows surrounding her, hiding in those. When the target is close by, she jumps onto it, her unique form grantint her quite the agility. Using her tail as a spiked club, she slams it repediately into her target until it is dead.

Background
History: Aside from finding herself alone in a dark forest when she woke up before hiding in a cave when a thunderstorm broke loose above her, there isn't much history.
RP Sample:

It was dark...she was alone. When she woke up, there was no one around her making her feel better. She was scared, she might not be able to name that feeling but she knew what it felt like. It gripped at her, feeling cold. Suddenly, a flash to her right. She didn't know where exactly it was but she could tell it wasn't good. Turning to her left, she dashed away, clicking over and over again, "seeing" her way through the forest, trying to get away from everything.

A thunder boomed above her, it was loud and it hurt her ears. She was running for what felt like forever, not finding a way to get away from the sound, the flashes around her and the rain. It was wet, it was cold and she didn't like it. Suddenly, a large opening before her in a wall. She ran inside, finding that there was a ceiling, protecting her from everything coming down on her from above.

She cowered deep inside the cave, though she knew she was safe from everything outside, she was still scared everytime she could see those flashes, everytime she heard the thunder booming into her ears. She made clicking noises, this time not for sensing her surroundings...but to call for anyone to protect her...trying to call for her mommy.